Christian Traitor of the Week

Many Confederate preachers condoned slavery, and the right to hunt them down when they ran away. ISIS took many slaves in the name of Allah. Fake crhjristian TRAITORS terrorized millions of Americans. They loved betraying their country – to this day!

With one eye on God, and the other on other nations, this Traitor conspired to murder loyal Americans. Traitor Trump degraded the Kurds saying they fight over sand. The Preacher General fought to make women slaves – and her children.

The diplomacy of the American Civil War involved the relations of the United States and the Confederate States of America with the major world powers during the American Civil War of 1861–1865. The United States prevented other powers from recognizing the Confederacy, which counted heavily on Britain and France to enter the war on its side to maintain their supply of cotton and to weaken a growing opponent. Every nation was officially neutral throughout the war, and none formally recognized the Confederacy.

Mark Perrin Lowrey (December 30, 1828 – February 27, 1885) was a Southern Baptist preacher otherwise known as the “Preacher General”. He is known for being a Confederate brigadier general during the Civil War, for his works in the Mississippi Southern Baptist Convention, and for founding the Blue Mountain College.

Mark Perrin Lowrey was born in 1828, in McNairy County, Tennessee, to Adam and Marguerite (Doss) Lowrey.[1] His parents had immigrated to America from England and Ireland, and Lowrey received no formal education.[2] His father died from yellow fever in Natchez Mississippi, when Lowrey was young.[3] In 1843, he moved with his family to Mississippi, where he became a bricklayer. During the Mexican War, Lowrey enlisted as a private in the 2nd Mississippi Volunteers in 1847.[4] Neither he nor his regiment ever saw action in the conflict, and Lowrey was mustered out in July 1848.[5]

After the war with Mexico ended, Lowrey married Sarah R. Holmes in 1849. Beginning in 1853, he became a Southern Baptist preacher, serving primarily around the village of Kossuth, Mississippi.[1] After preaching for eight years, the American Civil War broke out and his congregation urged him to join the Confederacy.[6] Lowrey also served as a captain in the Mississippi State Militia in 1861.[4]

Lowrey entered the Confederate service in 1861 as the colonel of the 4th Mississippi Militia. On December 6, 1861, Lowrey was appointed colonel of the 4th Mississippi Infantry and, on April 3, 1862, he became commander of the 32nd Mississippi Infantry.[4] He fought in, and was praised at, the Battle of Shiloh, Battle of Perryville, the Kentucky Campaign, and the Battle of Chickamauga. At the Battle of Perryville in October 1862, Lowrey was shot in the left arm but stayed on the battlefield. During the retreat which began the next day, he had great difficulty keeping up with the army. He then obtained leave and traveled to his brother’s house for safety. After six weeks of recuperation, Lowrey joined back with his forces and fought at the Battle of Murfreesboro on January 1, 1863.[7] 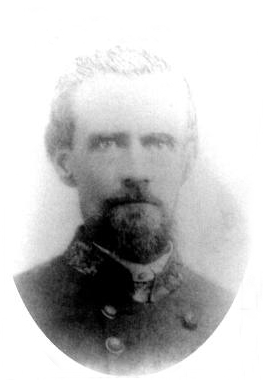 On October 4, 1863 at the age of 35 Mark Lowrey was promoted to a Brigadier General.[7] It was because of his evangelistic ties and preaching that he came to be known as the “Preacher General”.[3] In December 1864, during the Franklin-Nashville Campaign, an officer saw the flash of an enemy gun and yelled to Lowrey, who quickly lowered himself and the bullet stuck and killed a man behind him.[7] Years of bad health and other reasons caused Lowrey to resign his commission as a brigadier general on March 14, 1865, almost one month before the Confederate forces surrendered at Appomattox Courthouse.[7] Maj. Gen. Patrick Cleburne, Lowrey’s divisional commander during the Franklin-Nashville Campaign, pronounced Lowrey “the bravest man in the Confederate Army.”[1]