I have been warning my Dutch friends The Holy Trumpire was coming their way. The Dutch owned New York City that was called ‘New Amsterdam’. I posted about forming an alliance outside the evangelical-republican dictatorship to show our allegiance with the Dutch People that is extended to their allies, the Danes.

There’s a very good chance POTUS wanted to grab a title and give himself a medal after purchasing Greenland. This goes with me gifting the Lousiana Territory to my fiancé when I was just the King of California.

It is clear to everyone who subscribes to this blog that Trump is reading it, and is a copycat! Unfortunately………..I paved his way!

President Donald Trump claimed to laughter on Wednesday that he sought to give himself a Medal of Honor, but decided not to after being counseled against the move by aides.

The offhand remark from the president came during his address to the 75th annual national convention of American Veterans, a volunteer-led veterans service organization also known as AMVETS.

At the event in Louisville, Kentucky, Trump singled out for praise WWII veteran and Medal of Honor recipient Woody Williams.

“That was a big day, Medal of Honor. Nothing like the Medal of Honor,” he continued. “I wanted one, but they told me I don’t qualify, Woody. I said, ‘Can I give it to myself anyway?’ They said, ‘I don’t think that’s a good idea.’”

1853 painting by Julius Exner showing a family of Dutch descent at Amager.

In 1521, king Christian II of Denmark invited 184 Dutch farmers to settle on the island of Amager in exchange for supplying the Palace of Copenhagen with vegetables. The Dutch immigrants were exempt from Danish taxation and were given privileges such as being allowed to hunt most wild animals and having their own judicial system until 1823. Several names in the area and some surnames in Denmark give away the Dutch influences.[5]

The first diplomatic ties between Denmark and the Netherlands were established March 31, 1605 when Isaac Pieterszoon van Amsterdan was appointed ‘commissioner of the Sound’, to ensure that Dutch trade ships would return to the Netherlands. 20 years before this, in 1584, Bartholomeüs Buijs was appointed as ‘agent for Holland’.[6]

The Torstenson War was a short period of conflict between Sweden and Denmark-Norway which occurred in 1643 to 1645 during the waning days of the Thirty Years’ War. The Dutch Empire were allies with Sweden.[7][8][9][10][11]

When the Torstenson War ended in 1645, Denmark and the Dutch Empire signed a treaty, which made Denmark and Netherlands allies.[12]

In 1657, during the Second Northern War, Denmark launched a war of revenge against Sweden which turned into a complete disaster. The war became a disaster for two reasons: Primarily, because Denmark’s new powerful ally, the Netherlands, remained neutral as Denmark was the aggressor and Sweden the defender. Secondly, the Belts froze over in a rare occurrence during the winter of 1657-1658, allowing Charles X Gustav of Sweden to lead his armies across the ice to invade Zealand. In the Treaty of Roskilde, Denmark-Norway capitulated and in panick gave up all of Eastern Denmark in addition to the counties of Bahusia and Trøndelag in Norway. Holstein-Gottorp was also tied to Sweden, providing a gateway for future invasions from the south. But the Second Northern War was not yet over. Three months after the peace treaty was signed, Charles X Gustav of Sweden held a council of war where he decided to simply wipe Denmark from the map and unite all of Scandinavia under his rule. Once again the Swedish army arrived outside Copenhagen. However, this time the Danes did not panick nor surrender, instead they decided to fight and prepared to defend Copenhagen. Frederick III of Denmark had stayed in his capital and now encouraged the citizens of Copenhagen to resist the Swedes, by saying he would die in his nest. Furthermore, this unprovoked declaration of war by Sweden finally triggered the alliance that Denmark-Norway had with the Netherlands. A powerful Dutch fleet was sent to Copenhagen with vital supplies and reinforcements, which saved the city from being captured during the Swedish attack. Furthermore, Brandenburg-Prussia, the Polish-Lithuanian Commonwealth and the Habsburg monarchy had gathered large forces to aid Denmark-Norway and fighting continued into 1659. Charles X Gustav of Sweden suddenly died of an illness in early 1660, while planning an invasion of Norway. Following his death, Sweden made peace in the Treaty of Copenhagen, returning only Trøndelag to Norway and Bornholm to Denmark, but keeping both Bahusia and Terra Scania, mainly because the Netherlands and other European powers didn’t want both sides of the Sound controlled by the Danish King again. Thus establishing the boundaries between Norway, Denmark, and Sweden that still exist today.[13] 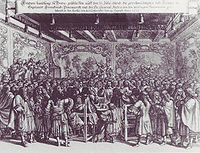 Contemporary engraving of the conclusion of the peace at Breda Castle.

In the Second Anglo-Dutch War, Denmark participated side by side with the Dutch Empire against the Kingdom of England, from 4 March 1665 until 31 July 1667. The war ended in a Dutch victory, and the Treaty of Breda was signed.[14][15]

The Third Anglo–Dutch War was a military conflict between England and the Dutch Republic lasting from 1672 to 1674. Denmark was allied with the Dutch Republic. It was part of the larger Franco-Dutch War. England’s Royal Navy joined France in its attack on the Republic, but was frustrated in its attempts to blockade the Dutch coast by four strategic victories by Lieutenant-Admiral Michiel de Ruyter. An attempt to make the province of Holland an English protectorate rump state likewise failed. Parliament, fearful that the alliance with France was part of a plot to make England Roman Catholic, forced the king to abandon the costly and fruitless war.[16]

The Scanian War (1675–1679) was a part of the Northern Wars involving the union of Denmark-Norway, Brandenburg and Swedish Empire. The war was prompted by the Swedish involvement in the Franco-Dutch War. Sweden had allied with France against several European countries. The Dutch Republic, under attack by France, sought support from Denmark-Norway. After some hesitation, King Christian V started the invasion of the Scania (Skåneland) in 1675, while the Swedish were occupied with a war against Brandenburg. The invasion of Scania was combined with a simultaneous Norwegian front called the Gyldenløve War, forcing the defending Swedes to fight a two-front war in addition to their entanglements in the Holy Roman Empire. The Danish objective was to retrieve the Scanian lands that had been ceded to Sweden in the Treaty of Roskilde, after the Northern Wars. Although the Danish offensive was initially a great success, Swedish counter-offensives led by the 19-year-old Charles XI of Sweden nullified much of the gain.

It was a war with no definite victor; the Swedish navy lost at sea, the Danish army was defeated in Scania by the Swedes, who in turn were defeated in Northern Germany by the Brandenburgers. The war and the hostilities ended when Denmark’s ally the Dutch Republic settled with Sweden’s stronger ally France and the Swedish king Charles XI married Danish princess Ulrike Eleonora, sister of Christian V. Peace was made on behalf of France with the treaties of Fontainebleau and Lund and Saint Germain, restoring most of the lost territories to Sweden.[17]

Both Denmark and the Netherlands were invaded by Nazi Germany, Denmark on 9 April 1940, and the Netherlands on 10 May 1940. After the German attack on Denmark, when the Germans used large numbers of airborne troops, the Dutch command became worried about the possibility they too could become the victim of such a strategic assault. To repulse an attack, five infantry battalions were positioned at the main ports and airbases, such as The Hague airfield of Ypenburg and the Rotterdam airfield of Waalhaven.[24] These were reinforced by additional AA-guns, two tankettes and twelve of the 24 operational armoured cars.[25] These specially directed measures were accompanied by more general ones: the Dutch had posted no less than 32 hospital ships throughout the country and fifteen trains to help make troop movements easier.

Denmark had about 700 soldiers, and the Netherlands had 1,400 soldiers in Afghanistan.[26][27] Both Denmark and the Netherlands sent troops to Iraq, as part of the Multi-National Force, in 2003.[28][29] After the Gaza War, on 18 January 2009, both the Danish and the Dutch ministers of foreign affairs contributed to control the border between Egypt and Gaza.[30]