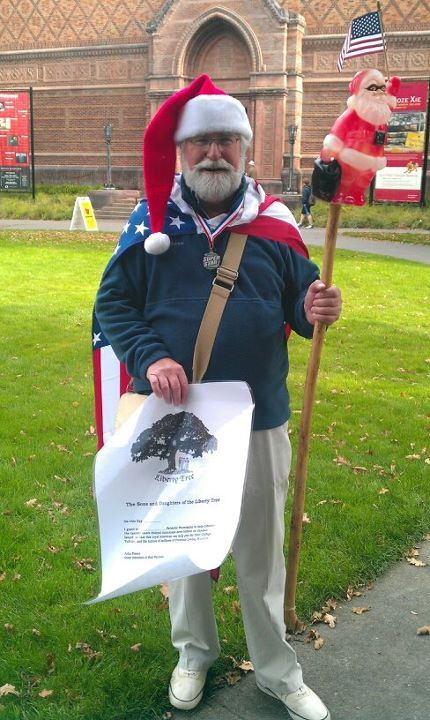 Here is my prophetic post made on June of 2011, three years before my encounter with Belle Burch and her witches. I title myself ‘The Jubilee Prophet’.  I went into the Whoville camp before they became Whoville, to spread my message. Jesus tried to restore the Jubilee. I was so committed to this idea, I did not need followers. I lived in Springfield before the coming of the Ugly Satan Witches. I am carrying my totem….

The Democratic presidential candidate’s legislation — dubbed “The College for All Act” — will release all 45 million Americans from their student debt and be paid for with a new tax on Wall Street transactions.

The proposal goes further than fellow Democratic candidate Elizabeth Warren’s plan, which caps student debt forgiveness at $50,000 and offers no relief to borrowers who earn more than $250,000.

Roots Of The Liberty Tree

Yesterday I returned to the oak tree on the University of Oregon Campus where I posted my proclamation on November 15, 2010, wherein I suggest tax shelters for bank accounts in Switzerland and the Cayman Island be brought BACK TO AMERICA and be used to create a Student Bank that would give interest free loans to students. This was the planting of a grassroots movement that had countered the Tea Party Movement – as planned!

While visiting the place where my homeless friend, Hatoon, slept – in front of the UofO library, and Arab student asked if he could be in a photo with me. The Arab Spring, and the Liberty Tree Rebellion – meet!

I am standing in front of the museum where the day before Occupy Eugene made a camp. From here they moved to the Mill Race. I went there to say hello friends.

I then walked up and down 13th. Street, stopping to talk to students about my idea that our President has been putting forth.

It only takes one good man to change things, turn back the tide of ruin and despair!

Last November I made up a poster, hung it on a tree on the University of Oregon grounds outside the library, rang a bell, and shouted;

“Who wants some Liberty? I got your Liberty right here!”

I posted on this event on my blog that is no more. I sent news of my one man demonstration to the President of the Stuudent Union on November 16, 2010. I call for a Student Bank made up of monies retrieved from offshore bank accounts. It would be an honor bank system, where tax evaders who have a change of heart could put their money they hid from the Fed in a Student National Bank – and invest in America’s future! For doing this, they will be redeemed in the Spirit of the Jubilee Jesus, who I have prepared the way for.

The Occupy Eugene Community has moved to the University of Oregon, and set up camp a hundred yards from my Liberty Tree. I had to do something that day. I wanted to start a New Revolution. It only takes one good man – and the others will follow!

Here is what my brochre and contract with America, said;

“The Sons and Daughters of The Liberty Tree

I grant to______________________________Patriotic Permission to help Liberate the taxable assets disloyal Americvans have hidden on the Cayman Islands, so that Loyal Americans can help pay for their college tuition, and the tuition of millions of freedom Loving Students.

This guest post is by Paul Combe, president and CEO of American Student Assistance.
The “Occupy” movement is drawing attention to some very real problems that plague our nation’s higher education financing system: skyrocketing college costs, an increased reliance on student loans over grants, the role of private loans, people repaying their student loans until their own kids head off to college, “draconian” collection methods, and so on.
The solution receiving the most buzz is an idea to forgive all student loan debt.  More than 600,000 Americans have signed a petition asking the federal government to forgive student loan debt as a “trickle-up” approach to stimulating the economy.

EUGENE, Ore. – Occupy Eugenepacked up and moved their camp to the heart of the University of Oregon campus, where officials said a campground is incompatible with the mission of the university.

“The UO supports the right to freespeech and encourages the active exchange of ideas,” Lorraine Davis, the acting provost, wrote in a message to university staffobtained by KVAL News. “Those concepts are at the foundation of higher education. But the time, place and manner for expression of ideas must be consistent with the university’s mission, and the UO cannot accommodate a campground.”

Members of Occupy Eugenetold KVAL News that this is another temporary move.

The City Council exempted the protest from a ban on camping in public parks until mid-December.

But after six nights in the park, protesters said they felt they were out of the public eye.

Protesters said occupying the memorial quad between the library, business school and art museum will allow the group to protest issues like the rising cost of tuition and the privatization of public education.

“Not only will we get incredible amounts of exposure from being at the campus because there’s thousands of people down there everyday, but we would also like to build more solidarity with the students,” said Elizabeth Yandel, an Occupy Eugene organizer.

“This is a place where people have expressed their Constitutional rights for many, many decades in this country,” said another Occupy organizer, Jamil Jonna. “It has a long pedigree, so I think it’s very rational and reasonable just from a historical perspective.”

While the universtiy said it does not allow camping on campus, officials said they are working with Occupy Eugene and the City of Eugene to help the group find a better location.

“Hurrah! Hurrah! we bring the jubilee!”

The Rosamonds were members of three guilds; the Rebleutenzunft, the Gerbenzunft,
and the Swan Brethren. There might be a fourth if the Rosamond genealogist is
correct in saying the cross on the Rosenmund shield is a weaver’s needle, an
emblem worn by weavers who went on Crusade. If this can be proven, then these
Crusader Weavers would be a case where a class of worker-merchants answered the
call of the Pope, and perhaps contributed funds from their ranks in order to pay
for their passage to the Holy Land, as well as for their armour and weapons, in
order to Liberate that land that Abolitionist God of the Jews gave to the people
he Liberated from Egypt. It was this God who maketh the laws for the Jubilee
that the Billy Boys appear to be aware of as they marched through Georgia.

The Swan Brethren were a Church-based Trader-Merchants Guild where only Swan
Brothers could participate. They were given rings with a seal like the one above
with the dancing wolf. The letter between the great Erasmus, and his friend,
Gottschalk Rosemondt, has this seal.

There is no doubt Jesus came to do away with the Slave system that bound very
poor and powerless people in chains, and declared they were eternally in debt to
the person who took away their freedom. This indebtedness was a financial
commodity upon which an entire ecnomy was based. Slaves were often worth more
then the land they worked.

Anti-Godites, like Denne Sweeney, accuse President Obama of trying to make
Southerners slaves in a socialist system in regards to healthcare. To get this
healthcare one must be in debt to those who provide it, be it the private
sector, or the Government. In return, one gets Good Health, which is vital in
making a living. Slaves got free healthcare, as did the Slavemasters horses and
livestock. In exchange, they were further obligated and bound to work for free.

Denne Sweeny and his gang of Racists, warn Scalawags to go hide as his Deluded
Army advances. The Scalawags and Carpetbaggers were Radical Republicans and a
poor class of hardworking people who found sanctuary in the Ozarks and
Appalacian mountains. Being followers of William of Orange of Holland, and his
Glorious Revolution that freed Protestants from Papal tryanny, they KNEW slavery
was wrong! And being astute students of the Bible, I am sure they discovered
what I discovered, that Jesus was all about the Jubilee and the Emancipation of
slaves.

It is hight time to bring the Jubilee Jesus from the very back of the Grand
Republican Parade, to the very front, but, behold, he is already there. He is