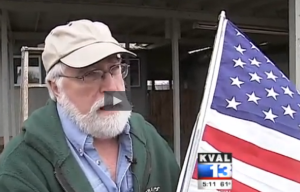 Here is another Vet funeral. Dale Quick had no surviving family.

Dale Wayne Quick passed away at the age of 91 on Thursday, June 13th. Quick had lost contact with his family, who lived in his native Kansas, years ago. After his wife, Caroline, passed away in 1987 at the age of 42, Quick never remarried. He spent the last 17 years of his life at Lancaster Rehabilitation Center and had no known surviving family members.

Despite all of that, hundreds of people showed up at Roper & Sons South Lincoln Chapel on Monday morning in support of Quick, a veteran of the Korean War. Among those in attendance were Governor Pete Ricketts and United States Senator Ben Sasse.

“I mean, this is just a picture of what Nebraska is,” Sasse said. “I was telling my eight year old boy, here’s a guy who fought in the Korean War to fight for my kids and all other Nebraskans’ kids and grandkids’ freedom. Everybody in Nebraska has this feeling that this guy shouldn’t be laid to rest without a whole bunch of people here to salute him, his memory and his service.”

The service picked up some national attention as well when Jake Tapper, a journalist at CNN, found out that the funeral home was looking for people to attend Quick’s funeral. He tweeted out to his two million followers to notify them when and where the service was going to take place.

I was surprised that Teresa and Hollis were good friends. Teresa was our manager at McKenzie Meadows, and now works at the corporate offices of Umbrella Properties. I had Hollis over for a Sunday Dinner, and the Duck Games. Teresa beamed at me, knowing someone else cared about Mr. H. Many hearts were broken when I found him dead. I put together a memorial after I adopted him, and paid for his funeral. We found two half-sisters a month later. I put his ashes alongside the McKenzie River.

Hollis is rolling over in his grave at hearing the vicious slander of Kim Hafner, who tells my neighbors I am mentally deranged and the worst neighbor anyone could have. To contact my daughter and share vicious gossip, and make up lies about my life at the McKenzie, is a outrageous invasion of my privacy.