White Men And Their Great Families 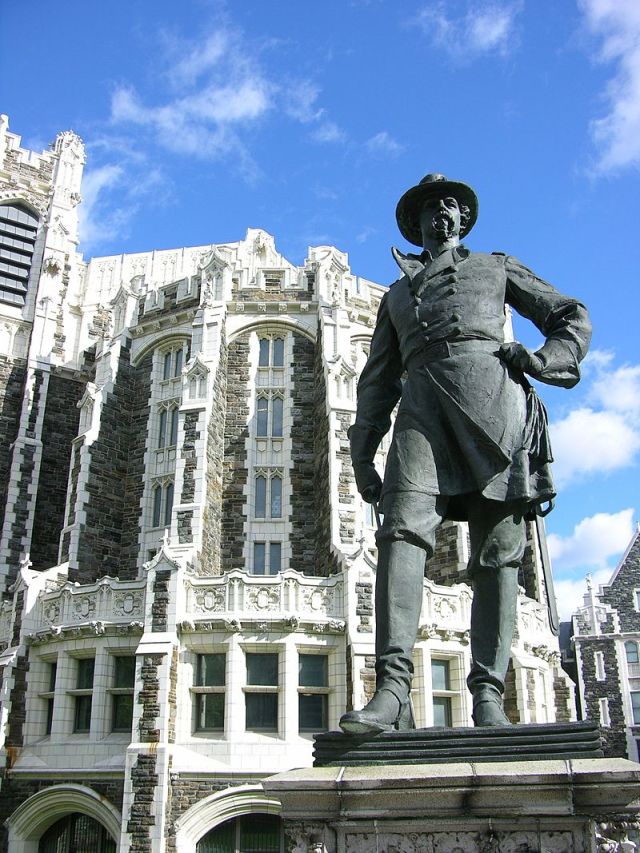 Above is a statue of my kin, Alexander Webb. I just founded a Society for renaming buildings after him.

An investigation needs to take place to see if a White Man was ever considered to replace another White Man, in the renaming of buildings located on our Colleges. If not, this constitutes abject Racism, and Iconoclasm! Two years ago I took steps to remove Joseph Lane from being honored in my County.

Senator Thomas Hart Benton was not a king, but a politician that was elected to serve five terms in the State of Missouri that sent thousands of Scot-Irish Immigrants to the Oregon Territory to secure it from rule by the King of England. If the democratic voters of Missouri did not like what Benton was selling, then they would have voted him out of office. Therefore, as a elected official, Benton is above being punished by a college President who rules like a Lord of the British Empire – his paying subjects!

Benton was the sole Proprietor of the Oregon Territory. The Benton Family was very close with the John Jacob Astor family who founded Astoria and held the monopoly of the fur trade – that hired Hawaiians due to a manpower shortage. Here is much of Benton’s commercial for Manifest Destiny. He was Astor’s attorney!  Follow ‘The Money Trail’. Ed and his historians fault these Capitalist Adventurers, for not forsaking their investors, and squat in the dirt with the Native Americans like Hippies and Beatniks. How many billionaires gift money to OSU? Do the Koch Brothers chit-chat with Ed on the phone?

Non-white Citizens of Oregon are in the minority. But, it is the cunning psychology of  Guilt Meisters like Joseph Orosco, who seize power from the people of Oregon – without a ballot! To what end? How many people of color want the Guilt Meister to speak for them, and set the course of their lives? Is Ed Ray preparing to run for office? Ed Ray has not received one vote from any Oregon Citizen, yet he dictates to said Citizens. Ed said he was going to poll the citizens of Benton County to see what name they prefer. To employ hired historians to conduct this survey, is against voting Laws, because OSU gets $440 million dollars in State and Federal Funding.

I suspect many voters do not vote, believing Anarchists and Black Lives Matter are representing them in the changes they would like to see. Young people are vulnerable to the Guilt Trip Meisters who disempower White People. We need Voters, not bullshitters! Put it to a vote! What do the majority of U.S. Citizens think about the Renaming? Our taxes pay for these colleges. How many want to see the original names restored – because they do not want to empower a bunch of nameless Nobodies?

I sent this in e-mail to Congressman Peter DeFazio. I just sent this whole post to my elected Representative!

“I suspect the renaming of buildings of universities poses a threat, in that Russian Trolls will work this divisive issue in our coming election. There is evidence these re-namers are in touch with each other, and exchange tactics. I believe they are producing swing voters – to the right! Did Putin launch this movement? I have renamed Benton Hall, jessie Benton Hall in order to keep the controversy from doing more damage to my family history. My famous sister married a Benton.”

Alexander Webb is in my family tree. He was the Regent of the City College of New York. He won the Congressional Medal Honor for his Gallantry at the battle of Gettysburg. Webb helped put an end to the Treason of Robert E. Lee, who is also in my family tree. I suggest Alexander’s name and image replace all tributes to Lee. This suggestion, coming from a White Man who is kin to these men, is more acceptable, because there is no hidden racist agenda. CCNY was a progressive school. Joseph Webb helped found Yale. Alexander is related to William Shakespeare.

Alexander risked his life knowing he was fighting to set free Black slaves. His amazing courage proves there was no hidden and selfish motive for white men to fight for the liberty of all black human beings. This is a lie that some people of color have invented in order to demean, and divorce white people from their outstanding historic achievements. In the 2016 election, Putin and his Soldiers manning computers, adopted the divisive tactics that people like Joseph Orosco employed to divide our society, rather than unite. That the President of OSU, Ed Ray, took part in this Iconoclasm – with the help of his panel of OSU Historians, is a outrage that weakened our Nation. This  resulted in the election of a Racist President, who sided with racists, and nominated a neo-Confederate to be the Attorney General.

On this day June 1, 2019, I found the Alexander Webb Collegiate History Society that will consist of a panel of white men and women, who will do extensive research, and ferret out racists and white supremist! The AWCHS will vote on new names for buildings.

The reason people of color will not be admitted to this society, is the contention one reads over and over again that White People are in denial, and own a innate racism, that does not allow them to police, and correct – past mistakes, transgressions, and trespasses. This resistance is welcomed by racist propagandists in order to draw more people to their cause and anarchist revolution. Surely every sane and honest person of color, will wish this society well.

I will post on more Patriotic White Families who made America Great, and for generations served in the Armed Forces to protect all our Liberties!

My kindred, William Wilson, and his brother-in-law, Erasmus Webb may have known William Shakespeare – intimately! Anne (Webb) Wilson lived at Windsor Castle. Her brother, Erasmus, was the Archdeacon of Buckingham Palace. Are we looking at the authors of Shakespeare’s plays? Why has this family lineage been buried, and all but forgotten? These are extremely educated men, whose wives would be at court. They would know all the intrigues, and, hear confessions. They would know the merry wives of Windsor. People would bring them all the gossip that is the bane of the church, aimed at bringing other down as they vie for royal favors.

This bloodline flows from Bohemia and has seeded several major religions. This is the ‘Hidden Seed’. The Webb family came to America. In the chart below we see that Sir Alexander Webb married Mary Wilson, the daughter of Thomas Wilson MP, the grandfather (or Great Uncle?) of Reverend John Wilson of the Massachusetts Bay Colony, that the Webb family played a large role in. Shakespeare’s line, died out, and thus, this is his American Seed.

Statesman, Thomas Wilson MP, was a stellar scholar and author who could have prepared the way for the writing of Shakespeare. Why not put Alexander Webb is the race? Surely the Webb-Wilson family saw themselves as the family-power behind the Church and Throne, and in need of new forum.

“Wilson belongs to the second rank of Elizabethan statesmen. An able linguist, he had numerous acquaintances among Spanish and Flemish officials in the Netherlands, and, in a wider context, his range of friends included Leicester, Burghley, Hatton, Davison, Sir Francis Knollys, Paulet, Walsingham, William of Orange, Jewel, Parker, Parkhurst, Gresham, Ludovico Guiccardini and Arias Montano.”

1 Response to White Men And Their Great Families