Is Cain A Evangelical Prophet For President?

What a holy mess?

As President Trump moves ahead with his plan to nominate Herman Cain, a 2012 Republican presidential candidate, for a seat on the Federal Reserve’s board of governors, Republican lawmakers are being forced to confront a fresh round of uncomfortable allegations of sexual misconduct against women as the 2020 campaign begins.

A day after Mr. Trump made the choice of Mr. Cain official, Senate Republicans expressed quiet anxiety over the prospect of another #MeToo minefield even as the White House exalted the decision.

“President Trump’s statement that Herman Cain is ‘a truly outstanding individual’ is a message that the president of the United States is willing to ignore the allegations of a number of women who alleged that Herman Cain either sexually harassed them or had an affair with them,” said Gloria Allred, a lawyer who represented two of Mr. Cain’s accusers. “This message is an insult to women and should be condemned by the Republican Party and all those who care about respect and dignity for women.” 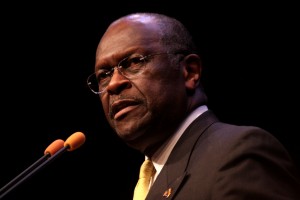 At this point, there doesn’t seem to be much about Mitt Romney’s Mormon background that hasn’t been exhaustively picked over by the media. The same is true to a lesser extent of Rick Perry and Michele Bachmann; the two former Republican front-runners sparked controversy late in the summer for their alleged links to Dominionism, an extreme Christian theological movement.  Bachmann was profiled in The New York Times and The New Yorker, while Perry continues to be embroiled in the commotion over evangelical pastor Robert Jeffress’ claims that Mormonism is not a Christian faith.

But with Herman Cain now making a legitimate claim for “front runner” status, what can we say about his religious beliefs and their impact on his political views?  Given that a majority of Americans say they want a candidate with strong religious beliefs it would seem like an obvious question, but Cain seems to be the only one interested in discussing his Christian faith.  Last week, he announced that he would challenge Perry for white evangelical primary voters, touting his own Christian conservative roots.

Antioch Baptist Church North is, according to John Blake, a former member, significantly more liberal than Cain.  The church’s senior minister, the Rev. C.M. Alexander, says that he doesn’t talk politics with Cain.  And Cain’s conservative philosophy – that “if you don’t have a job and you’re not rich, blame yourself” – does not exactly fall into line with the pastor’s views on social justice.  Alexander doesn’t, according to a colleague, “talk about pulling yourself up by your bootstraps.”  Rather, he emphasizes “providing bootstraps.”

According to their friends, Rev. Alexander respects Cain despite their differences on fundamental political issues.  And others who have seen Cain in action at Antioch say that he is comfortable and confident when talking about his faith, despite the fact that it hasn’t played much of a role in his campaign of late.  This raises two important questions: Will Cain be successful in his attempt to compete with Rick Perry for evangelical Christian primary voters?  And will black Protestants be as willing as his pastor to separate Cain’s faith from his political philosophy?