Not to be confused with Fürstenberg (Westphalian family). 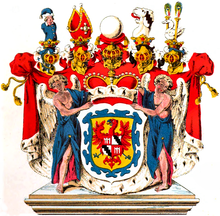 Arms of the Princes of Fürstenberg

Fürstenberg is the name of a Swabian noble house in Germany, based primarily in what is today southern Baden-Württemberg near the source of the Danube river.

Numerous members of the family have risen to prominence over the centuries as soldiers, churchmen, diplomats, and academics. Sometimes the name is gallicized as de Furstenberg or anglicized as Furstenberg.

Fürstenberg was a county of the Holy Roman Empire in Swabia, present-day southern Baden-Württemberg, Germany. The county emerged when count Egino IV of Urach by marriage inherited large parts of the Duchy of Zähringen upon the death of Duke Berthold V in 1218, and was originally called the county of Freiburg. Egino’s grandson Count Henry started naming himself after his residence at Fürstenberg Castle around 1250.

The county was partitioned in 1284 between itself and the lower county of Dillingen, and then again in 1408 between Fürstenberg-Fürstenberg and Fürstenberg-Wolfach. Over the centuries, the various counts and Princes expanded their territories to include the Landgraviate of Baar, the Lordships of Gundelfingen, Hausen, Heiligenberg, Höwen, and Meßkirch, and the Landgraviate of Stühlingen in Germany; as well as estates around Křivoklát Castle (German: Pürglitz), Bohemia, Tavíkovice Castle (German: Taikowitz) in Moravia, and from 1733 Lány Palace in Bohemia.

In 1607, Count Frederick IV of Fürstenberg-Heiligenberg acquired the fief of Weitra in Lower Austria by marriage. The House of Fürstenberg held Weitra until the Revolutions of 1848. The members of the Fürstenberg-Weitra cadet branch built a Renaissance castle on medieval foundations.

The principality of Fürstenberg, composed of the counties of Baar, Stühlingen and Heiligenberg, c. 1800

The princely family is still today residing at Donaueschingen, Heiligenberg and Weitra.

The first Fürst zu Fürstenberg of the Fürstenberg-Stühlingen branch, which was mainly residing in Bohemia, Joseph Wilhelm Ernst, was born 12 January 1699. He was the second son of Prosper Ferdinand, Count of Fürstenberg-Stühlingen, killed at the Landau on 21 November 1704 during the War of the Spanish Succession, and his wife Sophia, Countess of Königsegg-Rothenfels (1674–1727). On 2 February 1716, Joseph Wilhelm Ernst was raised to princely status, after the princely Heiligenberg branch had become extinct. He married in 1723 countess Maria Anna of Waldstein and Wartenberg (22 February 1707–12 November 1756). After her death in 1756, he married in 1761 to Maria Anna countess von der Wahl (born 22 September 1736 – 21 March 1808). He died in Vienna, 29 April 1762.[1]

There was no issue from his second marriage. From his first marriage, he had eight children:

They had seven children:

The death in infancy of the eldest son of the second prince placed Joseph Maria Benedikt Karl in the line of direct inheritance as the second son of Joseph Wenzel Johann Nepomuk. He married in Hechingen 1778 to the Princess Maria Antonia von Hohenzollern-Hechingen (10 November 1760  – 25 July 1797). He died at Donaueschingen on 24 June 1796 without issue. The title passed to the next eldest sons of the second prince. Both of those boys, Karl Alexander and Karl Egon Marie had died in infancy and childhood, respectively (1761 and 1771).[2]

Karl Joachim Aloys Franz de Paula, became the fourth Fürst zu Fürstenberg, He married in 1796 the Landgravina Karoline Sophie zu Fürstenberg (20 August 1777,  – 25 February 1846). Their shared ancestor was Prosper Ferdinand, Count Fürstenberg, who had been killed at Landau in 1704. Karl Joachim Aloys died in 1803 without issue. There were no more surviving males of the first prince’s eldest son. The title passed to the line of the second son.[2]

On 25 March 1799, Karl Aloys was killed at the Battle of Stockach. His nephew died in December 1799. Consequently, when his cousin, Karl Joachim Aloys Franz de Paula, died, his own son, Karl Egon, became the fifth Prince (Fürst).

Heads of the House after Mediatization[edit]

Notable members of the House of Fürstenberg[edit]