On this day, March 26, 2019, I plant the Seed of the Teutonic Order in America, in order to come to the aid of Seniors and Children who suffer from the hatred of the Doomsday followers of the Evangelical Rapture Heresy, who have been brainwashed by false ministers to hate Obamacare, because it was installed by a Black President.

There is a Grand Master of the Teutonic Knights in my family tree, who is kin to the founder of the Moravian church. Three of my grandfathers were German Turners and Forty-Eighters who fought Confederate Traitors in order to free slaves.

My Teutonic Order is secular in nature. I would like it to be composed of White German Males, exclusively, in order to give white males back their identity that was taken away by neo-Confederate Evangelicals Losers, but, this is not legal.  This order is open to women, and all races.

Purely religious since 1929, the Teutonic Order still confers limited honorary knighthoods.[3] The Bailiwick of Utrecht of the Teutonic Order, a Protestant chivalric order, is descended from the same medieval military order and also continues to award knighthoods and perform charitable work.[4]

The full name of the Order in German is Orden der Brüder vom Deutschen Haus St. Mariens in Jerusalem or in Latin Ordo domus Sanctæ Mariæ Theutonicorum Hierosolymitanorum (engl. “Order of the House of St. Mary of the Germans in Jerusalem”). Thus, the term ‘Teutonic’ refers to the German origins of the order in Latin.[5] It is commonly known in German as the Deutscher Orden (official short name, literally “German Order”), historically also as Deutscher Ritterorden (“German Order of Knights”), Deutschherrenorden, Deutschritterorden (“Order of the German Knights”), Marienritter (“Knights of Mary“), Die Herren im weißen Mantel (“The lords in white capes”), etc.

The Teutonic Knights have been known as Zakon Krzyżacki in Polish (“Order of the Cross”) and as Kryžiuočių Ordinas in Lithuanian, Vācu Ordenis in Latvian, Saksa Ordu or, simply, Ordu (“The Order”) in Estonian, as well as various names in other languages. Knighthood was associated to feudalism and service. The knight was always required to help the sick and wounded after a battle and was regarded to be brave, honest and determined.[6] 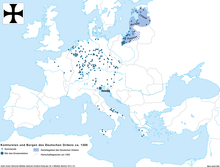 Extent of the Teutonic Order in 1300.

Formed in the year 1192[7] in Acre, in the Levant, the medieval Order played an important role in Outremer (the general name for the Crusader states), controlling the port tolls of Acre. After Christian forces were defeated in the Middle East, the Order moved to Transylvania in 1211 to help defend the South-Eastern borders of the Kingdom of Hungary against the Cumans. The Knights were expelled by force of arms by King Andrew II of Hungary in 1225, after attempting to place themselves under papal instead of the original Hungarian sovereignty and thus to become independent.[8]

In 1230, following the Golden Bull of Rimini, Grand Master Hermann von Salza and Duke Konrad I of Masovia launched the Prussian Crusade, a joint invasion of Prussia intended to Christianize the Baltic Old Prussians. The Knights had quickly taken steps against their Polish hosts and with the Holy Roman Emperor‘s support, had changed the status of Chełmno Land (also Ziemia Chelminska or Kulmerland), where they were invited by the Polish prince, into their own property. Starting from there, the Order created the independent Monastic State of the Teutonic Knights, adding continuously the conquered Prussians’ territory, and subsequently conquered Livonia. Over time, the kings of Poland denounced the Order for expropriating their lands, specifically Chełmno Land and later the Polish lands of Pomerelia (also Pomorze Gdańskie or Pomerania), Kujawy, and Dobrzyń Land.

The Order theoretically lost its main purpose in Europe with the Christianization of Lithuania. However, it initiated numerous campaigns against its Christian neighbours, the Kingdom of Poland, the Grand Duchy of Lithuania, and the Novgorod Republic (after assimilating the Livonian Order). The Teutonic Knights had a strong economic base which enabled them to hire mercenaries from throughout Europe to augment their feudal levies, and they also became a naval power in the Baltic Sea. In 1410, a Polish-Lithuanian army decisively defeated the Order and broke its military power at the Battle of Grunwald (Tannenberg). However, the capital of the Teutonic Knights was successfully defended in the following Siege of Marienburg and the Order was saved from collapse.

In 1515, Holy Roman Emperor Maximilian I made a marriage alliance with Sigismund I of Poland-Lithuania. Thereafter, the empire did not support the Order against Poland. In 1525, Grand Master Albert of Brandenburg resigned and converted to Lutheranism, becoming Duke of Prussia as a vassal of Poland. Soon after, the Order lost Livonia and its holdings in the Protestant areas of Germany.[9] The Order did keep its considerable holdings in Catholic areas of Germany until 1809, when Napoleon Bonaparte ordered its dissolution and the Order lost its last secular holdings.

However, the Order continued to exist as a charitable and ceremonial body. It was outlawed by Adolf Hitler in 1938,[10] but re-established in 1945.[11] Today it operates primarily with charitable aims in Central Europe.

The Knights wore white surcoats with a black cross. A cross pattée was sometimes used as their coat of arms; this image was later used for military decoration and insignia by the Kingdom of Prussia and Germany as the Iron Cross and Pour le Mérite. The motto of the Order was:[year needed][dubious – discuss] “Helfen, Wehren, Heilen” (“Help, Defend, Heal”).[12]