The Bohemian Labyrinth of the World and Heart

I just discovered this. I have come home to my people! It is providence that the name Rosamond ‘Rose of the World’ be attached to the Bohemian Tree of Knowledge and Life.. Click on a place in this city, and get some wisdom……….

This was the vision I had for the land the California Barrel Company sat upon. This vision, came to be!

John Amos Comenius (Czech: Jan Amos Komenský; German: Johann Amos Comenius; Latinized: Ioannes Amos Comenius; 28 March 1592, Moravian Slovakia – 15 November 1670, Amsterdam)[1] was a Czech philosopher, pedagogue and theologian from the Margraviate of Moravia[2][3] who is considered the father of modern education.[4][5] He served as the last bishop of the Unity of the Brethren before becoming a religious refugee and one of the earliest champions of universal education, a concept eventually set forth in his book Didactica Magna. As an educator and theologian, he led schools and advised governments across Protestant Europe through the middle of the seventeenth century.

Comenius introduced a number of educational concepts and innovations including pictorial textbooks written in native languages instead of Latin, teaching based in gradual development from simple to more comprehensive concepts, lifelong learning with a focus on logical thinking over dull memorization, equal opportunity for impoverished children, education for women, and universal and practical instruction. Besides his native Bohemian Crown, he lived and worked in other regions of the Holy Roman Empire, and other countries: Sweden, the Polish-Lithuanian Commonwealth, Transylvania, England, the Netherlands and Hungary.

Labyrinth of the World and Paradise of the Heart 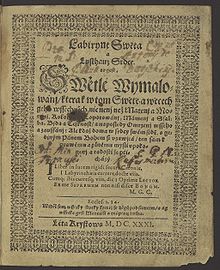 Titlepage of the first edition of the Labyrinth of the World and Paradise of the Heart, 1631

Labyrinth of the World and Paradise of the Heart is a book by John Amos Comenius. The book is a satirical allegory. Considered a jewel of Baroque literature,[1] it is one of the author’s most important works. Comenius finished the first version in 1623, but he rewrote the book several times, changing its concept and form. The book remains the most widely read work of older Czech literature.[1]

The world is portrayed as a city which resembles a labyrinth, entered by a pilgrim (the narrator and author himself). The city has The Gate of Entering, and The Gate of Separation; six main streets which represent the six classes of the world; The Castle of Fortune in its middle; and The Common Square.

In Part One of the book, Labyrinth of the World (Chapters 1–36), the pilgrim is joined by two guides, Searchall Ubiquitous (allegory of human curiosity and longing for knowledge), and Delusion (allegory of indolent adopting of conventional and shallow thoughts). He seeks a job for himself that would best suit both his body and soul. The guides, however, prevent the pilgrim from seeing reality by making him watch the world through glasses. He captures glimpses of the reality only seldom. That is why he cannot find the right choice; even in the Castle of Wisdom he sees Vanity.

He sees human life as meaningless, and is terrified by death; yet he finds salvation in Part Two of the book, Paradise of the Heart (Chapters 37–54), where he returns to his heart, being called there by God. There he is visited by Christ who tells him what the real meaning of the world is, so the pilgrim, now transformed, can join the Invisible Church and see it through new glasses which are the word of God and the Holy Spirit. He finally beholds the Glory of God and is received among God’s own. For this, he thanks with a prayer and a hymn that celebrates the Glory, Beauty and Love of God.

The book is written in an artistic language. It is a poetical vision, and Comenius doesn’t just criticize society; he also tries to capture the progress of Man in general (and show the dualism of material and spiritual ways of life). He points at the vanity of human endeavour that focuses on the material world and tells the reader that one must follow the will of God, as it is revealed in the Bible.

As mentioned above, the book remains very popular and is still in print (so far the last two editions in the Czech Republic appeared in 2001, which was sold out very soon,[2] and 2005. The new Moravian Library building which was opened in Brno on 2 April 2001 has a stone relief of the Labyrinth on its front wall.[3][4]

The Labyrinth of the World and the Paradise of the Heart was written by John Amos Comenius (1592–1670) in 1623 with several revisions over his lifetime. It is still the most widely read book from medieval Czech literature. As an allegory it is often compared to John Bunyan’s The Pilgrim’s Progress, which was written fifty years later. It is quickly apparent that Comenius was greatly influenced by the book of Ecclesiastes. The first section chronicles the life of a pilgrim seeking his life’s vocation while seeing only vanity, futility, meaninglessness, and death in the world around him. It is a social commentary on the matrix of organized religion. In the second section, the pilgrim finds true meaning and paradise in his heart through salvation and devotion to Jesus Christ. In this manner it has been compared to the Confessions of St. Augustine.

Comenius began his writing shortly after the defeat of the Czech Protestants by the Roman Catholic army at the Battle of White Mountain (1620). The first draft was completed in 1623. By then Comenius was in exile leading his people as the last Bishop of the Bohemian Brethren (Unitra Fratrum) and Moravian churches, during the forced re-Catholicization of the Czech, Bohemian, and Moravian peoples during the Counter Reformation.

John Amos Comenius is the Latinized version of the Czech name Jan Komensky (“the man from Komna”). He was a true Renaissance scholar, who is widely regarded as the father of modern education through his book Didactica Magna. He developed the first illustrated children’s book, Orbis Pictus (“The World in Pictures”). He was also considered radical for advocating the education of women and peasants. Forced to flee his Protestant home land, he lived in seven different countries, and he wrote over two hundred books, including a seven volume scientific encyclopedia, before dying in Holland.

Comenius understood that true happiness is not found in this world. Comenius’s parents and four sisters died in 1604, he was then raised by an aunt. He did not enter a school room until he was sixteen years of age. His first and second wives and several of his children would die from plagues during the Thirty Years Wars.

The writing of Comenius inspired the Czech people over the decades of Nazi and Communist rule. It provided a refuge from a dark and soulless world, providing hope. His work has been compared to the paintings of Hieronymus Bosch for its fantasy, symbolic imagery, and abstract representations. Comenius’s peasants, like those who appear in the paintings of Pieter Bruegel, understand the difficulties of living in a world that seeks to destroy rather than to praise.

Comenius’s legacy lives on in the UNESCO award bearing his name that honors outstanding education achievements. The Czech Republic honors his birthday, March 28, as a national day of recognition for teachers. Recently the University of Jan Amos Komensky was founded in Prague, specializing in educational training programs for teachers at the undergraduate and graduate level.

The Labyrinth of the World and the Paradise of the Heart is a much needed resource for living in today’s postmodern world filled with strife and discord. In an age of darkness and malevolence, Comenius provides in his labyrinth a ray of hope—the light that comes down and illuminates the city and its people.

Dr. Terrill is Director of the Counseling Program and Professor of Counseling at Houston Graduate School of Theology.

1 Response to The Bohemian Labyrinth of the World and Heart