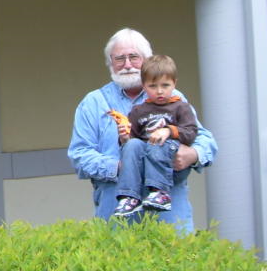 My grandson, Tyler Hunt, is the direct Heir of the history of Alice Stuttmeister, and William Broderick a.k.a Beema and Beepa. This is a historic document due to the city being Fruit Vale, that was later incorporated into Oakland.

There is no Marriage Certificate for Ryan Hunt and Heather Hanson, or Ryan’s father and mother, or, Patrice Hanson and myself. William in Tyler’s great, great, great grandfather.  He married Alice Lillie Stuttmeister who is fourth from the left, next to William Broderick seated on the ground in the top photo. William Stuttmeister is on the left in bottom pic. 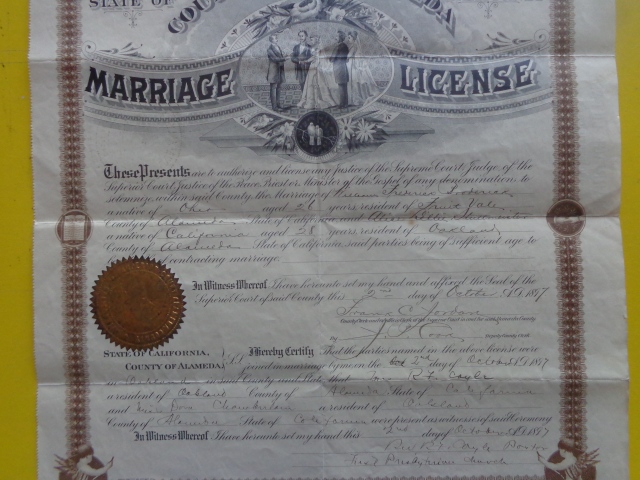 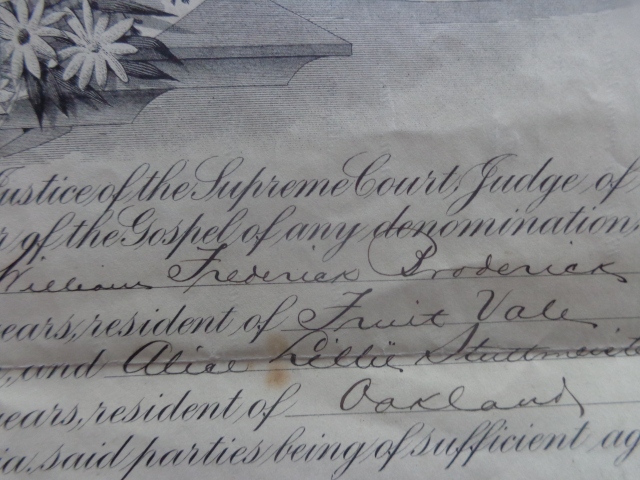 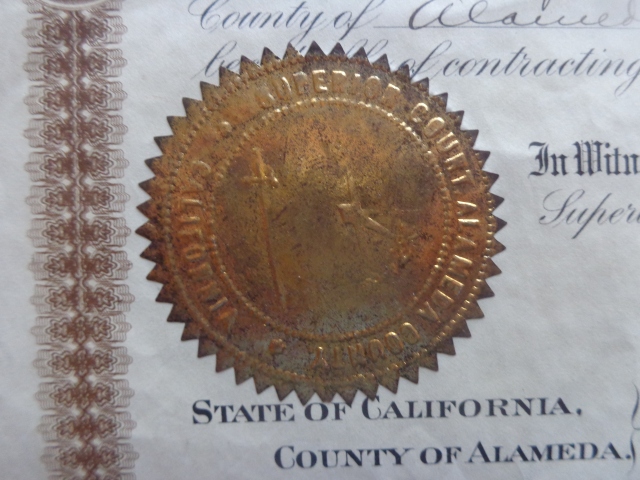 One of the most enjoyable weddings of the past week took place at
Belmont, Wednesday morning last, the contracting parties being Miss
Augusta Janke, daughter of Mr. and Mrs. August Janke of Belmont,
and Dr. Wm. Stuttmeister of San Francisco. The house was
handsomely decorated with a rich profusion of ferns and flowers, and
at the appointed hour was filled with the relatives and intimate friends
of the contracting parties. At 11 o’clock the wedding march was played
and the bridal party entered the parlor. The bride was attended by Miss
Alice Stuttmeister, a sister of the groom, and Miss Minnie Janke, a
sister of the bride, as bridesmaids, and Dr. Muldownado and Wm.
Janke, a cousin of the bride, were groomsmen. The Rev. A. L. Brewer
of San Mateo performed the beautiful and impressive ceremony under
an arch composed of flowers and greens very prettily arranged, after
which the guests pressed forward and offered their congratulations.
The bride was attired in a very pretty and becoming costume of the
crushed strawberry shade, and wore a corsage bouquet of orange
blossoms. She carried a handsome bouquet of white flowers. After the
guests had paid their compliments the bride and groom led the way to
the dining-room, where the wedding dinner was served and the health
of the newly married pair was pledged. The feast over, the guests
joined in the dance, and the hours sped right merrily, interspersed with
music singing and recitations, until the bride and groom took their
departure amid a shower of rice and good wishes. Many beautiful
presents were received. Dr. and Mrs. Stuttmeister left Thursday
morning for Santa Cruz and Monterey, where they will spend the
honeymoon. On their return they will make their home in Belmont.