An hour ago I responded to a message from someone I went to school with. I looked at the list of famous alumni and found – Fay! I am so set free! Fay Lanphier was a Beauty Contest Winner of renown. She was Rose Bowl Queen, Miss California and America. She starred in the movie ‘The American Venus’. Consider Belle. My autobiography is titled ‘Capturing Beauty’. Consider the trouble the Miss America Pageant is in, and our President’s involvement in Miss Universe Contests. There was controversy with Fey in her role. This is a huge find! This is a huge story! Fay (fairy) was elected ‘The Venus of Today’.

I am going to have Beauty Contests at the core of my Bond book. There is an obsession with mating beautiful women with James Bond, a SPY. Is there an ancient society of beautiful women watchers. Consider Bathsheba and Helen of Troy. Look at the movie poster and behold Neptune SPYING on Bathing Beauties. Is Bond a secret member of The Neptune Club? Consider the Quinotaur!

I am the only author that puts an obese woman in the role of a detective in Kimbo and Wade. Kimbo was a beauty contestant until she sexually molested at a pageant.

Reports were received that King Neptune, portrayed by actor Ernest Torrence, somehow fell into the ocean and had to be pulled out (“rescued”) by lifeguards. Also on hand for the final night of pageant activities was Triton, son of Neptune, played by Douglas Fairbanks, Jr.[4]

Ruth Malcomson the winner from the previous year decided not to defend her title due to her belief that professionals were entering the Inter-City competition as a Hollywood film was to be shot around the 1925 pageant. Her decision drew controversy in the press, and began false speculation that the pageant wasn’t on the up and up. The pageant committee quickly instituted a new rule that no Miss America could return to competition.[5]

Contestants of the 1925 Miss America Pagean

She was the 1925 Rose Queen.[3] To date, she is the only person to hold both titles at the same time. She is also the first Miss California to become Miss America.[4] Before she was Miss California, she was Miss Santa Cruz (1924). She graduated from Oakland High School in 1924.

Lanphier appeared in the Paramount Pictures film The American Venus (1926) which featured a beauty contest, and co-starred Louise Brooks,[5] and performed for a short time on stage in San Francisco with the Henry Duffy Players.[6]

She was born in El Dorado, California, the eldest child of Percival Caspar Lanphier and Emily Elenora Olson, with five other siblings coming after her.[7]

She was briefly married to Sidney M. Spiegel (son of Joseph Spiegel, founder of the company which bears his name).[8][9] In 1931, she married her high-school sweetheart Winfield Daniels,[10] by whom she had daughters. She lived in Oakland California suburb Orinda until her death from viral pneumonia at age 53.[11]

PAPILLION, Neb. — Miss USA Sarah Rose Summers, had a bit of a triumphant return on Friday.

Nebraska’s first ever Miss USA returned to the high school where she graduated to share her journey with the students.

A pep band serenaded Summers as she walked through the doors of Papillion La Vista South, something she hasn’t done since she graduated in 2013.

Summers reminisced about the good times, but said that things weren’t always easy.

“I didn’t love high school. It was pretty hard for me at times, but now I’m the first ever Miss Nebraska as Miss USA and it’s a dream to be able to come back and speak to the students in the seats that I once sat in,” Summers said.

She told students how she was a victim of bullying and ate lunch alone in the halls.

Summers said she didn’t let these acts define her or keep her from her goals, something that resonated with some students. 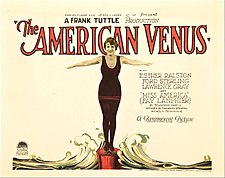 The American Venus is a 1926 American silent comedy film directed by Frank Tuttle, and starring Esther Ralston, Ford Sterling, Lawrence Gray, Fay Lanphier, Louise Brooks, and Douglas Fairbanks Jr. The film was based on an original story by Townsend Martin. The scenario was written by Frederick Stowers with intertitles by Robert Benchley.[1]

The film is believed to be lost, although pieces of the film’s trailer survive and can be viewed on YouTube.[2] In April 2018, three seconds of footage from the film was discovered by the British Film Institute.[3]

Before shooting began, the film became the subject of a minor controversy when the New York Graphic, a newspaper known for its use of yellow journalism, claimed that the film’s distributor, Paramount Pictures, had “fixed” the Miss America pageant. In a series of articles, the paper claimed that the eventual winner, Fay Lanphier (Miss California), had been chosen before the pageant because she signed on to star in the film before the pageant was held. Paramount publicly admitted it had been involved with the pageant’s promotions and had agreed to pay for pageant’s reviewing stand. The studio also agreed to sponsor an “American Venus” contest to be held before the Miss America pageant to determine which of the contestants had the best “photographic possibilities”. Lanphier won the American Venus title and was chosen by Famous Players-Lasky then production manager Walter Wanger a role in the film.[4] The New York Graphic was later forced to retract their claim that the contest had been fixed.[5]

Fay Lanphier was the first Miss America winner to star in a feature film. While the film was a popular draw upon its release and played in theatres for two years after its initial release (mainly due to the heavy publicity and the inclusion of two sequences that were shot in two-strip Technicolor), The American Venus received mixed reviews and Lanphier’s contract was dropped.[6][7] The American Venus proved to be more helpful to the careers of star Esther Ralston and Louise Brooks who was cast in a supporting role

Summers’ biggest message to students was to be kind to one another.

“My biggest message to anyone that isn’t being kind of is being hurt by hurtful words and not kind words is it gets better and it’s a choice to either be hateful or to be kind, and it’s a happier choice. It’s a more life-giving choice to be kind to others,” she said.

Summers will compete for Miss Universe in Dec.

Summers began her pageantry career at age ten, after she convinced her parents to allow her to compete in pageants when they received a postcard advertisement for a local child beauty pageant.[8][9] In 2012, Summers was crowned Miss Nebraska Teen USA 2012. She went on to represent Nebraska at Miss Teen USA 2012 at Atlantis Paradise Island in Nassau, Bahamas, but was unplaced.[10] At the end of her reign, she crowned Jasmine Fuelberth as her successor.[11] After a hiatus, Summers returned to pageantry and competed in Miss Nebraska USA 2016, where she placed as the second runner-up.