Why isn’t Giuliani and Jeff sessions demanding Putin hand over the twelve Russian Army offers who issued warrants. Instead Mr. 911 threatens Americans with a revolt from armed Nazi-like Militias for the Killer Jesus. Giuliani is a TERRORIST.

At the same time, his Mafia-like Boss Man directs attention away from himself and his real legal problems, to South Africa, in order to stir up his Christian Nazi base, and offer them fresh targets to go into their deluded and murderous minds.

Here are members of the church I belong to too. I declared myself a Nazarite in 1987 after I was driven from a Christian church for asking good questions. These are South Africans. I have been mocked and abandoned by friends and family because I chose this church. Today, they are in the news.

John and Jesus were Nazarites. They launched a war against Rome and burned down the debt archives. When the Mob is out of power I offer my services as arbitrator and ambassador.

On Monday, Aug. 20, news broke that Melania Trump would be taking her first big solo trip as first lady to Africa. But controversial comments about South Africa from her husband on Twitter Wednesday night could affect Melania Trump’s visit to Africa.

The White House has declined to rule out accepting a Russian proposal to question on US soil American people – including the former ambassador to Moscow Michael McFaul – sought by the Kremlin for “illegal activities”.

The proposal arose at Monday’s summit between the US president Donald Trump and the Russian president Vladimir Putin, and any decision by Washington to assist with an adversary’s prosecution of former government employees overseas would be a stunning shift in US policy, especially as it could violate the international legal principle of diplomatic immunity. 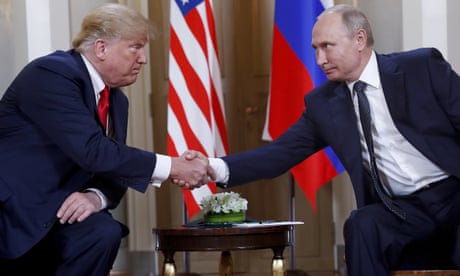 ‘Nothing short of treason’: US voters on the Trump-Putin summit

“The president is going to meet with his team and we’ll let you know when we have an announcement on that,” White House spokeswoman Sarah Sanders told a news briefing. Sanders added that Trump “said it was an interesting idea … He wants to work with his team and determine if there is any validity that would be helpful to the process”.

Sanders’s comments prompted outrage in the US, including from McFaul, a vocal Putin critic.

“When Trump says Russia is no longer targeting America, that’s not how this American feels,” McFaul wrote on Twitter.

“Putin is most certainly targeting and intimidating me. And I’m an American.”

Or, so the president of the United States appears to believe. Amid an avalanche of damaging headlines (and serious legal challenges), Donald Trump announced Wednesday night that he had asked Secretary of State Mike Pompeo to “closely study the South Africa land and farm seizures and expropriations and the large scale killing of farmers.”

By all accounts, the president’s statement was not prompted by any intelligence briefing, or appeal from international human rights organizations, but rather, by a segment on Tucker Carlson’s Fox News show. Which makes sense: Although empirical evidence shows there is no “large-scale killing” of white farmers in South Africa, white nationalists have been promoting that idea for years — and Tucker Carlson has been promoting white nationalist ideas for most of the Trump presidency.

Here’s a quick explanation of what is actually happening in South Africa, and how our president came to echo neo-Nazi lies about what is happening there.

It is true that the South African government is trying to expropriate some white farmers’ land.

Under apartheid, black South Africans were barred from owning virtually all of their country’s agricultural land. Thus, by the time South Africa became a democracy in 1994, whites accounted for 10 percent of its population, but owned roughly 90 percent of its land. The question of how to redress this immense inequality in the distribution of South Africa’s natural wealth has loomed over the country ever since. Only marginal progress has been made on this front in the past 24 years: Today, the 8 percent of South Africans who have light skin own 73 percent of all agricultural land, according to the farmers association Agri SA.

In 2016, the South African parliament passed a law empowering the government to force white land owners to forfeit their real estate — in exchange for market-price compensation — and to then redistribute said land to black South Africans. But the law did more to raise the expectations of the nation’s racial majority than it did to meet them. With redistribution proceeding at snail’s pace, a growing number of black South Africans began warming to the far-left, Economic Freedom Fighters party, and its proposal for nationalizing all of the country’s land. In response, the incumbent party, the African National Congress (ANC), amended the Constitution to allow the government to expropriate white landowners’ property without compensation.

Although the moral case for reparations in South Africa is bulletproof, one hardly needs to be a white nationalist to question the wisdom of executing such reparations through forced land redistribution (rather than through taxes and cash payments, more generous social welfare programs, etc.). After all, South Africa’s economy is heavily reliant on foreign capital. And if mass, uncompensated expropriation scares investors, South Africans of all skin tones could end up worse off. As Vox’s Jennifer Williams explains:

That move is being welcomed by many in the country, but not everyone is convinced it’s a good idea. Some, including investors, worry that it could trigger a catastrophic economic crisis like the one that occurred in neighboring Zimbabwe when it enacted similar reforms in 2000. There, rapid land seizures panicked investors, causing them to flee the market in droves. That led to massive hyperinflation and food shortages that effectively collapsed the country’s economy: Experts put the cost to Zimbabwe’s economy at around $20 billion.

It is not true that there has been “large-scale killing” of white farmers.

There is a lot of violent crime in South Africa. And sometimes, the victims of such crime are light-skinned farmers. In some cases, white farmers have been killed in such brutal fashion by dark-skinned assailants that it is reasonable to suspect that resentments rooted in the nation’s historic caste system played some part in the attacks.

But there is no “large -scale killing” farmers in South Africa, let alone of white farmers. The number of attacks and murders on South African farms has actually been sharply declining since the turn of this century. In the late 1990s, about 150 South African farmers were murdered each year; now, that number is below 50. Meanwhile, murder rates in white rural areas remain far lower than those in predominantly black townships — a pattern that is not perfectly consistent with the narrative that black South Africans have begun expropriating white land through mass murder. These facts haven’t stopped white nationalists the world over from raising awareness about “white genocide” in South Africa.

White nationalists in the West love the idea that their “people” are facing imminent threat of oppression and/or genocide. This fantasy serves to justify white supremacy, by positing white dominance as the only alternative to white subjugation. Unfortunately for such Nazi lovers, white people remain both the majority population —- and the economically, socially, and politically dominant racial caste — in both the European Union and the United States. This unfortunate state of affairs leaves alt-right snowflakes struggling to pretend that satirical tweets, racially inclusive Cheerios commercials, and the musings of radical academics are literally white America’s Kristallnacht.

Given all this, it isn’t hard to understand why white nationalists the world-over would latch onto the cause of revanchist Afrikaners: Here’s a place where the white population is genuinely vulnerable to discrimination by a government dominated by nonwhites; where masses of black citizens are mobilizing to reclaim white families’ land; and where those families are sometimes murdered. It’s Richard Spencer’s nightmare come true! And the Jew media doesn’t want you to know about it!

AfriForum, a far-right Afrikaner lobbying group, has exploited the white nationalist community’s hunger for vicarious victimization. For years, the organization has been trying to alert the world to the (nonexistent) campaign of race-based killings that threatens their people’s survival. And neo-Nazis’s enthusiasm for their narrative has helped AfriForum gain a massive digital following.

It’s worth stipulating that Afrikaners — like any ethnic minority population in a democracy — have some real basis for fearing their collective vulnerability to the whims of the majority. And the fact that said majority recently won a right to expropriate white land — and is losing patience with their government’s attempt to honor that right while balancing the interests of white landowners — is a reasonable cause for some Afrikaners to worry about the prospect of mass, race-based violence.

But at present, no such violence — or indications of the imminent onset of such violence — exists. And white South Africans continue to command a wildly disproportionate share of their nation’s wealth, a privilege they owe to several generations of race-based brutality.

And, of course, no concern for diplomacy or accuracy will stop our president from echoing any watered-down, white supremacist narrative he hears on Fox News; if it did, he probably wouldn’t be president in the first place.

Trump’s tweet was an unusual way for the president to mention the word “Africa” for the first time since taking office, as The Washington Post points out. But South African leaders failed to see any flattery in the name check.

Hours later, the country’s official government Twitter account hit back hard on the president’s medium of choice. “South Africa totally rejects this narrow perception which only seeks to divide our nation and reminds us of our colonial past,” the account tweeted.

Even as this diplomatic dust-up flared — with a South African presidential spokesperson later calling the tweet “unfortunate and misinformed” — onlookers unacquainted with South African domestic policy may find themselves wrestling with a reasonable question: “Um, what?”

Well, we’ve got some answers about what’s going on here.

Why land reform is a big deal in South Africa

The roots of the controversy reach back well into South Africa’s colonial past, when a small white minority held power. One crucial way the white government preserved that power was the 1913 Natives Land Act, a law that banned Africans — the vast majority of the population — from acquiring agricultural land beyond a few reserves comprising roughly a tenth of the land.

The effects of this and other laws can be felt still today, long after South Africa became a majority-black government in 1994. Black South Africans, who make up about 80 percent of the population, own just 4 percent of the country’s farms and agricultural holdings, according to government data published earlier this year.

Since the collapse of apartheid, the brutal system of segregation that reigned in South Africa for half a century, redistribution of land has been a key — if elusive — pillar of policy for the ruling party, the African National Congress.

The laws established under colonial rule and apartheid were “about destroying the humanity and the personhood of black South Africans,” political analyst Sithembile Mbete told journalist Peter Granitz. “So when people say they want land, part of it is also about wanting ancestral belonging and dignity.”

1 Response to The Zulu Nazarites