“I am looking at a picture.” 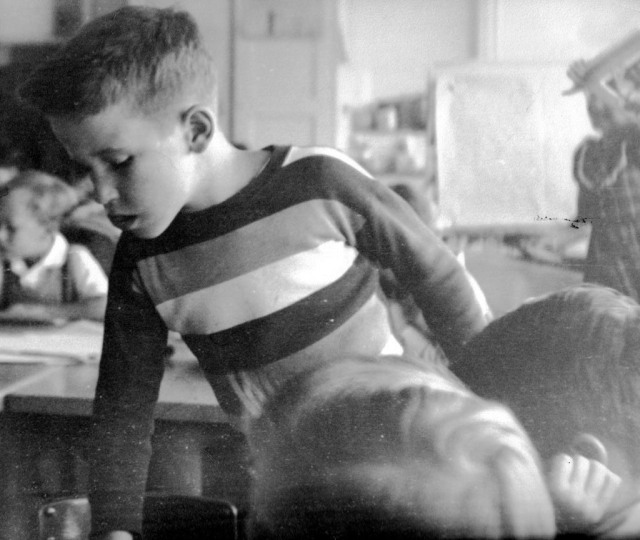 This photograph of me was glued to a piece of lined school paper like the one you get in kindergarten. I believe a teacher at Williams chose it because I am engrossed in a picture. My tongue is sticking out. Am I looking at a picture I drew, or, am I still drawing?

My teacher wanted me to take it home and show my mother. How about my father? I was thinking about putting the next photo, with the innocent one of me. But, changed my mind. I wanted the officials in Concord to own a nice picture of our family history – for their archives. I changed my mind again, after posting the one of Christine.

What is going on here? This is like a scene from a dramatic movie. That’s my mother, Rosemary, on the right. My father, Vic, on the left, and his mother, Melba, in the center. Who took this picture? Melba is looking at this person, and she looks angry.

Oh! Did I leave out someone? That’s my younger sister, Vicki. She looks happy – even innocent! Why? Looks like Melba is playing favorites again, and gave little Vicki a new doll. Is Vic playing favorites – too? I think Melba is saying;

“What’s wrong with this bitch? Isn’t she going to allow my son to bond with any of his four children?”

What is Vic holding on to – in his other hand? Where’s Christine? 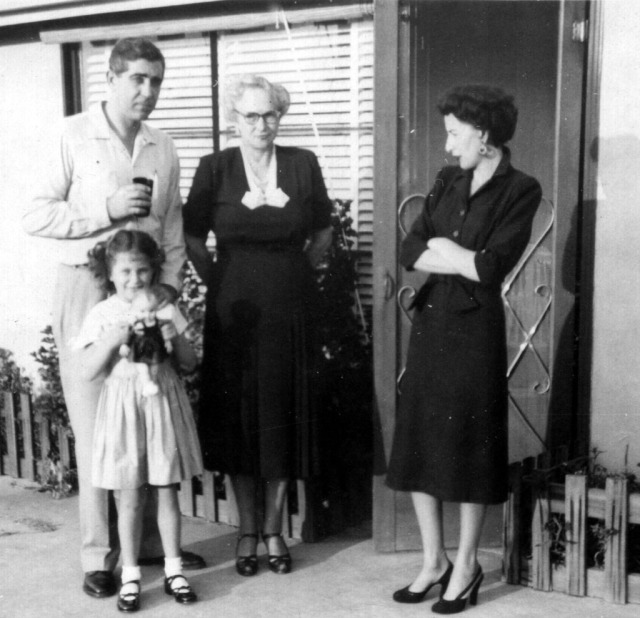 How I Became The First Family Artist

When it rains in Concord – it really rains! I think the clouds that roll in from the Pacific, hit Mount Diablo – and dump! My friend lived two doors down from us on Richards Avenue. He invited me in to play with his finger-paint set. 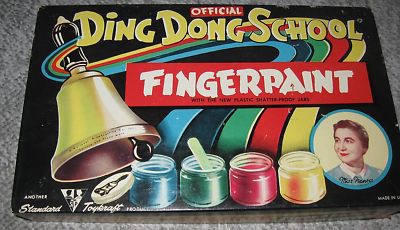 He gave me this piece of shiny paper, and showed me how to dip my fingers in and paint something. I am doing a clown. I really got into it. It was a good drawing. My friend kept looking over at my work, then, at his, and – he frowned!

“Let’s play with something else. Give me your paper so I can wash it off.”

“You can wash it off and reuse it.”

“I want to keep it, and show my mother!”

“You can’t do that!” the little brat spat! And I got to my feet, grabbed my work of art, and ran home. I think I was crying. I told Rosemary my ex-friend wants to destroy my work of art. Just then, the doorbell rings.

“Hi! I’m Tommy’s mother and my son is very upset. Your son stole his piece of paper and he wants it back.”

“He’s not getting it back. My son wants to save his artwork. And, I want him to have it. ”

“I will pay you for the paper!”

“What is the point?”

The mother stomps home in a huff. The point is, I was a vastly superior artist than her bratty son – who could not buy the gift I now owned – with a million dollars!

Does this sum up the ongoing argument I have long endured? Julie Lynch is a liar when it comes to the testimony of Christine and my teacher at Williams. The first biographer was a hired ghost writer, who claimed Vic took Christine out to the family car, and sexually molested her. He published a family photo next to this allegation – that is true! Vic confessed he did this at the end of his life. He quit drinking, and was going to get married. He wanted a clean slate. Christine had died three months earlier.

It is common for a father who has molested one of his children, to reject that child, and bond with a child he has not molested. The rule is……The Mother always knows!

Now to the really hard and painful part for me. What mirror did my beautiful sister own, that she could look into, and feel esteemed, feel safe, feel like the damage could be healed? Could she hold her mother up? Her father? How about Melba? My brother Mark, is there for no one. Not then! Not ever! Who’s left? What role model did Christine have, not to become a famous artist, but, just a human being?

When Christine started bonding with boys, she had problems. They could not figure our family, out. They saw Christine and I were very close. They were confused. They were threatened. One of Christine’s boyfriends became my good friend. He wondered if incest was going on, we were so close. There was no incest between us. However, my dear sister was having a very difficult time finding anyone who was my equal, who could replace me. I was the most important person in her life, until the day she died. She sees me, in herself. When I look into her eyes, I see the best of me. This is the way it was. It was not supposed to be like this. No family should be like our family, was. We did our best. Together, we created something, from nothing!

Rosemary started to become violent and vicious with Christine, as is sometime the case of a mother who blames the child for the incest perpetrated by the husband she lost. She was sixteen and I was seventeen when she begged me to rent a place with her so she could get away from the constant attacks. I had a job. We got a newspaper. The very first place we looked at, as faux husband and wife, my sisters says;

“Oh! We grew up with a fireplace just like this one!”

The poor woman was already wondering. Now, she looked like she was going to cry.”

When family photos were taken, Christine and I always got as close to one another as we could. Below is a photograph of the Pretend Mr. and Mrs. Presco….The Family Artists. 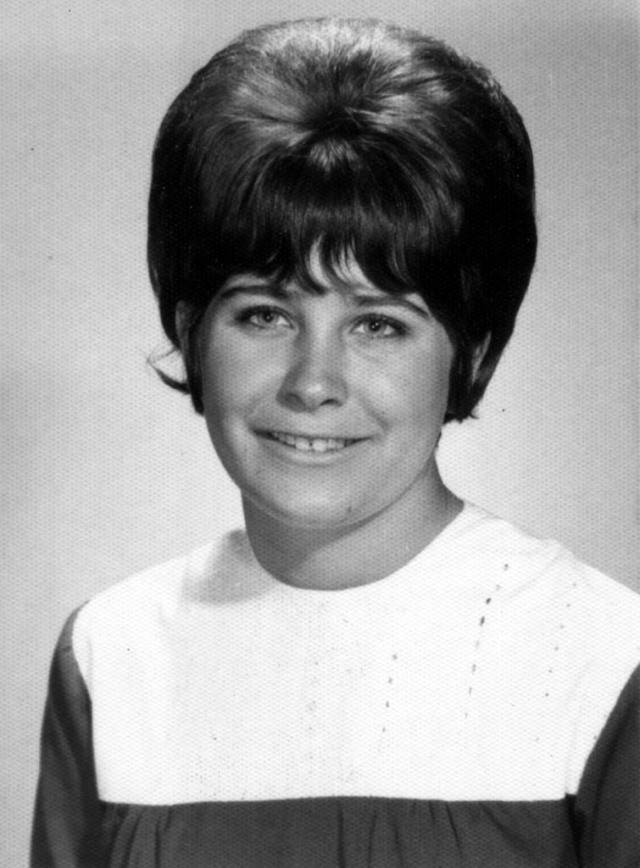 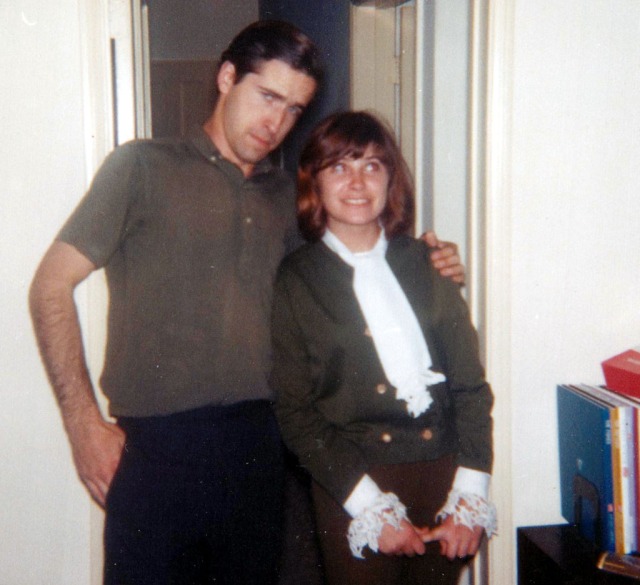 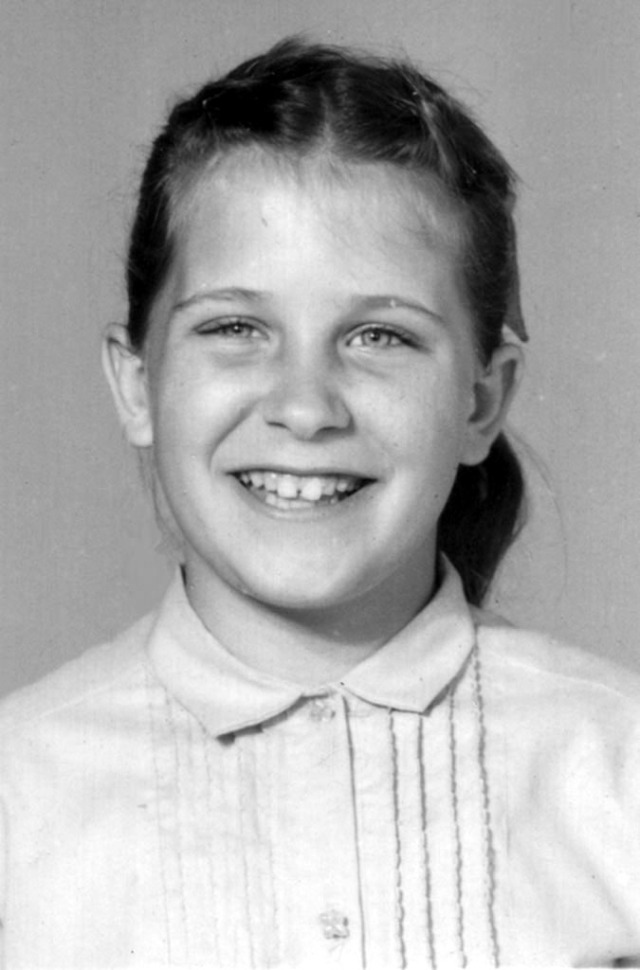 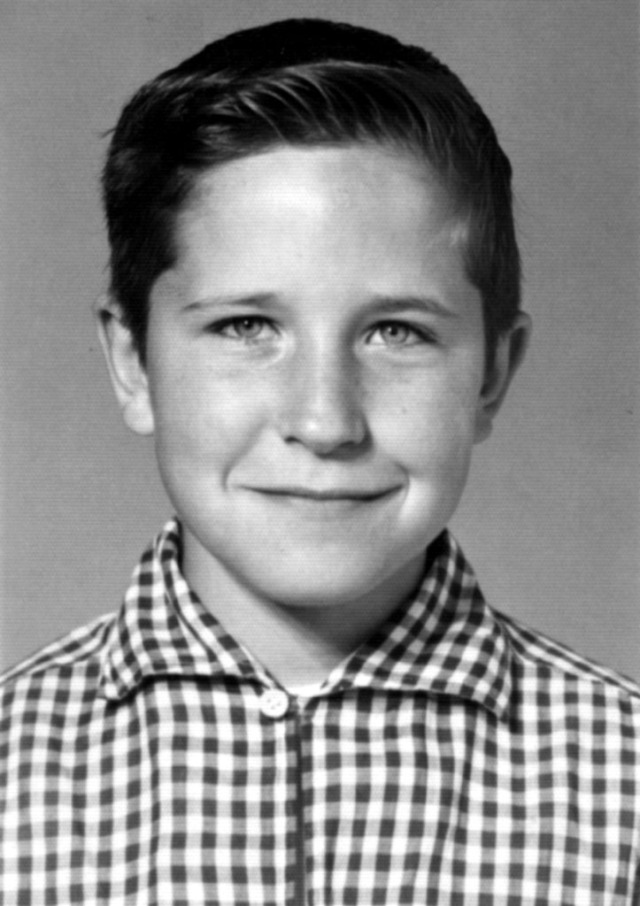 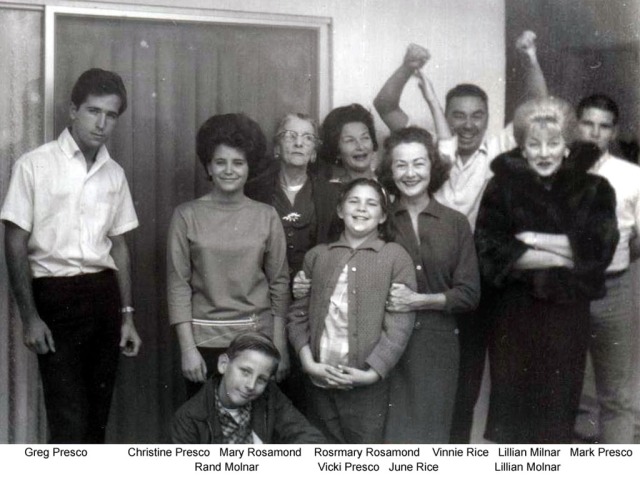 Gifted Children In My Family

Stacey Pierrot who came to own my late sister’s art gallery in Carmel, employed another ghost writer to transfer the gifts my family were born with, over to her. She titles herself ‘Caretaker’ of our artistic and literary legacy. In an essay by Julie Lynch, she claims Christine’s talent was suppressed at a very early age, because our mother only wanted me to become a world famous artist. Talk about a picky King Maker! What power she had for a woman with only a high school education. Wrong again, Rosemary went to college.Lynch summons the grade teacher of school days past to give testimony at what a child genius Rosamond was. However, all my teachers were Christine’s teachers, as I was a year older, and thus they had to nearing ninety years old. How did Lynch find these relics? She didn’t! She lied!

Above are letters sent to my mother that are very supportive of my talent. Twice my painting was chosen to tour the world in a Red Cross show, where a hundred students all over America participated. If Christine did art work, my teachers, and the schools we attended, would have taken notice. Christine, however, did give me credit for her overnight success when she took up art in 1972.

In the photo above, Rosemary has posed her children before the painting I did when I was twelve of a sailboat that students all over the world viewed. According to Pierrot and Lynch Christine must have been fuming, she forced to render art while hiding in the closet with a flashlight – while her family slept! This is a classic usurpation that renders my family un-conscious, half-dead.

The painting of the mudflats of Emeryville was done when I was seventeen.(1964) The dimensions are around 50X72 inches. Months after I completed this work, I hitchhiked to New York and lived in Greenwich Village.