I believe the Kurds are kin to the people who fought Rome for the temple. This looting is a Biblical WARNING! 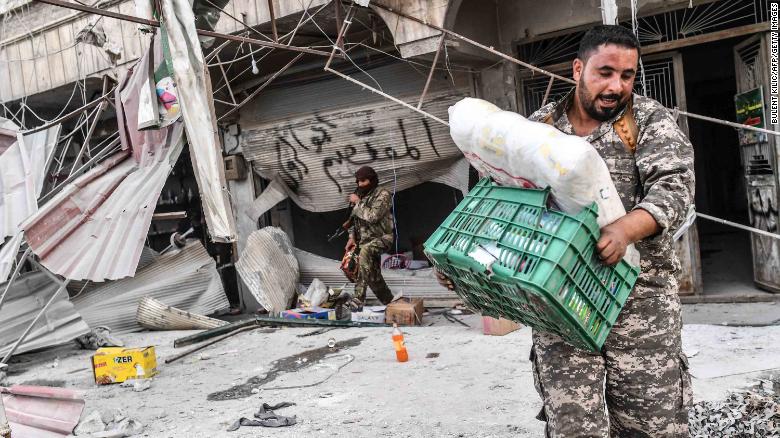 Fighters loot shops after seizing control of Afrin from Kurdish forces on Sunday.

(CNN)Syrian rebel fighters backed by Turkey went on a looting spree in Afrin on Sunday after seizing control of the Kurdish-held town following a two-month siege, observers said.

After forcing Kurdish fighters from their enclave in northwest Syria, the rebels pillaged private property, political and military sites, according to the UK-based Syrian Observatory for Human Rights (SOHR).
Some locals told SOHR that their houses were completely stripped of their contents. 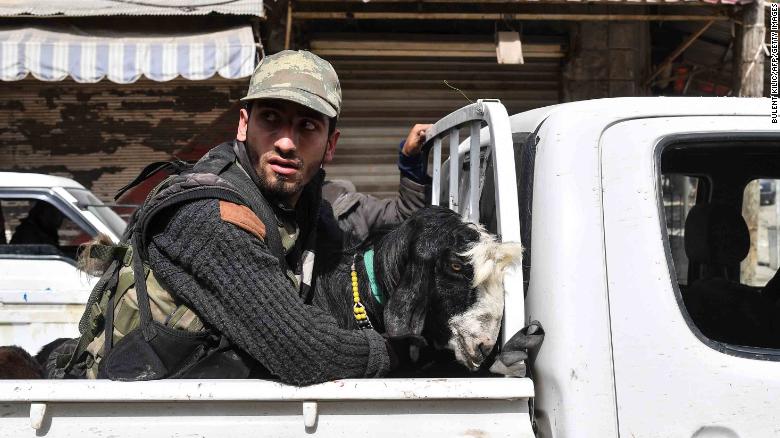 A fighter rides in the back of a pickup truck with looted livestock.
A Turkish photographer on assignment for Agence France-Presse, who captured the chaotic scenes, told CNN that the looting was widespread and organized, adding that he saw hundreds of opposition fighters more focused on pillaging than celebrating their victory.
“They are looting everything; goods, animals, goats, even pigeons,” Bulent Kilic said. “I’ve been in war zones for many years now. Two, three guys looting, it happens. I didn’t even take much notice at first. But then I saw that they were in such a hurry to take everything from this city.”
Ibrahim Kalin, a spokesman for Turkish President Recep Tayyip Erdogan, told CNN on Monday that Ankara was looking into the reports of looting, and suggested that some groups in Afrin might not be following orders from their commanders. 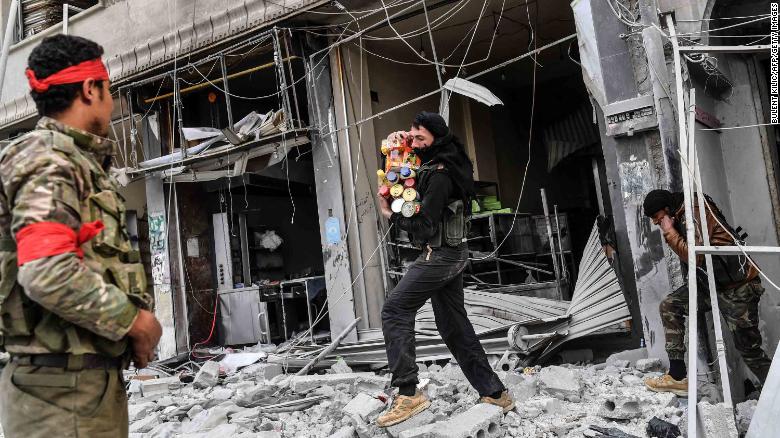 Rebels loot shops in Afrin.
Turkey, a NATO ally, launched an operation targeting Kurdish groups — some backed by the United States — in Afrin in January to clear the border area of militias it considers to be terrorist organizations.
More than 150,000 people have been displaced in the last few days from Afrin town, a senior Kurdish official and a monitoring group said over the weekend.
The UN said last week that it had received reports of opposition fighters looting the homes of some residents who fled Afrin.
A senior field commander for the Free Syrian Army, a rebel group involved in the battle for Afrin, blamed “some bad apples” within its forces but suggested the looting was not widespread. 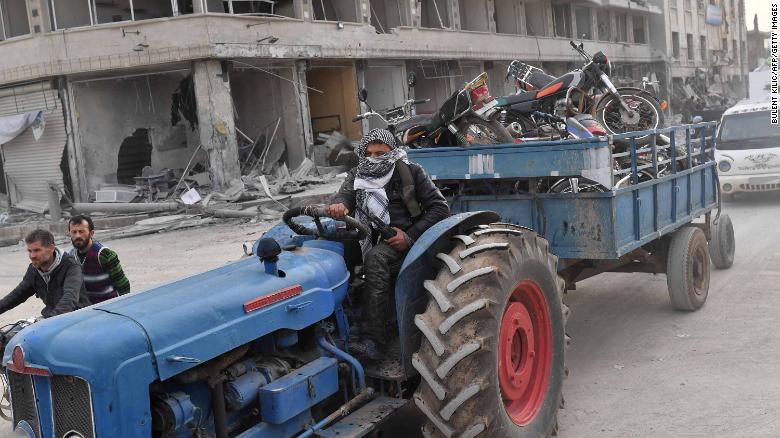 A fighter tows looted items in a trailer.
“There were some mistakes committed by some members of the FSA yesterday in Afrin, we don’t want these mistakes to happen again. The properties of the civilians should be left as they are,” the commander told CNN on Monday. “There are some bad apples, but the good ones surpass the bad ones by far.”
The commander’s characterization of “some bad apples” seemed at odds with what Kilic photographed: a masked man driving a tractor laden with motorbikes, rebels in uniform carrying stacks of soft drinks and crates of food, and a fighter clutching a goat in the bed of a truck.
On Sunday night a traffic jam snarled the road leading into Afrin, with cars entering the town empty and returning to nearby Azaz, where Kilic was staying, packed with goods.
Kilic said some battalions spray-painted their names on certain shops as a way of “reserving” them for future looting.
Afrin’s residents are enraged over the scale of the robbery, and many are trying to return to protect their homes and shops, Kilic said. 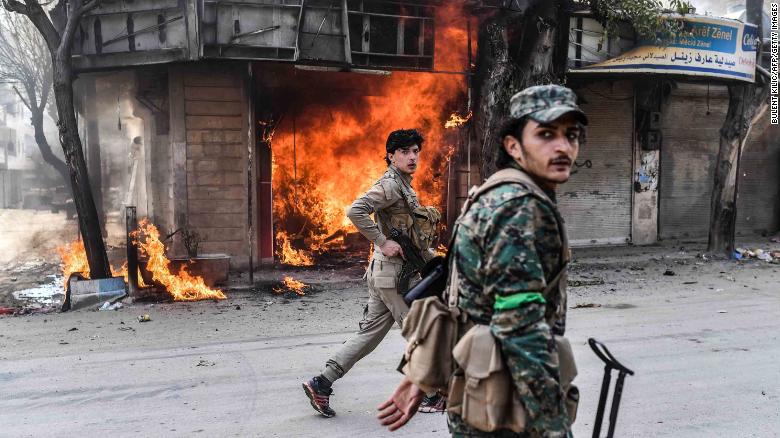 Rebel fighters walk past a burning shop in Afrin.

Erdogan: ‘Our target is not invasion’

Speaking in Ankara on Monday, Erdogan said the previous day’s events marked an important phase in Operation Olive Branch — the invasion of Afrin — and that forces would push eastward towards other Kurdish-held towns in northern Syria and across the border into Iraq.
“Our target is not invasion. Our target is to clear the terrorists,” Erdogan said.
But the senior FSA commander said that in light of the looting, pro-Turkish forces might not be so quick to advance.
“If we don’t improve the image we have in Afrin in the next 10 days or so, no one will dare say we want to go to Manbij,” the commander said.