Church of The Mega He-Man

“I don’t want to talk about pardons with Michael Flynn — yet,” Trump said. “We’ll see what happens. Let’s see.”

Frank Amedia believes Von Rumpmeister – the Grand Judge of Teen Ass – is an “instrument of God”. How many other Teavangelical Prophets, and Miracle Workers, believe the same thing? Tearumpmeister  spoke at the FBI National Academy graduation ceremony after trashing the FBI and threatening to pardon Flynn. Anyone who has studied the rise of Adolph Hitler – KNOWS POTUS has just crossed the line, and is a danger to the Free World. Historically ‘Instruments of God’ are exempt from obeying Manmade Laws because they are on a divine and manly mission.

Hundreds of Teavangelical Leaders are giving God’s Permission to Trump to do what he damn well pleases, as long as he keeps giving them signals HE IS LOYAL TO THEM! These un-holy traitors are a greater threat to the U.S. and Democracy – then Putin – who along with Trump are reviving the Manly Nazi Church. This church, and Frank Amedia, keep reinforcing THE LIES. If you doubt Frank and God’s angels help back a tsunami, then you are in league with Satan. Best keep quiet. Giving truthful testimony is essential to all Systems of Justice.

Frank Amedia, a former Christian policy liaison for the Trump campaign who believes the president is an instrument of God is sticking by his cherished leader in the wake of a violent white nationalist gathering in Virginia — and says Trump himself is acting as a prophet.

“Bad on both sides, wake up church,” Amedia wrote in a Facebook post to his followers, referring to Trump’s statement that there was bad on “many sides” in clashes between white nationalists and counter protestors in Charlottsevile, Virginia.

“Sometimes the president … says things that are prophetic and doesn’t realize he said it,” Amedia said in a recent prayer service.

What is the “bad on both sides” that Amedia is talking about?

A supernatural and evil spirit of “murder, hatred and division” that is seeking to take down the president. The only way to deal with it, Amedia went on, is prayer for Trump and the agenda of the Religious Right, which Amedia believes Trump is meant to carry forth.

Amedia, and a self-proclaimed “prayer warrior,” launched a project called POTUS Shield earlier this year made up of a group of self-styled “prophets” or “apostles” who vowed to create a protective shield of prayer and intention around Trump. They tour the country and mobilize communities sympathetic to their message. POTUS Shield’s leaders view politics as spiritual warfare and their stated goals include ending legal abortion, prohibiting same-sex marriage and getting rid of federal judges whose rulings are not to their liking. 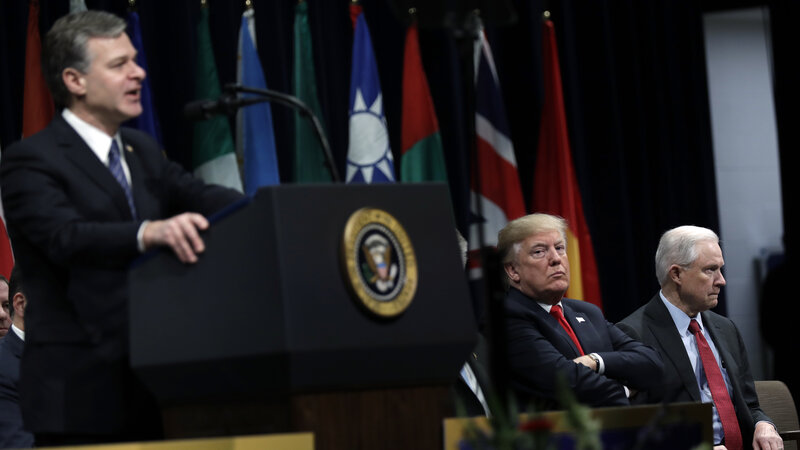 President Trump, minutes before heading to speak at the FBI’s National Academy, lashed out at the bureau, saying “it’s a shame what’s happened with the FBI” and claiming there are “a lot of very angry people that are seeing it.”

Speaking to reporters on the White House lawn, Trump said, “We’re going to rebuild the FBI” after what he described as “really, really disgraceful” documents. He appeared to be referring to text messages the Justice Department provided Congress this week in which a senior agent described candidate Trump as an “idiot” and made other political remarks in the course of the presidential campaign.

Trump’s comments are the latest in a barrage of criticism he has directed at the FBI. Earlier this month, he declared on Twitter that the bureau’s reputation is “in Tatters—worst in History!”

1 Response to Church of The Mega He-Man