The Dead Are Rising in Washington Square

While I was working on this, Christine called. I asked her about the steel thing they put under the arch. I googled it.

This burial vault full of skeletons was found while work was being done on water pipes under Washington Square Park. Department of Design and Construction

City workers made a stunning discovery this week when they stumbled upon a 19th century burial vault – which then led to the finding of a second tomb – containing skeletal remains beneath the edge of Washington Square Park.

Contractors for the Department of Design and Construction were attempting to dig up a 100-year-old water main near the park to replace them with brand new water main distribution lines when they unearthed the vault. 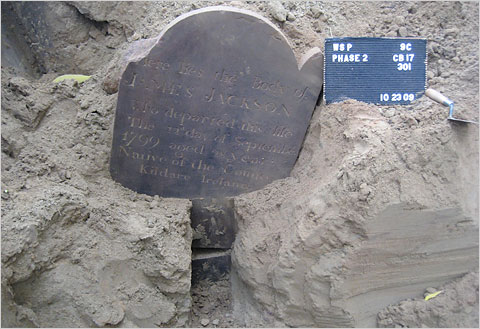 New York City Department of Parks and Recreation A three-foot-tall sandstone grave marker for James Jackson, who died on Sept. 22, 1799, was discovered during construction work in Washington Square Park.

The workers expected to find bones as they dug below Washington Square Park. After all, the remains of as many as 20,000 people are believed to be lying below. But as the backhoe scooped away earth last Friday, it instead revealed a 210-year-old gravestone, the writing still clear.

“Here lies the body of James Jackson,” the inscription declares, “who departed this life the 22nd day of September 1799 aged 28 years native of the county of Kildare Ireland.”

The three-foot-tall sandstone marker is believed to be the first found in the area, which served as a burial ground for the indigent — a potter’s field — long before the land was developed into a park known for its dramatic archway and its central place in Greenwich Village.

Several times during the restoration of the park workers have encountered loose bones and intact skeletons. Because most of the dead were buried in shrouds or in unmarked wooden coffins, the headstone was an unexpected find.

“It’s very unusual,” said Joan H. Geismar, the archaeological consultant for the parks department who made the discovery. “In fact, I’m stunned.”

The headstone, which is in pristine condition, was uncovered about two and a half feet below ground near the southwest corner of the park during preparation work for the next phase of redevelopment of the park. (Passers-by have stopped to peer into the hole and ask workers about the find, one of whom called in news of the discovery to the Washington Square Park blog.)

After the discovery, workers dug seven feet below the gravestone but found no body, which could have been moved when the area was covered over and developed into parade grounds.

Even in the absence of a body, the city is hoping to learn more about the young Irish immigrant who was apparently buried nearby, said the parks commissioner, Adrian Benepe. “They’re going to try to unravel the mystery of James Jackson and how the headstone came to be there,” he said.

The New-York Historical Society has identified one James Jackson, of 19 East George Street, who was listed in city death records on Sept. 23, 1799, Ms. Geismar said. In that record his occupation is listed as a watchman, though a city directory at the time listed him as a grocer. “There are many fewer Jacksons than I would have expected in the directory,” Ms. Geismar said. “Chances are this is him.”

It’s the sealing of Jerusalem’s Eastern Gate that has caused many students of prophecy to sit up and take notice. The book of Ezekiel contains several references to a gate that faces east. In Ezekiel 10:18–19, the prophet sees the glory of the Lord leave the temple through “the entrance of the east gate of the Lord’s house”; the glory then moves east of the city to the Mount of Olives (Ezekiel 11:23). Later, Ezekiel sees the glory of the Lord return to the temple via “the gate facing east” (Ezekiel 43:1–5).

Then, in Ezekiel 44:1–2, we read of the gate being closed: “The man brought me back to the outer gate of the sanctuary, the one facing east, and it was shut. The Lord said to me, ‘This gate is to remain shut. It must not be opened; no one may enter through it. It is to remain shut because the Lord, the God of Israel, has entered through it.’” Finally, in Ezekiel 46:12 we read that there is one person, a “prince,” who may enter via the eastern gate: “When the prince provides a freewill offering to the LORD . . . the gate facing east is to be opened for him. . . . Then he shall go out, and after he has gone out, the gate will be shut.”