Here is Tasha, the good writer. Who is her reader? No one who voted for Trump, or, anyone who subscribes The Rapture. Did Carrie go to AA meetings where mercy is shown everyone who comes in the door, especially the Newcomer. Getting, and staying sober – is very hard! Tasha is very hard on Carrie, for Harrison Ford’s sake? As a married man he GRABS Carrie and begins kissing her while she is very drunk. Did he grab her pussy? Did she want her pussy grabbed?  Ford is an actor. Actors are not deacons of their church. So why – after Trump got sixty million votes from sane and sober voters – is the truth Carrie had an affair with a married man – so topical! Is it because they are famous and connected, and you are not? Of course! This stuff is right out of the Bible. Everything is going fine for the hero. He is worshipped an adored. Then, he is grabbed, assaulted, and crucified. Carrie is being crucified!

Tasha is like a Catholic Priest ‘Of The Worst Kind’. Carrie must undergo a ritualistic cleansing – even though she is dead. Only after she has been forgiven of her Hollywood Sins, will she – and Ford – be able to immortalized in marble, and take their place amongst the Hollywood Gods, such as Elizabeth Taylor and Richard Burton, who are in her tree. Gods were kin to one another.

Garth Benton was a minor actor, as was his first wife. The Liars Club said Carrie was working on Christine’s biography. I was forced to consider this was a lie, made, to scare off other writers. The Ghost Writers Pierrot hired could have plagiarized Tasha’s Slice&Dice machine, but, all their literary failures – had their day – before Carrie’s death. This is a Victimless Crime.

“Fisher’s previous memoirs, Wishful Drinking and Shockaholic, are also about heavy, hurtful experiences. In those books, she explores clinical depression, substance abuse, an overdose, the extremely public separation of her superstar parents, her father’s death, her melancholy friendship with Michael Jackson, her weight gain and obsession with her looks, her therapy and treatment, and her lifelong low self-esteem. And she does all of it with a silly, surreal sense of humor that occasionally veers into Borscht-belt hamminess. She avoids self-pity, even when she’s talking about self-loathing. Those books are a strange, sweet peek behind the endless merchandising, the iconic film images, the familiar face on the Star Wars posters. It’s hard to believe that someone held up as an icon of beauty and provocative sexuality hated her face and body so much, and that someone so frank, outspoken, and bold about the problems women face in Hollywood had so many problems with courage. If anything, her first two memoirs are inspirational, because they reveal what a strong, confident figure she was able to be while she was feeling so weak and lost.

Finally, after four hit novels, Carrie Fisher comes clean (well, sort of ) with the crazy truth that is her life in her first-ever memoir.

In Wishful Drinking, adapted from her one-woman stage show, Fisher reveals what it was really like to grow up a product of “Hollywood in-breeding,” come of age on the set of a little movie called Star Wars, and become a cultural icon and bestselling action figure at the age of nineteen. 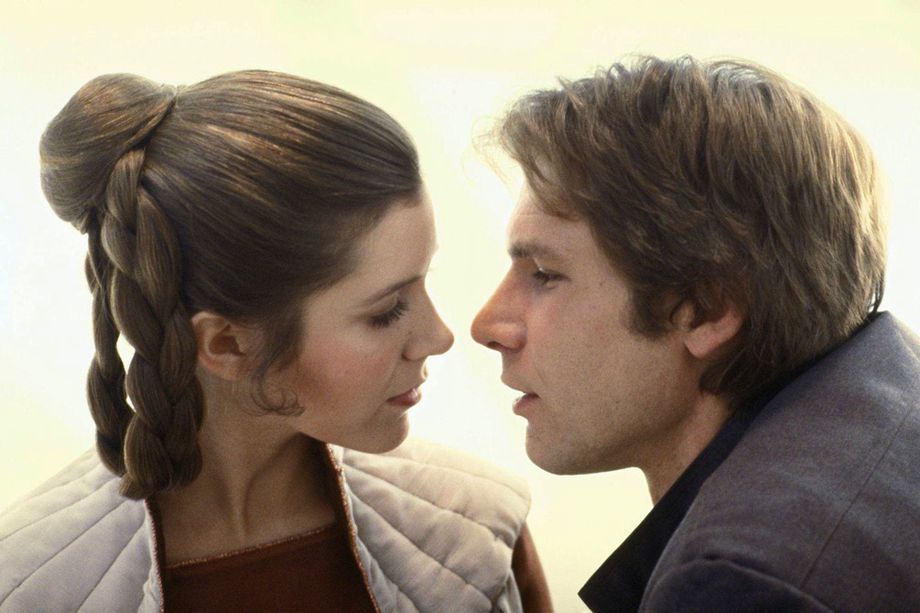 In the wake of Carrie Fisher’s unexpected death at age 60, her new memoir, The Princess Diarist, is an unexpectedly emotional read. But the emotions aren’t grief and nostalgia so much as alarm and sympathy. Early in the book, she tells a thoroughly appalling story that she presents as a cheery little romp. In London for the filming of 1977’s Star Wars: A New Hope, Fisher attends George Lucas’ birthday party, where she’s “essentially the only girl” in a room full of hard-drinking crew who are loudly whinging that they’d rather shoot in “a nice remote location… where there’s no bloody shortage of strange but friendly quim.”

At the time, Fisher is 19, and by her own admission, naïve and agonizingly insecure. So when the crew members briefly stop teasing her (“here’s our little princess without her buns”) and decide to get her drunk, she quickly caves, even though she hates the taste and effects of alcohol. “It makes me stupid, sick, and unconscious really fast,” she admits. “I’ve never actually been drunk—just senseless and inert.” But she wants to fit in. A couple of drinks later, she’s reeling and incoherent, at which point several men surround her and try to hustle her out of the party, “to wherever movie crews take young actresses when they want to establish that the actress belongs to them.”

Then Harrison Ford steps in, in what sounds like a real-life version of a movie scene: “Pardon me,” he tells a crew member who claims Fisher wants to get a little air, “but the lady doesn’t seem to be very aware of what she wants.” An argument breaks out, and Ford yanks Fisher away from the party and into a car — and starts making out with her. He is married and has two kids. He is 14 years older than her. She is drunk, and he just finished saying she isn’t aware enough to make rational decisions. And that’s how their affair starts: the affair everyone wrote about with a frisson of pop culture glee when The Princess Diarist came out a few weeks ago. The real-life Princess Leia and Han Solo, at the height of their youthful hotness and iconic movie star familiarity, got it on while shooting Star Wars, then kept it secret for nearly 40 years! What a story!

Intimate, hilarious, and sobering, Wishful Drinking is Fisher, looking at her life as she best remembers it (what do you expect after electroshock therapy?). It’s an incredible tale: the child of Hollywood royalty — Debbie Reynolds and Eddie Fisher — homewrecked by Elizabeth Taylor, marrying (then divorcing, then dating) Paul Simon, having her likeness merchandized on everything from Princess Leia shampoo to PEZ dispensers, learning the father of her daughter forgot to tell her he was gay, and ultimately waking up one morning and finding a friend dead beside her in bed.

Wishful Drinking, the show, has been a runaway success. Entertainment Weekly declared it “drolly hysterical” and the Los Angeles Times called it a “Beverly Hills yard sale of juicy anecdotes.” This is Carrie Fisher at her best — revealing her worst. She tells her true and outrageous story of her bizarre reality with her inimitable wit, unabashed self-deprecation, and buoyant, infectious humor.

Wishful Drinking is an autobiographical humor book by American actress and author Carrie Fisher, published by Simon & Schuster in 2008. Fisher’s book was based on her one-woman stage show, which she developed with writer/director Joshua Ravetch.

The show debuted at The Geffen Playhouse with Ravetch directing. It enjoyed a successful Broadway run and then toured in other cities. In 2010, HBO filmed a feature-length documentary of the stage play.

Wishful Drinking received generally positive reviews from critics. The January 2009 New York Times review described it as a “funny, sardonic little memoir”, but “pretty slight, padded out with big type, extra space between the lines and some family photographs, and it displays at times an almost antic need to entertain. The paragraphs are short, and the jokes – the puns, the wisecracks, the deadpan one-liners – come rattling along at the rate of one every other sentence or so.”[1] Salon.com reviewer Rebecca Traister found the book quite funny in large part, but was disappointed that “instead of pushing aside the twinkling craziness of her outside life to meaningfully reveal the crazy on the inside, as she has always done so well, Fisher is now gathering all the starry stuff around her for comfort and reassurance about who she is and what she means.”[2]

The author, who died on December 27, 2016, had written the following comment in the book, and it was widely published by the news media after her death:

Now I think that this would make for a fantastic obit—so I tell my younger friends that no matter how I go, I want it reported that I drowned in moonlight, strangled by my own bra.[3] 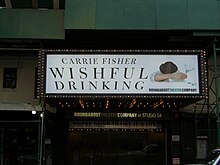 The book followed Fisher’s one-woman play in which Fisher had been performing. Developed originally at The Geffen Playhouse with Josh Ravetch co-creating and directing the world premiere, it moved to Berkeley Repertory Theatre[4] near San Francisco at the beginning of 2008, the production opened in a limited run on Broadway at Studio 54 on September 22, 2009 (previews) and October 4, 2009, and closed on January 17, 2010.[5][6] After its successful San Francisco Bay Area run and before moving to Broadway, Wishful Drinking played at, among other venues, the Arena Stage in Washington, D.C. in September 2008,[7] and Seattle Repertory Theatre April – May 2009.[8]

While the show met with critical and popular success Off Broadway in New York, Fisher soon found herself embroiled in a battle with producer Jonathan Reinis over its production rights.[9] Each claimed lost revenue at the hands of the other.[9] In the end, Joshua Ravetch had co-created the show, collaborating with Fisher from the inception and it was his collaboration and directorial debut at The Geffen Playhouse which toured the country and became a hit on Broadway. A financial settlement was made to Ravetch for an undisclosed amount.[citation needed]

HBO cable television released a filmed documentary of the stage show, directed by Fenton Bailey and Randy Barbato, and first broadcast in December 2010.[10] The 76-minute film was released on DVD on September 13, 2011.[11][12] The film production and DVD received a mixture of reviews. In the Los Angeles Times, Robert Lloyd described the performance captured: “Fisher can be broad, but that is also the person she plays everywhere now: a little larger than life, worn but not worn out. She’s funny as an actress, and as a writer makes memorable phrases”.[10] Boston Globe reviewer Matthew Gilbert wrote, “Fisher’s obsession with her parents and stepparents can be a little tiresome, to be honest, even while her tales of Hollywood absurdity remain outrageous … Fisher even starts to seem boastful about her dysfunction …” Continuing, “Fortunately Fisher does have some self-awareness about the potential for her show to seem like a narcissistic screed. That helps.”[13] DVDTalk reviewer Jason Bailey wrote of the released DVD, “To put across the brilliance of Wishful Drinking, all Bailey and Barbato really needed to do was put Fisher on stage, and turn on the cameras. They do that skillfully and unobtrusively”. The DVD’s content received 4/5 stars, video quality 3/5, audio quality 3.5/5, extras 2.5/5, replay 4/5, with final advice of “Highly Recommended”.[11]