The mission of the revised Knight Templars is to assist every peaceful person in travel across borders.

A former American serviceman who served in Iraq, where he was born, says his sick mother died a day after being turned away from the U.S. as a result of President Donald Trump’s executive order abruptly banning entry to travelers from seven predominantly Muslim countries.

Mike Hager told Fox 2 Detroit that he had traveled to Iraq before the order was implemented, with several family members who were permanent U.S. residents, when his mother fell ill. None of them expected any trouble on their return; Hager is a U.S. citizen, and his mother has lived in the U.S. since 1995. She had a green card.

But when they checked in at the airport in Iraq, only Hager was allowed through. He left his family behind and returned to his home in Michigan. One day later, he told the broadcaster, his mother passed away.

“I was just shocked. I had to put my mom back on the wheelchair and take her back and call the ambulance and she was very, very upset,” Hager told Fox 2 Detroit, recalling the moment they were pried apart at the terminal. “She knew right there if we send her back to the hospital she’s going to pass away—she’s not going to make it.”

Hager and his family reportedly fled Iraq during the Gulf War. After spending four years in a refugee camp, they were resettled in the U.S., Fox 2 reports. A few years later, he decided to return to his home country as an American serviceman, working with the U.S. Special Forces as an interpreter and adviser.

He believes his mother would have survived if she had been able to return to her home and seek treatment, Fox 2 said.

Thousands have gathered across the UK to protest against Donald Trump’s travel ban targeting seven Muslim-majority countries, his indefinite bar on Syrian refugees and his planned UK state visit.

About 10,000 people were thought to have marched on Downing Street in London, with the crowd stretching the length of Whitehall by 7pm. Edinburgh, Cardiff, Manchester and Birmingham also had large demonstrations.

Protesters showed their anger on the day that a petition calling for the US president’s visit to the UK not to be classed as a state visit passed 1.5m signatures.

Speakers in London on Monday evening, including Labour peer Shami Chakrabarti, were barely audible above the chants of “refugees welcome here”, and “Theresa May, shame on you”.

The shadow home secretary, Diane Abbott, told the crowd she had come on behalf of the Labour leader, Jeremy Corbyn. “Donald Trump has been president for only a few days, and look at what he is doing,” she said. “We need to resist the Islamophobia and scapegoating of Muslims, we have got to resist it whether it is in the United States or here in the UK.”

One of the demonstrators in London was Browan Murphy, 17, who had travelled from East Sussex. “I just felt I needed to do something,” she said. “I am scared about what Donald Trump is doing and am angry about how Theresa May has reacted.” 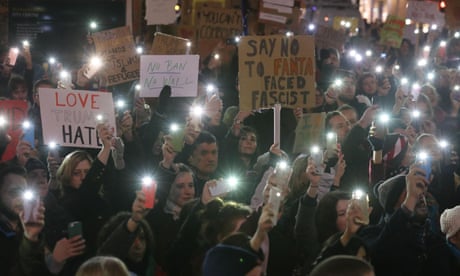 Protests across Britain against Trump’s travel ban – in pictures

Lotte Rice, a 28-year-old Londoner, said: “This is a key time to stand up and make our voices heard. What is happening is dangerous. If we come together, something positive can come from this.”

The London demonstration was one of several in the UK highlighting opposition to Trump’s executive order, issued at the weekend, that imposed a travel ban on people from Iran, Iraq, Libya, Somalia, Sudan, Syria and Yemen.

In Cardiff, several hundred gathered at the statue of the Labour hero Aneurin Bevan to protest. Jim Gray, a student, said he had been shopping for trainers nearby when he saw someone with an anti-Trump placard. “I followed them and here I am. It suddenly made sense to me. I’d been worrying about the travel ban and this seems a way of making my views known. I’ve never done anything like this before.”

That protest was organised by Ash Cox, 18, a history student at Cardiff University. “I’d heard others were taking place across the UK,” he said. “I thought we had to have a demo in Cardiff too. It took off so quickly.”

Claudia Boes, an occupational therapist, organised an anti-Trump women’s march earlier this month. “I think rather than there being individual protests, this is going to turn into a movement,” she said.

Chants heard up and down Queen Street in the Welsh capital included: “No Trump, no KKK, no fascist USA.”

Aled Edwards, chief executive of Churches Together in Wales, said: “I’ve had the privilege of working with ­refugees for the past 15 years and I think his ­treatment of refugees has been appalling.”

The stories you need to read, in one handy email

Omar, a 17-year-old Muslim student, said his confidence had been knocked by the start to Trump’s presidency. “I’ve travelled quite a bit in Europe and in the US. Suddenly I’m thinking will I be able to go to the US? I was born in ­Cardiff. I feel British and Muslim. But what he is doing is scaring me.”

In Edinburgh, several thousand protesters packed out a civic square in the city centre, before marching to the Scottish parliament. They chanted: “Say it loud, say it clear, refugees are welcome here”, and: “Resist, revoke, stop Donald Trump.”

Trump was greeted by protesters when he visited Holyrood to protest at Scotland’s support for windfarms five years ago. To cheers from the crowd, Assad Khan of Edinburgh University’s Islamic society, said: “This campaign of dehumanisation has to stop; of women, of Muslims, of the LGBT community, of disabled people, of all minority groups. It has to stop.”

Demonstrations were also under way in Glasgow, Aberdeen and Dundee. Placards and banners were held aloft in the former as a crowd of about 500 people chanted “hope not fear, refugees are welcome here”. Glasgow’s demonstrations continued in George Square after a three-hour rally in Buchanan Street.

In Manchester, a crowd gathered at Albert Square, outside the city’s town hall. The site is a stone’s throw from Lincoln Square, where a statue of Abraham Lincoln, the 16th US president, was erected to give thanks to Lancashire’s cotton workers for “their fight for the abolition of slavery during the American civil war”, after an economic blockade of slave-picked cotton from the southern US states caused massive unemployment in the region’s cotton industry.

Clare Solomon, 43, an agency catering worker, said: “Donald Trump did not get the support of the majority of Americans who voted in the presidential election. He has even less support for his sexist, racist, war-mongering, pro-business policies in this country.

“The grovelling of Theresa May, who hasn’t been elected prime minister by anyone, even in her own party, is repugnant and unacceptable. Her offer of a state visit is appeasement of a reactionary bully. It should be withdrawn.”

Solomon said she hoped Monday night’s demonstrations would be the beginning of resistance to Trump. “Last week [at the women’s protest], we could just feel that something new was in the air. People were talking about it all over the place. In the coffee shops, on the bus this morning on the way to work … there’s a real buzz. There’s a real feeling of anger, but also a feeling of hope that’s there’s something we can do if we all unite together.”

Dean Smith, a 24-year-old sports journalist, was the main organiser of the Manchester protest. Smith said a tweet by American writer David Slack had prompted him to act on his horror at Trump’s directive.