Herping and Jogging For Art Dollars

Here is a detailed photograph of Rocky Point. Do you see the “beach” and “sand” Shamus Dundon mentioned in his e-mails to me?

Here is part of the house my kindred stayed in. When I walked down to the “bowl” carved out by large cascading waves, the going was difficult due to many rocks and boulders under the ice-plant. You can see some of them, the larger ones, where perhaps a lizard might perch?

When I caught lizards as a boy, I did so after I snuck up on them. How about you? Shamus’s lizard hunt involved “jogging” along the steep cliffs while he looked for lizards – by himself! I looked down to make sure I did not stumble. How come he didn’t take his eight year old niece with him, she too not finding sea urchins in nonexistent tide-pools.  Vicki told me her son got a headache and went back to the guest house – where he read a book. Was this book about Herping?

Shamus said he worked up a sweat jogging. Look how steep this area is. Normal people jog on paths.

There are three scenarios that could explain how Christine ended up in the water. One is, she was thrown off the cliff near the house. The other is, there was a fishing expedition. Drew gets taken in, while Vicki runs up to the house to call 911. Christine runs down to the bowl, and jumps in to save her daughter, after Shamus refused to be the hero. The third is, Vicki, Shamus, and Drew go down to the bowl to get close to the huge plumes of water being thrown high into the air as the waves hit that wall in the narrow cove. They get caught by a big wave. Only Drew is taken. Vicki runs up to the house to call 911. Christine runs out of the house – without her jacket on! She was not wearing a coat when taken out of the ocean. Consider the wind-chill that morning.

Whole families have been wiped out trying to save each other. Why the lies? My niece Shannon was twenty-eight. If she knew her mother was dead because Vicki and her son were extremely careless, then she would have power over them in the Probate. Vicki was first named Executor. Vicki took family partnership lithographs from the estate which she asked me to sell with the help of the framed Pinecone account draped in black ribbon. I refused. Disgusting! My investigation was underway.

Look how the neighbors got down to the sea. They built stairs! How could any parent let a child enter that bowl? Would you sit there with your back to the ocean? What happened to the tide-pools? 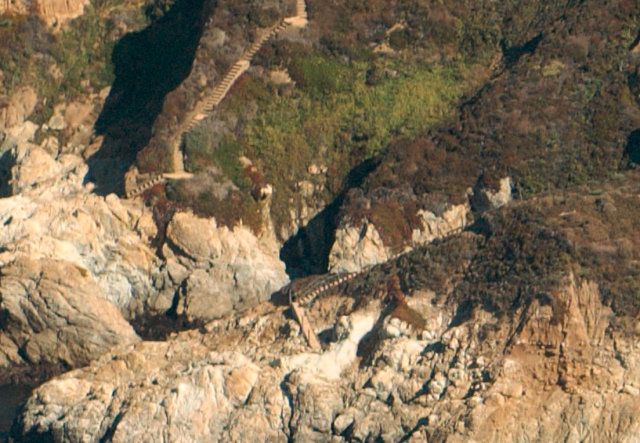 “Your accusations are tiring. I never once said I was jogging around to get warm. You will never find anywhere that I said or wrote that, because it’s completely untrue. I used to term jogging to describe how I got from one rock to another. Also one of your other posts
reminded me I did have a headache also. I was sweating.

SHAMUS: “I was bundled in a jacket myself the morning she died. It was blustery. I only got hot after running around(jogging maybe) looking for lizards. I doubt she took off the jacket b4 she was taken by the wave.”

1 Response to Herping and Jogging For Art Dollars