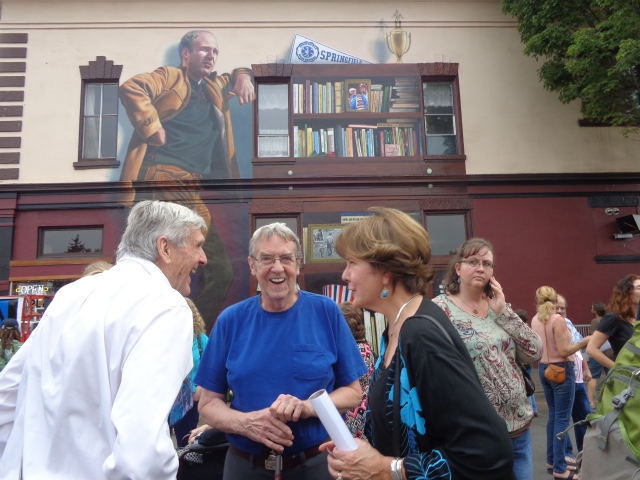 There once were two Kesey Murals in Springfield. My friend Nancy described the first one and got one of names of the artists, right, so I was able to restore the lost description of the mural that was painted on the outside wall of the The Creamery that Chuck told me the town leaders hated.

“It was the only mural for a hundred miles around, and, it had to go!” Said the husband of Sue Kesey, and brother-in-law of Ken.

“There was a caldron with marijuana plants!” Nancy, of yogurt fame, added.

“Wasn’t there a Unicorn?” asked I.

How did Ken get so big? It’s like ‘The Attack of the Fifty Foot Author’.

Kesey towers over the Springfield Lilliputians, his family, and his friends. He is bigger than life! Why? What was the motive or inspiration of the folks that came up with this concept. He has a name. I captured him on camera. Let’s call him ‘White Rabbit’ for now.

I suspect this gigantism came about when the mayor and her people wondered how they could brand Springfield and put this little town on the map. In the middle of the night Ken was brought over, and staked down. As yet, the Eugenius don’t know what hit them. They thought the had Ken all sewn up and in their back pocket. Now, he is too big to fit there – or go home! The DeFazio Bridge would collapse under his weight. Remember how popular that bridge was when it was built?

I consider myself an Art Historian. Have you seen the show ‘Histories Mysteries’? I and others were investigating the Mysteries of the Priory de Sion, when Dan Brown came along and shrunk us. For a couple of years, about fifty folks got to do James Burke whose show ‘Connections’ was one of my favorite. Burke would show how one minor invention led to a bigger one, and after twenty more seemingly irrelevant connections, one alas arrived at the Great Invention.

In looking to see if I am on the right track, or, something is authentic, I look for Verivicators. I found many, but none was more HUGE than the appearance of Nancy Hamren on the scene. Nancy is the Grande Connector. She is the point of the compass. She sets the radius. She makes the inclusive and exclusive circle – and she may not fully know why and how.

In my sphere of reality, Nancy is the embodiment of my kindred, Jessie Benton, who was the patron of  Brett Harte, and, Gutzon Borglum, who carved Mount Rushmore. Jessie wrote Fremont’s journals about his exploration of Oregon, and accounts of the Native of the Willamette Valley. The Pathfinder is kind of honored in the mural on the Emerald Arts building, two blocks from where Ken stands – like King Kong!

Jessie is the great-aunt of the muralist, Thomas Hart Benton, who was the cousin of the late muralist, Garth Benton, who was married to my late sister, the famous artist, Christine Rosamond Benton, who lived with Nancy in a famous Hippie Commune on Twenty-Second Avenue next to the San Francisco Panhandle. We lived with the Zorthian sisters, whose father was a famous muralist, who was inspired by Thomas Hart Benton. Jirayrl Zorthian is titled ‘The Last Bohemian’. Ken could be titled ‘The Last Hippie’.

Then there is Ralph Stockpole’s ‘Pacifica’. Ralph was a good friend of the muralist, Diego Rivera. I formed a bond with the artists who did a stellar job on the Kesey mural. I will rave about them in my next post.

What I have just done is make Ken’s image – twice as big! It is getting up there with Mount Rushmore. But, this GIANT may have been built on quicksand. Springfield may not have a rightful claim to Ken. Indeed, this may be a case of Creative Kidnapping.

This is where Chuck and Sue comes in, and members of the Odd Fellows who are up in the second floor looking down on us, as we seemingly look up at them. When I talked to Chuck I asked him if he has any old photos of the mural that was painted on the outside of his successful enterprise. He told me he has a dusty cardboard box up in the attic at the new Creamery. He was being facetious, pointing out his brother-in-law was the attention-getter in the family.

Nancy said there is a movie in the works – about Ken! I don’t see it. I see a movie about Chuck, Sue, and Nancy. Not only were they a Hip Anchor for this town, but an anchor for all Hippie Enterprises – all over the world. Millions of people have started tiny Bohemian businesses – that were real adventures!

The Kesey Family owned the Creamery that anchors the new family mural. The key word here is – FAMILY. There are several creative family legacies here, as well as extended families. This unveiling was a Family Event. It was a Harmonic Convergence of Family Ideals. I see a famous Japanese director bowing before Chuck and Sue, begging him to allow this humble director to immortalize them on the silver screen. Why would he want to do that? Because in Japan, Chuck, Sue, and Nancy, would be National Treasures.  The two Kesey murals constitute an indelible cultural contribution that needs to be defined and recorded.

Chuck hires Samurai Warriors to protect the mural of the happy dancing milk cans, that will become famous cartoon characters in Japan. Schoolchildren will wear backpacks that look like happy milk cans with happy feet that dance while they run to school to learn about the honorable path of life – via a family business! Uncle Chuck is on all the talk shows. Giant banners with Nancy’s happy face are carried in massive parades!

I never saw more Winners in one place. As bubbles danced around our head, my childhood friend and I went back in Mr. Peabody’s Way-back Machine to the first Human Be-in at the Polo Grounds. Steve was with us. He was annoyed. I asked Nancy is she recalled us concluding;

“We don’t want leaders? Who asked for leaders?”

On stage appeared Allen Ginsberg, Timothy Leary, Michael McClure. We had no leaders, no one to guide us and make rules for us. We were a Family of Equals. We were counting noses. We thought we would live forever. Seeing Nancy again is a highlight of my life. We carry matching pictures that go back to when we were twelve, when one first leave the natal family circle, and form another circle, with your beloved friends. Yesterday, Ken was with his friends, his beloved family – and his fellow Pioneers!

Announced on the cover of the first edition of the counter-culture magazine San Francisco Oracle, the “Gathering of the Tribes” or “Human Be-In” as it came to be known, was the prototype of all 1960s counter culture celebrations.  The Human Be-In precipitated the legendary Summer of Love, and made San Francisco’s Haight-Ashbury the epicenter of the burgeoning hippie movement.  The Be-In featured all the luminaries of psychedelic counter-culture, including Timothy Leary, Allen Ginsberg, Gary Snyder, Richard Alpert (Ram Dass), Dick Gregory, Lenore Kandel, and Jerry Ruben.  Many of the Haight’s best musical acts also performed, including the Grateful Dead and Quicksilver Messenger Service.  It was at the Human Be-In that Timothy Leary coined his famous phrase, “Tune in, Turn on, Drop Out”.  LSD was provided en mass by the legendary chemist Stanley “Bear” Owsley, who was also the sound operator for the Grateful Dead and is the namesake behind the famous Grateful Dead dancing bears.  The Diggers provided free food to the crowds, which were estimated in excess of 30,000.  It was this huge number of spontaneously gathered celebrants that attracted national media attention to the psychedelic Haight-Ashbury community, and made everyone involved realize that a profound new movement in American culture was being born.  The ethos of this new movement was a fundamental questioning of authority, a focus on individuality, decentralization, ecological awareness, and consciousness expansion through cultural openness and the use of psychedelic drugs.  These ideas transfixed mainstream culture, and the phenomenon of the “hippie” burst full force into the public consciousness, transforming a generation.

James Burke (born 22 December 1936) is a British broadcaster, science historian, author, and television producer, who is known, among other things, for his documentary television series Connections (1978), and for its more philosophically oriented companion series, The Day the Universe Changed (1985), which is about the history of science and technology. The Washington Post called him “one of the most intriguing minds in the Western world“.[2]

Burke established his reputation as a reporter on the BBC science series Tomorrow’s World. He was BBC television’s science anchorman and chief reporter for the Project Apollo missions, as the main presenter of the BBC’s coverage of the first moon landing in 1969. In collaboration with Mick Jackson, he produced the ten-part documentary series Connections (1978), which was first broadcast on the BBC, and subsequently on PBS in the United States. Connections traced the historical relationships between invention and discovery: each episode chronicled a particular path of technological development. Connections was the most-watched PBS television series to that time.

First-generation American artist Gutzon Borglum emerged onto the national scene when he carved into history the heads of four U.S. presidents on Mt. Rushmore, deep in the Black Hills of South Dakota.

Although his earlier paintings and sculptures would be overshadowed by the mountainside known as the Shrine to Democracy, many of his works were crafted in Los Angeles and the town where he lived, Sierra Madre.

Like Mt. Rushmore itself, Borglum was a larger-than-life figure who demanded attention. Amid a career that spanned more than half a century, he carried on a romance with the California landscape, painting hundreds of seascapes, landscapes, crumbling mission exteriors, championship horses and a portrait of Gen. John C. Fremont, as well as sculpting a bust of Fremont’s wife, Jessie Benton Fremont, and the Los Angeles Times’ bronze eagle.

Frémont’s initial notability came from her family: she was the daughter of Missouri Senator Thomas Hart Benton and the wife of military officer, explorer and politician, John C. Frémont. She wrote many stories that were printed in popular magazines of the time as well as several books of historical value. Her writings, which helped support her family during times of financial difficulty, were memoirs of her husband’s, and her own, time in the American West—back when the West was an exotic frontier.

A great supporter of her husband, who was one of the first two Senators of the new U.S. state of California and a Governor of the Territory of Arizona, she was outspoken on political issues and a determined opponent of slavery, which was excluded from the formation of California. By maintaining a high level of political involvement during a period that was extremely unfavorable for women, Jessie Benton Frémont proved herself to be years ahead of her time.

1 Response to Tale of Two Murals