The Equestrian College of Knights and Ladies 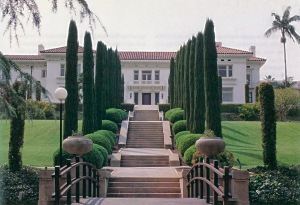 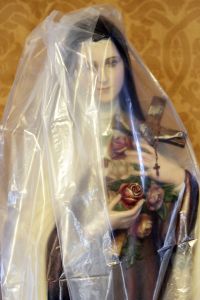 In March of 2006 I suggested my daughter baptize my grandson at the Carmelite monastery in Oakville near Napa. I included the ancient ritual of the Carmelites and the Order of Saint George of Rougemont. Because I believe the Nazarite Holy Spirit of Saint John the Baptist ‘The Returned Elijah’ is directing me to restore the Vision of Herbert Armstrong who founded Ambassador College, I am taking steps to found The Equestrian College of Knights and Ladies. Because many young people seek a Higher Law of Chivalry that promotes Western History and Creative Cultural Activities, this institute will turn out a new generation of scholars who will be able to meet the growing ignorance in the world that is spreading a barbaric intolerance like the world has never seen.

How to combat radical groups who employ the internet, will be a focus, as well as creating webpages. The Crusades will be studied. A think tank can produce political advisors. Napa and the surrounding area are known for raising horses. Learning to ride will develop a connection with our revered past.

Here is the entrance to the Falcon Art College, and rectors parading past the Pope’s College for poor students. Also, is the oldest surviving Dutch painting of three generation of the Roover family who married into the Rosemondt family, and were Swan Brethren as well. That is Saint George leading them before Our Fair Lady.

Herbert Armstrong established the Ambassador College in order to preserve and promote Western Culture. In this respect he was a Protestant Pope. The Hulett Merrit mansion was the first home of this college. Amazingly, it looks like the home of the Carmelites that may be closed due to the severe damage it suffered during an earthquake. A means to solicit funds for repairs has not yet been established. What a tragedy.

My ancestor, Godschalk Rosemondt, was the Master of Louvain and the Falcon Art College, as well as member of the Swan Brethren.

A Rosamond family researcher has seen letters exchanged between Godschalk Rosemondt and the great Erasmus with the seal of a dancing wolf upon them. This is a Bosch seal related somehow to the Janskirk church where attended members of the Swan Brethren. The Renaissance artist, Hieronymus Bosch, executed commissions for the Brethren and their church. One such work is titled the Seven Deadly Sins which is the subject matter of Rosemondt’s book ‘Confessionals’.

Rosemondt’s good friend, Pope Adrien, has been anointed the Vicar of Christ. Before that he led the Inquisition in Holland. He was the tutor of Charles Quint whose cote of arms in seen next to Rosemondt’s Rose Name, that looks very much like the rose emblem of the Swan Brethren that today, only Holland’s royal family is allowed to wear.

My sisters saw a blue angel in their room when they were ten and six. Members of my family who were sisters of Franciscan Order, also had visions. One of them founded Briarcliff College. 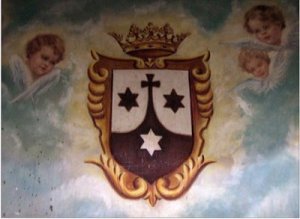 The Sisterhood of Rougemont
Dear Daughter;
Thibaut and Humbert de Rougement were Bishops of Besancon and the ancestors of Guillaume de Vienne who co-founded the Order of Saint- George ‘Brotherhood of Rougemont’ that was taken over by the wrong people during the Reformation. The Rougemonts fled to England and Canada, where as members of the Canadian Parliament, they admitted members into the Loyal Orange Order. Bennett Rosamond was a master of the LOL.

The Hulett C. Merritt mansion, also called the “Villa Merritt Ollivier”, is a historical structure in Pasadena, California. It was featured in the opening scenes of The Millionaire, a popular TV series of the 1950s. Merritt’s fortune was made largely in the railway and steel industries.[1]

The Noble Order of Saint George of Rougemont was a baronial order of chivalry established around 1440 in the Free County of Burgundy. From the 15th through the late 18th centuries it enjoyed the protection of the Dukes of Burgundy and later the French kings, but it was abolished in the wake of the French Revolution and became extinct after the death of the last knight in 1869.

The order has been revived at least twice in the 20th and 21st centuries, and a confraternity under the name now exists with members in France, Germany, Japan and other countries.

The three-story mansion was eventually yellow-tagged by inspectors. An adjacent chapel was not damaged and remains usable, along with other smaller outbuildings. Selected events may go on at the property, but they cancelled all retreats through the end of the year. “For much of what we did, we are not able to do it on site,” he said.

Werner said that before the quake, the Carmelites were already discussing the long-term viability of the main house. “The earthquake hastened the conversation,” he said. Today, he’s not sure how they will pay for the repairs to the property.

“We’re going to have to decide whether we can stay here or not,” he said. “We’ve been here since 1955.” To leave the property and find a replacement home for the monastery would be difficult, he said.

The nonprofit organization has received some donations to start repairs. The group was even able to hold a yearly benefit dinner scheduled for early September which was “quite successful,” he said.

However, the order hasn’t started a full-on fundraising campaign to fully restore the property, Werner said. “Two questions we haven’t answered – will we stay here, and if we do, what do we want to do with the property and the buildings?” Until the structural and other evaluations and assessments are completed, “I’m trying to take things one step at a time. There are a lot of things we don’t have answers to,” yet.

In 1960 a second campus was opened at Bricket Wood, Hertfordshire, England, and in 1964 a third campus was opened in Big Sandy, Texas. At the time Ambassador closed for financial reasons in May 1997 it had operated for 50 years and had become regionally accredited by the Southern Association of Colleges and Schools.

The motto of the college was Recapturing True Values. Although most students of the college were associated with the church, it was not a strict requirement. Nonetheless, the students and faculty were primarily those with church affiliation.

Throughout most of its history, Ambassador operated under state approval or its international equivalent. Regional accreditation was not sought, primarily because it required that the college have a functioning board that was separate and distinct from the church’s administration.[1] Armstrong resisted this requirement, apparently concerned that such a separation would result in the truth of God, as he believed and taught it to be, being watered down at an Ambassador that would become increasingly secular. He held this opinion despite the fact that numerous accredited colleges and universities around the country were operated by the Catholic Church, The Church of Jesus Christ of Latter-day Saints and other Christian denominations, without those organizations being required to alter church teachings.

Aside from being the identified sponsor of The World Tomorrow radio broadcast for a time (although the costs for the broadcast were paid by the church), the college in Pasadena became locally well known for its Ambassador Auditorium worship and concert venue, which for 20 years was host to many renowned artists from classical music to jazz. The concert series closed in 1995. The auditorium was largely unused for a decade until a portion of the Ambassador campus was sold to interdenominational Maranatha High School and a smaller portion, including the auditorium, to HRock Church.

The Bricket Wood campus operated for 14 years at Hanstead House, a few miles north of London. The estate had belonged to Annie Henrietta Yule and her daughter Gladys, who used it for their Arabian horse breeding farm, the Hanstead Stud. The college operated in the house and grounds for fourteen years. Leading administrators on the campus

The campus is now the site of the International Alert Academy (Air Land Emergency Resource Team), and was used to accommodate refugees from Hurricane Katrina in the fall of 2005. The campus golf course, renamed Embassy Hills Golf Course, is now open to the public.

The first phase of ALERT instruction is Basic Training, a 9-week program modeled after military boot camp. It combines intense physical training with spiritual leadership development through rigorous hikes, drill and ceremony, survival training, and strict uniform and living area inspections. The goal of basic training is to equip the Recruits with the skills and discipline to be more godly men. In order for the Recruit to promote to the rank of Responder (the first ALERT rank) he must pass these inspections, maintain a daily journal, pass minimum physical standards, demonstrate character, and memorize the New Testament book of 1 Peter in the King James Bible.

As a disaster relief organization, ALERT is deployed at the request of government officials. Is officers and students serve locally and internationally in response to natural disasters such as floods, hurricanes, tornadoes, and ice storms.

As a public service organization, ALERT Responders use their dive recovery training, sawyer, and land search and rescue training to serve local authorities on a volunteer basis. They respond upon request from government officials. In addition to specialized skills, ALERT units have volunteered to serve in projects including cemetery cleanup, playground construction, children’s camps, and community improvement.

1 Response to The Equestrian College of Knights and Ladies