Trying To Save The Rosamond Legacy 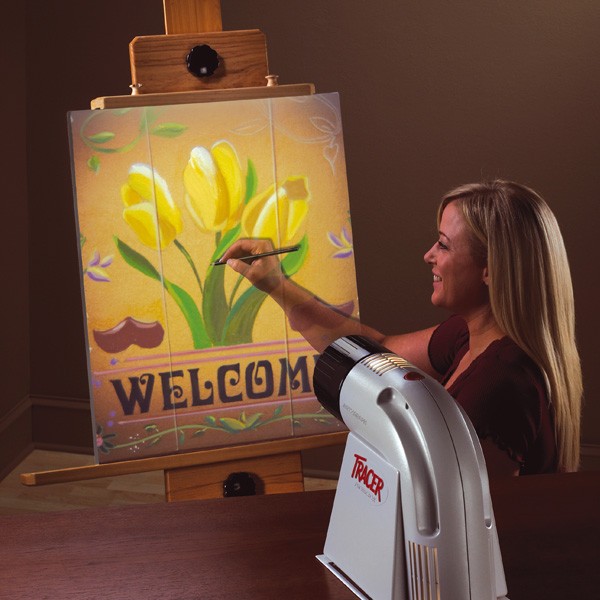 The following is from ‘When You Close Your Eyes’ the first biography of Christine Rosamond by Tom Snyder. This is the testimony of Garth Benton, and artist, and cousin of Thomas Hart Benton.

“Christine worked almost exclusively from photographs and figures she cut from magazines like Vanity Fair and Vogue and Glamour,” Garth recalls. “That’s why the women in her middle period were so exquisite – the inspiration for them came from elegant magazines that set the standard.”

After Christine offered to teach me her style, I discovered the secret of it when I went looking for her bathroom. I opened the door to a closet by mistake. Inside was a large artist’s projector. Christine was in pain to be found out. She came and sat down with me;

Rena Easton’s sisters appeared in fashion magazines. Rena was on a poster. Here are the true Rosamond women. This is why I was so thrilled to receive that letter from Rena, where she wrote “Rosemond” on the envelope. I cried because I had an heir, and, would soon be seeing the Rosemond Archetype face to face.

Mark and Vicki Presco appeared to bless my biography, but when I caught my aunt Lillian giving an interview to rival biographer, Tom Snyder, at her home, I knew I was being tricked. Tom and Stacey Pierrot wanted my story -m their terrible book that did not sell. It was self-published by the Rosamond gallery owner, after Sydney Morris gave Pierrot permission to write it. No major publishing house would touch it. It demonized and blames everything that went wrong – on the dead artist! They tried to do what I have done in this blog. They failed! My siblings got to proofread both books. They are not artists and writers. This suggests Sydney Morris was secretly catering to them, he and Robin Beare fearing for their lives – because the adult Heir, Shannon Rosamond, was out of control!

Royal Rosamond is mentioned once, he mistakenly made the author of the Squaw Man that was Cicel B DeMillies first movie. This producer made western’s famous. Almost every male in Montana thinks they are a cowboy. It’s all an illusion! Rena was an expatriate who married a British Admiral and lived in Britain. She comes home, lives in Montana, and is a Real McCoy Redneck. I am sure she and her redneck friends did not like these words I used in the Letter of Evil…….”Pyschic search”  I got that search – right! Hired ghost writer, Tom Snyder, didn’t bother to google ‘The Squaw Man’ and thus forever did he get it wrong in his book. Do any members care if Their Boy, is stupid? How about Rena?

The outside ghost writers included next to nothing of what you read in this blog. I have put Christine amongst the greats. Here is Morris’s contribution – after shoving me in the gutter.

” A biography of the descendent was written, and efforts continue to negotiate the movie rights to the inventory, pay off the creditors, and have something left for distribution to Petitioner and her sister.”

The Petitioner is Shannon Rosamond/Benton, who was set up for an arrest to get her out-of-the-way. The “sister” is Drew Benton whose amazing family history was neglected. These Gallery Gargoyles also did not know Elizabeth Rosemond Taylor is in our family tree.

Here is Morris going after the pin holes in the walls that would take ten minutes to repair. Christine pinned watercolor paper on the wall – after she traced a faint image using her projector she had in the garage.

“Furthermore, the decedent had used the property as a studio. The floors and walls were in terrible condition and it appeared the decedent had sued the walls as painting surfaces: pinholes and paint splotches were everywhere.”

This is a lie! First of all, it was Christine’s property. The holes and paint were on the walls of one bedroom. I saw them there. I also saw about four indentations in the carpet that told me framed artwork had rested on the floor.

Vicki told me she and Shannon divided up unworn clothing and jewelry days after my sister was dead. My surviving sister took her share of the partnership prints. Then, Vicki signs this affidavit, that will be put alongside the fake Restraining Order Rena signed.

According to the evangelical right-wing racist philosophy, Rosamond had the right to blow up that wall full of pinholes, because, the “collective” of ungifted people had come to own her. The biggest mistake I made was to tell anyone I was authoring a biography, especially Rena and my daughter who do not like how their life turned out, so the blow up my book.

The biggest mistake Christine Rosamond made was to tell the ‘Rosamond Collective’ she was authoring a autobiography in order to get out of debt and revive her waning popularity – and then she files Bankruptcy!

“Respondent learned that she had been living off loans from friends and business acquaintances for years.”

Mark was furious that our sister would not be paying back the $3,000 dollars he lent her. Vicki had invested $60,000 in the family partnership. I believe aunt Lillian made a big loan. If Rosamond’s book was a big hit, and they made a movie from it, then, members of our family would be out in the cold. Then, here come that killer rogue wave! 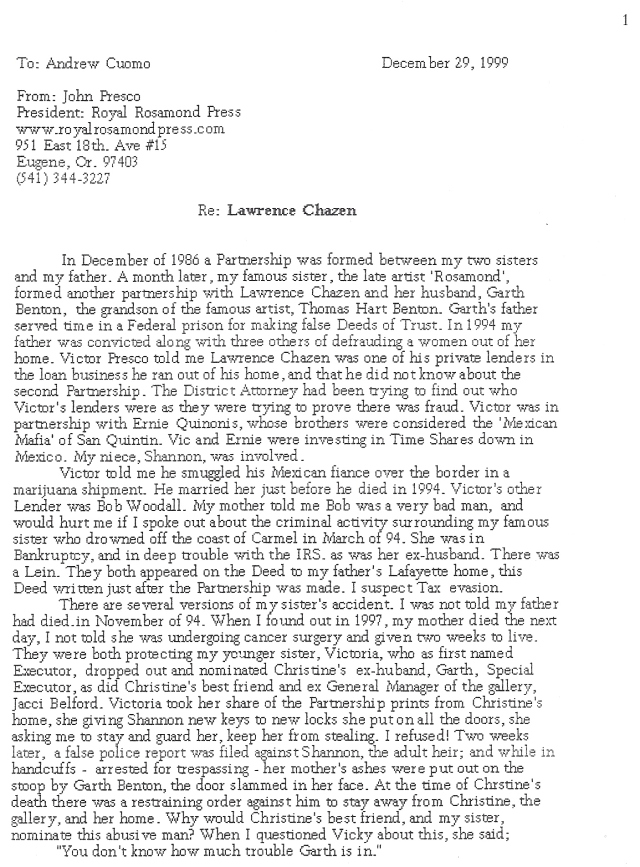 I have proven that Royal Rosamond – was real! Mark exiled me from his family!

“Now, in our age, collectivism, the rule of the second-hand and second-rater, the ancient monster, has broken loose and is running amuck. It has brought men to a level of intellectual indecency never equaled on earth. It has reached a scale of horror without precedent. It has poisoned every mind. It has swallowed most of Europe. It is engulfing our country.
“I am an architect. I know what is to come by the principle on which it is built. We are approaching a world in which I cannot permit myself to live.
“Now you know why I dynamited Cortlandt.
“I designed Cortlandt. I gave it to you. I destroyed it.

At my second psychic reading they saw my sister was very creative, but,

“She is oppressing your creativity. I don’t understand why.”

While having dinner with Meredith, I got frustrated, and made this pronouncement.

“I forbid you to think of me as an artist, anymore. From now on – I am an Art Critic! This means you do not get to run my struggle as a real artist thru you voo-doo artist bullshit!”

Even though he wrote a dissertation on ‘The Creative Person’ Mark knows nothing about art and artists. He must have looked over some dudes shoulder at Harvard, He has me hang picture for him because he has no talent. Having a degree in psychology, I see his little wheels turning when I say things like;

“Christine was not a real artist. She was a fabrication. Smoke and mirrors were employed. She took up art because she was on welfare. Her style was dictated to her by her handler. I have spent years trying to legitimize her for the sake of my nieces, my daughter, my grandson, because the Rosamond Brand has value. I am the real artist in the family. I never made any money on my art. My Muse inspired Rosamond to take up art when she was twenty-four. The history of our family that I have put together will save the late Rosamond and our creative Family Legacy. The outsiders are liars and frauds. Their biographies are parasites who have committed crimes against the Art World.”

This is where Mark gets his two cents in. He chooses to see me as the worst case of sibling rivalry anyone has ever seen. I am a rabid dog who wants to collect and burn all the bad books that he thinks made Rosamond famous for starters! Mark’s solution is for me to forget all I know to be the truthful about the real Art World, and just pick up a brush and paint!

“Are you suggesting I return to my cell at the Funny Farm and commit myself to some serious basket weaving? How dare you! I suppose you believe the lie about the “rogue wave”‘

Five years after Christine Rosamond Benton was dragged into the Pacific Ocean by a “rogue wave”, I discovered the art work of Philip Boileu who was the nephew of Jessie Benton Fremont. I was floored. Christine, nor Garth knew Philip existed, or any of the fake biographers! I have read many books about artists. This is what you look for. You do a search of the artists peers, their family, their influences. You connect the dots. This is what makes artists famous. Here was the solution, the way to undo the Art Projector factor. For some weird reason Philip and Rosamond work is very similar. Why? Why is this important. BECAUSE, there can only be one explanation.

Philip Boileau did thirty-four covers for the Saturday Evening Post. Artists throughout history are connected in ways that need to be studied by great minds. Get going. You can start with my mind. Hook me up to machines. Poke me and take my blood. Stop playing your fucking little games!

1 Response to Trying To Save The Rosamond Legacy