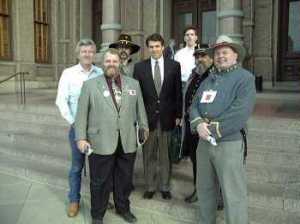 After I posted my last post I turned on the news and heard Governor Pence had signed a law protecting religious people from secular government. This comes after Netanyahu sounded the charge in our Congress. With thirty million evangelical voters behind him thirsting for another holy war, here comes the Christian Crusade out to destroy its No.1 enemy, the Democrats and the Poor. The ZCC (Zionist Christian Crusaders)  have written a bill that cuts aid to the poor and elderly while giving billions more to the military.

Meanwhile, our elected Human Leader sends help to Saudi Arabia to fight the other religious jihadists and terrorists who do evil in the name of their deity. There is no evidence this does anyone any good.

It’s time to bring out the Iron Clad Oath and force ZCC leaders to sign it, starting with Rick Perry who is seen with ne0-Confederates wearing the uniform of Traitors.

“I, A. B., do solemnly swear (or affirm) that I have never voluntarily borne arms against the United States since I have been a citizen thereof; that I have voluntarily given no aid, countenance, counsel, or encouragement to persons engaged in armed hostility thereto; that I have neither sought nor accepted nor attempted to exercise the functions of any office whatever, under any authority or pretended authority in hostility to the United States; that I have not yielded a voluntary support to any pretended government, authority, power or constitution within the United States, hostile or inimical thereto. And I do further swear (or affirm) that, to the best of my knowledge and ability, I will support and defend the Constitution of the United States, against all enemies, foreign and domestic; that I will bear true faith and allegiance to the same; that I take this obligation freely, without any mental reservation or purpose of evasion, and that I will well and faithfully discharge the duties of the office on which I am about to enter, so help me God.”[1]

If a Senate Democrat gets her way, Tom Cotton won’t be writing any more meddling letters to foreign governments.

Senator Debbie Stabenow of Michigan has filed a non-binding, tongue-in-cheek resolution in that aims to prevent her colleagues from meddling with the president’s foreign policy agenda by denying them stationery or electronic devices on which to write letters with that intent.

The amendment to the Senate budget resolution was submitted in response to the open letter sent to Iran’s leadership by Arkansas Senator Tom Cotton and signed by 46 of his Republican colleagues, in hopes of putting the brakes on the ongoing nuclear negotiations with the Obama administration.

The text of Stabenow’s resolution says its purpose is to “establish a deficit-neutral reserve fund relating to the purchase of stationery or electronic devices for the purpose of members of Congress or congressional staff communicating with foreign governments and undermining the role of the President as Head of State in international nuclear negotiations on behalf of the United States.”

While Cotton’s letter was indeed written on official Senate stationery, he presumably still has a few stray pages lying around his office. Ditto the use of Cotton’s existing electronic devices and Senate e-mail address.

And let’s be clear: Stabenow’s act of political trolling does not have a chance of becoming law, much less being introduced for an actual vote as part of the budget resolution.

In a recent interview on Fox, Christian right writer James Robison went off on a rant about how Christian conservatives need to take over the government: “There are only 500 of you,” Robison said of Congress. “We can get rid of the whole bunch in one smooth swoop and we can really reroute the whole ship!”

He added that this takeover would cause “demons to shudder” and the “gates of hell to tremble,” but what was really delusional about it was the idea that Congress is somehow devoid of Christians. In reality, 92% of Congress people identify as Christian. More to the point, nearly every Republican, regardless of their sincerity in saying so, aligns with conservative Christianity, whether Catholic or Protestant, an affiliation reflected in their policy preferences. (One solitary Republican is Jewish.) The Christian right might not own all 535 members of Congress, but with Republicans in the majority, the Christian right is also in the majority.

INDIANAPOLIS — Indiana Gov. Mike Pence on Thursday signed into law a religious objections bill that some convention organizers and business leaders have opposed amid concern it could allow discrimination against gay people.

Indiana is the first state to enact such a change this year among about a dozen where such proposals have been introduced. The measure would prohibit state and local laws that “substantially burden” the ability of people — including businesses and associations — to follow their religious beliefs.

Pence, a Republican, backed the bill as it moved through the Legislature and spoke at a Statehouse rally last month that drew hundreds of supporters. The governor signed the bill in a private ceremony.

Pence said in a statement Thursday that the bill ensures “religious liberty is fully protected under Indiana law.”

“The Constitution of the United States and the Indiana Constitution both provide strong recognition of the freedom of religion, but today, many people of faith feel their religious liberty is under attack by government action,” he said.

Reaction to the decision was swift and divided.

Indiana Right to Life President and CEO Mike Fichter praised the new law, saying it would give abortion opponents legal recourse if they are pressured to support the procedure. The organization circulated an online petition to thank Pence for signing the bill.

Freedom Indiana, which led last year’s successful fight against efforts to add a gay marriage ban to the state constitution, called it “a sad day for Indiana,” saying Pence and lawmakers ignored concerns of thousands of Indiana residents.

“We made it clear that this law will only be used to harm other Hoosiers, and that’s not the Indiana way. The lawmakers didn’t listen. The governor didn’t listen,” the group said in a statement.

At least two groups — the Christian Church (Disciples of Christ) and Gen Con — have said they would reconsider plans to hold their conventions in Indianapolis because of the legislation. The CEO of California technology company Salesforce told the Indianapolis Business Journal his company would reduce its investment in the state because of the law.

Supporters say discrimination concerns are overblown and that the Indiana measure merely seeks to prevent the government from compelling people to provide such things as catering or photography for same-sex weddings or other activities they find objectionable on religious grounds. They note that the law is modeled after a federal religious freedom law Congress passed in 1993 and similar laws are on the books in 19 states.

“This bill is not about discrimination, and if I thought it legalized discrimination in any way in Indiana, I would have vetoed it,” Pence said. “For more than 20 years, the federal Religious Freedom Restoration Act has never undermined our nation’s anti-discrimination laws, and it will not in Indiana.”

However, the current political climate is far different than it was when most of those were approved because the U.S. Supreme Court is expected to rule this year on whether gay marriage bans violate the Constitution.

The Indianapolis chamber of commerce and Columbus-based engine maker Cummins Inc. are among business groups that have opposed the bill on the grounds that it could make it more difficult to attract top companies and employees.

Similar bills have been advancing this year in the Arkansas and Georgia legislatures. Last year, Mississippi enacted a religious objection law just weeks after Arizona Gov. Jan Brewer, a Republican, vetoed a similar effort there amid criticism from major corporations.

Since the year after its 1995 founding, Angie’s List has been headquartered in Indianapolis, Indiana. The $315 million corporation which lets users review local businesses, especially home improvement professionals, has been planning a $40 million renovation of its own, moving its headquarters across town and adding 1000 new jobs over five years.

But thanks to state lawmakers and Republican Governor Mike Pence‘s new Indiana Religious Freedom Restoration Act, those expansion plans have been canceled.

“Angie’s List is open to all and discriminates against none and we are hugely disappointed in what this bill represents,” CEO Bill Oesterle said in a statement today, adding, the expansion is “on hold until we fully understand the implications of the freedom restoration act on our employees, both current and future.”

The company’s statement noted it “will begin reviewing alternatives for the expansion of its headquarters immediately.”

Washington:  The White House has made clear its relationship with Israel has been fundamentally altered; what Benjamin Netanyahu does in government will determine if it can be saved.

Barack Obama’s sustained public criticism of Netanyahu’s election rhetoric has led to allegations of a personal vendetta and even a touch of presidential petulance.

Obama has steadfastly rebuffed Netanyahu’s efforts to row back his election-time opposition to a Palestinian state.

An outright apology for anti-Arab comments was barely acknowledged.”It’s has been a continuously running soap opera between Netanyahu and Obama,” said Aaron David Miller, a former advisor to Republican and Democratic secretaries of state.The Obama administration has hinted it would consider a UN resolution, long opposed by Israel, that would lay out the contours of a peace agreement and the creation of Palestinian state.But, at least publicly, the White House is stopping short of outright support.”We have not yet actually seen the text of a resolution, so I’d reserve comment on a hypothetical resolution at this point,” said White House spokesman Josh Earnest.

The inflection point may be the creation of Netanyahu’s government.

Negotiations to form that government are already advanced. It seems likely to include hardline right wing and ultra-Orthodox parties.

The composition of the cabinet will matter, Washington was no fan of foreign minister Avigdor Lieberman, but it’s not clear Naftali Bennett or other candidates would be any less hardline.

Perhaps more important will be the document that binds Netanyahu’s multi-party coalition.

If Netanyahu’s pre-election anti-Palestinian rhetoric is codified, concrete action is sure to follow.

“The coalition agreement, which they actually have to vote on at the Knesset, will either have to say ‘we support a two-state solution’ or it won’t,” said Jeremy Ben-Ami, founder of J Street, a left-leaning lobby group based in Washington.

“It is a very very clear signal if that coalition agreement, if they can’t even get the words out of their mouth.”

The White House has made it clear that security ties will not be affected, but from there everything else seems to be in play.

Settlement building could be met with measures to halt the flow of financing to those individuals and organizations involved.