I am kin to Aileen Getty via Elizabeth Rosemond Taylor. I believe Aileen’s one on one approach in regards to helping the homeless, is the answer. 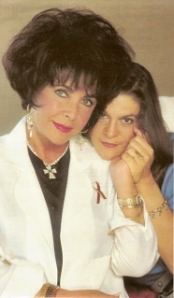 There’s not a whiff of wealth around Aileen Getty. Her fingers are circled not with diamonds but with intricate tattoos. She wears bright yellow sneakers and sanely-priced jeans. Her face is free of makeup, warm and welcoming.

Aileen Getty’s grandfather was the billionaire oil baron J. Paul Getty. But these days she has found richness in her life on the far margins of society. A former heroin and cocaine addict who has been living with AIDS for more than two decades, she has emerged as arguably the most influential friend and benefactor of the homeless of Hollywood.

During the past five years, Getty, 51, has quietly contributed millions of dollars to provide housing and food for Hollywood’s entrenched homeless population through her Gettlove organization and through gifts and loans to several other advocacy groups. By all accounts, she’s changed the landscape.

Getty says her own “inability to get well” has created in her a natural affinity with those struggling on the streets, most of whom are plagued by mental health and substance abuse problems.

“I’ve been an addict most of my life,” says Getty, who celebrated five years of sobriety on Valentine’s Day last month. “In my own journey, I really felt like I could either die or say, ‘Thank you and I’m sorry.’ I felt I had taken far more than I’d ever given. I didn’t want to go out that way…I rewrote my interior geography. That geography is now about others. ”

Gettlove, founded in 2005, has provided a variety of housing alternatives, depending on the needs of its clients. That includes refurbishing 30 rooms at two 1920s-era Hollywood hotels and lining up apartments for nearly two dozen homeless people in an aging Santa Monica Boulevard building. There, Gettlove staffers help tenants manage their finances and adjust to life with a roof.

Aileen GettyAt the same time, Getty individually has funded other organizations—Step Up On Second, PATH and Housing Works—to help them develop permanent housing for residents who simultaneously receive such services as health and mental health care. This month, Getty’s efforts led to her being honored as “woman of the year” for Supervisor Zev Yaroslavsky’s Third District.

Underlying all of Getty’s financial and logistical contributions is her core belief in the power of one-on-one relationships to, in her words, “rekindle the part of a human being that wants to find its best self.”

“Just because we’re housed doesn’t mean our spirit is comfortable,” says Getty, whose organization has taken clients on outings to, among other places, the L.A. County fair and the horse track.

Beyond housing, Gettlove serves hundreds of breakfasts and lunches each week at a social services agency founded by Blessed Sacrament Church in Hollywood. Gettlove shares the Selma Avenue building with several other homeless advocacy organizations, a reflection of the growing coordination among non-profits, business owners and government agencies to reduce homelessness in Los Angeles’ most famous neighborhood. A 2009 count by the Los Angeles Homeless Services Authority found more than 1,000 individuals living on the streets of greater Hollywood, half of them young people.

Gilbert Hotel, Los AngelesGetty can often be found at Blessed Sacrament’s social services facility spooning out food in the industrial-sized kitchen or mingling with clients in the dusty courtyard. Most have no clue about the family ties of the soft-spoken woman, who treats them as though they were her only family. But some have heard the buzz.

“I hear you’re one of the Gettys. Is that true?” they’ll ask. When Getty says yes, the matter quickly passes because her commitment to them has already become the defining characteristic of their relationship.

That said, Getty also knows her wealth is central to Gettlove’s effectiveness, giving her an edge over traditional service groups that must be accountable to the agencies that fund them. “I’m not dependent on anyone else’s expectations,” she says.

This extraordinary financial freedom allows Gettlove to experiment, to learn what works and then collaborate with government agencies to bring to life these “best practices” models.

Says Getty’s longtime friend and fellow Gettlove board member, John Ladner: “We’re taking advantage of our inexperience. We have the advantage of not too many set-in-stone obstacles.”

Looking ahead, Getty believes that providing homes to the homeless should not be embraced as an end in itself. “Nothing is solved,” she says, “unless we nurture a sense of community.” To that end, she envisions the development of community centers, where the homeless and the newly housed can gather during the day and enjoy the restorative powers that come with companionship and “a true sense of belonging.”

Among other things, she says these centers would offer everything from movies to gardening. “Someplace where people get to laugh,” Getty says—something that, these days, comes much easier in her own life. Says Getty: “I’ve become a more comfortable human being.”

Aileen Getty grew up in Europe and has spent most of her adult life in Los Angeles, CA. Over the past 25 years Aileen has brought her own experience with life’s challenges into her community by personally engaging her spirit, energy, knowledge, time and resources in the struggle against HIV/AIDS, substance abuse and addiction, mental illness and homelessness. Aileen’s affinity and compassion for individuals living in challenging circumstances is at the center of her life.

In 2005, Aileen founded Gettlove to acknowledge and house the numerous homeless individuals in the Hollywood community. On a daily basis Aileen continues her hands-on leadership of the organization as it embraces these homeless neighbors through personal relationships. Gettlove’s innovative and effective “companionship” approach to case management and counseling navigates the complexities of available services often too difficult for those chronically neglected, isolated, and ill to pursue on their own.

As a result of Gettlove’s efforts, by itself and in collaboration with other non-profit organizations and government agencies, an increasing number of individuals have moved from chronic homelessness into permanent housing. Aileen is a powerful partner and believer in the Hollywood community’s determination to create a future wherein all our neighbors have homes and continue to live in our midst with the peace and harmony only possible with the acceptance and love of an entire community towards all its members.

In addition to Gettlove, Aileen supports numerous projects throughout Los Angeles in order to facilitate and foster enhanced community. These include significant contributions to the acquisition and creation of public park space through the Trust for Public Land and the Hollywood Central Park. Aileen serves on various local nonprofit boards including Gettlove, the Center at Blessed Sacrament, the Kobe and Vanessa Bryant Family Foundation, and Step Up on Second. She is also an Ambassador to the Elizabeth Taylor AIDS Foundation.

It’s morning, and I’m not working right now.  So I ask myself, yoga, or feeding the homeless?  They both are at the same time.  This morning, it was clear.  So, I jumped in my car and drove over to the parking lot next to the Pantages Theater, in Los Angeles, on Hollywood Blvd., just a couple blocks east of Vine.  I arrive just before 9:00 am, and make my greetings to the smiling faces of other volunteers, many who are homeless people themselves, who have, through the services of Gett Love, an organization started by Aileen Getty, been given new opportunities for housing, jobs, and social services.
The line is already formed, halfway down the block.  In a few minutes, the white truck pulls up, usually driven by Tazee, a wonderful woman who works for the Gett Love program.  Every morning, she gets up at 5:45, and with some other helpers, makes sandwiches to serve 150-200 people.  When the truck pulls in, all hands reach for the plastic tubs that are hoisted over the side of the truck, and handed to those of us on sidewalk.
It’s all very well organized.  There are homeless people who have stepped into being of service, perhaps in exchange for community service benefits.  They make sure everyone in line is given a bag to collect their food.   They clean the streets after wards, and yell when a car comes around the corner to make sure everyone is safely out of the middle of the street.
It’s a unique set-up, certainly not a soup kitchen.  There are five parts to the food line.  First, each person is given a cup of juice.  Then they move onto the sandwich section.  There they are given a choice of as many as nine different sandwiches!  They are people; they get to choose what they want!  I like holding down the sandwich station, because that’s the first part of the line and I get to say, “Good morning.  What can I get for you?” and after they choose, “Have a great day!”  They get choices like turkey, ham, vegetarian, bean, tuna fish, hummus, chicken salad, Tuscan chicken, peanut butter and jelly, peanut butter and chocolate, peanut butter and honey and banana, roast beef, pastrami….YES, that many choices!
After they pass the sandwich part, they move onto fruit, where there are equally as many choices; each person gets to have one fruit, which might be a choice of banana, kiwi, strawberries, watermelon, pineapple, apple, or pear.  The next station is for a protein, where they get a hard boiled egg, or yogurt or cheese stick.  Sometimes there is also a dessert offered, like a cookie or sweet roll or brownie.  They then can move over to the other side, where there is a coffee station.  Additionally, there is a section set up just for handicapped people, who receive their food more easily.
There is a man named Sonny who I see some of them talking to.  Sonny, I believe, helps them find jobs and offers community service opportunites.  Sonny works with Aileen Getty, the founder of this program, which is called “Gett Love.”
This morning, I was driven to tears when a man showed up, the last man to arrive, and he had no shoes and was barefoot.  Tazee, bless her heart, asked him what size he wears.  He said, “A size 12.”  Well, Tazee just happened to have a size 12, brand new pair of black sneakers in the back of the truck.  I looked at her and said, “How did you do that?” and Tazee just smiled and pointed to the sky!  She told me it happens all the time, that people show up needing something, and she just happens to have that exact thing.
As the man was lacing up the brand new, black sneakers against a new pair of white socks, I had tears in my eyes.  What they are doing there, at that street corner, every Monday through Friday, is a wonderful service to people who all have a story that I will never know, but somehow, they ended up in that line.  We treat them like human beings, and perhaps they will gain a little more dignity.
The web site for this program is http://www.gettlove.org.  If anyone out there lives in LA and would like to come and serve the homeless, just show up at the Pantages Theater parking lot on Hollywood near Vine, a little before 9 am.  All are welcome to serve, and it’s fun and easy.  By 9:45, the street is being cleared, and it’s all done, so it’s a short commitment of service.

Thank you to the Gett Love organization, for all they are doing, and special thanks to Aileen, Sonny, Tazee, Cindy,Tina, Doug and Freddie who are committed to being of service to this program every day.