Married to the Priory De Sion 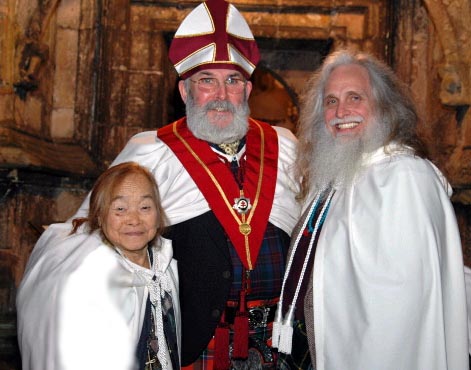 If you must know, dear reader, I have proposed marriage to Belle Burch in the last twenty-four hours, because I was correct, this is the person I deserve to spend the rest of my life with (beginning in 1965) because we had so much fun together in the two hours we went on a cultural journey in Bohemiaville. Belle has a highly developed sense of humor and can grasp irony with the best of them. We took turns naming things in the world we love, and gave each other a half dozen high-fives! I love looking at Belle. She has the most beautiful hands I have ever seen. She can make a living as a hand model. When she made the motion of a woman holding a invisible rose, I creamed my artistic pants. Belle gave one artistic orgasm after another. There was no end to her good questions that I went into great depth, with true love for the truth, to answer. We were having Knowledge Fest, that we knew she was not getting at home, with your know who!

Outside the Wandering Goat, Belle was about to get on Bluebelle when I begged her to let me take some shots for our portrait. She gave me a straight look and said;

“You’re acting like you are never going to see me again. Don’t worry. You will!”

Belle did not know, like I know, that my search and love for the truth has always gotten me into deep trouble, and put end to many a loving bond because of a lack of honesty.

Ten minutes ago I recall “why John Ambrose”. I had been evicted from the Priory de Sion yahoogroups after I accused Steve Mizrach of stealing my “rose line” trail I was on in 1998, and, I argued with Bill Arney about Napoleon marrying a Merovingian. He got it wrong. Bill is a hot shot Mason in SF.

After quitting EFN I got a yahoo e-mail in the name John Ambrose. This did not get me covertly back into the bosom of the Freemasons and the Knights Templars. I then joined another group, and argued with Ian Sinclair who got me evicted from another Templar group.

So, there it is my dear Belle (if your are lurking about) my Nom de plume, because they were stealing my rosy secrets – bastards! They hated my study on Belle Rosamonde, the Fair Beauty of the Labyrinth.

Below is a argument I had with Graham Hancock and Paula Styles who is my friend on Facebook, I inviting her under the name Greg Presco, so she didn’t recognize. Paula invites to play Farmville once a week.

Paul Smith debunked the whole Priory de Sion, and is the rude one. I am the nutty one. While I am being attacked and banned by fake Templars, my sister’s legacy is falling into the hands of outsiders. Group members, who claim all famous art comes from secret members of the Priory de Sion, made a special ruling in regards to Christ-ine Rosamond being a world famous female artist, who MIGHT be kin to Mary Magadlane, because her grandmother is Mary Magdalene Rosamond?

“You mean, she’s not even a contender?”

Many if these people were working on books, include Dan Brown and his wife who were lurking about.

Below is the mock-up of the name ROSAMOND and AMBROSE that I filed in Rosamond’s Probate.

‘The Real Most Interesting Sober Man in the World’

It’s Belle. Still wondering if you’re real. Thank you again for the bike. Let’s set up a time for me to do some modeling. Thurs and Fri are possibilities for me.
By the way, Why “John Ambrose”? Is that your middle name? Nom de plume? Highly synchronistic, as my current partner’s legal first name is Ambrose. I’m very curious about this.

Here’s the poem I said I’d send you.
Haven’t read any of your emails yet, will get to that soon.

Fwd: RE: Paula Stiles .- To The Moderator.

Nutiness, Frank! Have you read my posts today? Where are your posts –
on topic? You don’t contribute to this group, You just complain
and whine about what others post. This is a kangaroo court convened
to protect the status quo – who can’t stand the questioning!

Paul Smith has debunked much of the nutiness you have subscribed to,
and now you call for him to be censored. Shame on you!

How is it you respond to posts before they put up on the group?

TSJ <tsj t…> wrote:
I agree – the stuff that isn’t plain nasty by one is pure nutiness
by the
other.

Andrew,
Paula makes some very valid observations, I believe that now is the
time to
put an end to this destruction, and only you can do this.
If the list continues in the same vane much longer there will be no
seriously interested people around to support the great work you
have done
in setting up this site. Like most people who have become sick and
fed up
with the constant insults to other researchers, I contact others
directly
either by private email or telephone, therefore the list misses out
on some
interesting research and points of view, but at least there is no
verbal
abuse.
Yours aye
Ian Sinclair of Noss Head

> Well, mainly, because the bald-faced lies and the slander get very
> tiresome. And they don’t stop regardless of whether I post or don’t
> post or reply or don’t reply. They just keep going, because
clearly,
> I’ve hit a nerve. It’s mainly, I think, because I’m what these two
> bozos pretend to be–a genuine expert on the subject–and just by
> posting things, regardless of whether or not I engage them, I make
> them look bad. And since Andrew clearly can’t be bothered to do
> anything about them, I guess I have to just wade in there and
refute
> their nonsense, point by point, until they shut up. They are too
> intimidating to the newbies to be allowed to continue unchallenged.
>
> I can tell you one thing–the only reason you have me here is
> because I’ve been on since ’98, I’ve got a very thick skin and I’m
> too stubborn to leave. Plus, there are people here, like you, with
> whom I’ve had some useful, pleasant discussions. Unfortunately, we
> are very unlikely to get any other academic experts besides the
ones
> we have now. I’m not trying to read the minds of any of my
> colleagues. I just don’t see how I could possibly recommend this
> list to them. There is no way that they would put up with any of
> this and that’s a shame. Because they could be quite useful to this
> list and it could be useful to them.
>
> It is a great shame that we have two people here who make the list
> so hostile to anything remotely friendly or cooperative in the way
> of discussion. Unless the moderator boots them or unless they
choose
> to leave (the latter option being unlikely, since they both thrive
> on instilling chaos and bullying others), we are stuck with this
> problem. Ignoring it won’t make it go away. That, unfortunately,
has
> become all too clear in the past few months.
>
> Paula
>
>
> — In templars yahoogroups.com, “Graham” <widowsson b…> wrote:
>>
>> Paula,
>>
>> I don’t know why you dignify Paul by actually replying to his
> insults, they
>> aren’t worth the bandwidth downloading.
>>
>> Graham

“As a coincidence, my father’s mother’s maiden name, BRODERICK, also mean AMBROSE, a name that is said to stem from RHYDDERICK and means “son of Rhydderick”. WITZ means “son of”. Rhydderick Hael is King Arthur’s sword  his RHODEMUND. My mother, ROSEMARY ROSAMOND, fell in love with a man born of TWO AMBROSES. Her grandfather, WILIAM ROSAMOND, married a woman surnamed ROSE. In theory, my father could have taken the name ROSEMOND, or ROSEMAN, denoting a man who married a woman named ROSE.

My mother was a double ROSE. A man can also be called ROSEMARY for the same reason. The name BROSEMAN is a form of AMBROSE, as is the name BRAOSE, also BRUS. Both spelling contain a rose. Robert Bruce of Brambler is the BRIAR ROSE. Fair Rosamond has been compared to `Sleeping Beauty’ and was titled a Magdalene. Royal’s wife was MARY MAGDALENE ROSAMOND. I have found a Welsh King named ROSE MARY. He is the father of the TUDOR ROSE. My great grandfather was WENSEL ANTON BRASKEWITZ, and married MARIE ROTH, another Rosemary, as Rothis a Rose name.
There is the name EVEREUX, also EVEROSE a named thatstems from the winged Goddess, Nike of EVROS. We might be looking atthe secret name of the Plantagenent family, and the origin of the surname PRESCOTE, as the first high king of England was AMBROSIUS AURELIUS, a Roman. My brother was named after Marcus. As a boy, MERLIN was name AMBROSIUS. This magician was a Foundling, meaning “unfathered birth” Dionysus, Llew Llew, Taliesin, and Moses `The Rose of Sharon’ were Foundlings and `Outcasts’. Both books of the Bible are based upon the story of `The Prodigal Son’ who, once lost, is now found  even AROSE from the dead.”

Where does the term “roseline” come from, as applied to the zero meridian, in the “peedox”? We are given one answer, in a kind of pun, in that St. Roseline of Villeneuve has her feast day on January 17th. Dan “Beige” (I kind of like that!) tells the world it comes from Rosslyn, except, no, it doesn’t, and Rosslyn (Roslin) Chapel isn’t on the French zero meridian in any case. However, there is an interesting town that is on the zero meridian, named Rodez. It has a cathedral dedicated to Our Lady of the Roses, and is built of pink (rose) sandstone
.
http://en.wikipedia.org/wiki/Rodez_Cathedral

Now, the name of the town is interesting. It (first Segdonum, then Ruthenium) is supposedly named after the Celtic Rutheni/Rhedoni, whose name literally means “rose people”, after the reddish color of their hair. (“Ruthenian” is also originally the name of the Russian Slavic people, too, but in exploring this side tangent I’ve only encountered perplexities, so I haven’t pursued it.) But on a 15th century map I once was perusing over I saw something else weird: the name of the town written as “Rhodes”. Now, there is something else weird going on here. It seems that there were two Greek colonist populations that originally settled in Celtic Gaul: the Phocaians/Massalians (who gave their name to Massalia/Marseilles) and the Rhodians, from the isle of Rhodes. The island of Rhodes was named after the Greek rose-goddess, Rhoda, her name literally means “Rose” (she was a nymph-daughter of Poseidon). It also had its own zero meridian; the astronomer Hipparchus proposed one going through the island. We know for sure there is another colony of theirs in Spain (Catalonia), today known as Rosas, but once known as Rhode. And it is also said they had a colony named Rhodanousia in Gaul.

How interesting that the name of the Rhone originally was apparently Rhodanos. There are some who suggest this may be a hint of the Rhodian presence as well. What relation did the Greek Rhodian colonists have with the Celtic Gauls? Did interaction and intermarriage result in the “Rutheni” people? Could they have given their name to the “rose – line”? BTW, one final strange loop: Rhoda was supposed to be the bride of the sun-god Helios; St. Roseline’s brother Helion was the GM of the Knights Hospitaller.

1 Response to Married to the Priory De Sion