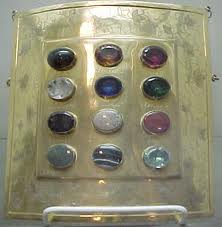 I have a theory the Ark carried a crystal solar orb that omitted a powerful light after being exposed to the sun. Moses and Aaron were Egyptian Artisans who led a revolt amongst the Jewish people who were making pyramids. The ephod had jewels upon it that were laid over this orb and broadcast a solar system inside the Kings Chamber. This is the Thummim and the Urim. These jewels were not set in a square pattern. When laid over a sphere, these lights were broadcast in all directions. This is why there was a portable tent (tabernacle) and why the Holy of Holies was pitch dark.

Thummim (תוּמִים) is widely considered to be derived from the consonantal root תתּוּמִים (t-m-m), meaning innocent,[1][2][3] while Urim (אוּרִים) has traditionally been taken to derive from a root meaning lights;[

An ephod (Hebrew אֵפוֹד) (/ˈɛfɒd/ or /ˈiːfɒd/) was an article of clothing, and an object of worship in ancient Israelite culture, and was closely connected with oracular practices and priestly ritual.

In the Books of Samuel, David is described as wearing an ephod when dancing in the presence of the Ark of the Covenant (2 Samuel 6:14) and one is described as standing in the sanctuary at Nob, with a sword behind it (1 Samuel 21:9). In the book of Exodus and in Leviticus one is described as being created for the Jewish High Priest to wear as part of his official vestments (Exodus 28:4+, 29:5, 39:2+; Leviticus 8:7).

In the Book of Judges, Gideon and Micah each cast one from a metal, and Gideon’s was worshipped (Judges 8:26-27, Judges 17:5).
Thummim (תוּמִים) is widely considered to be derived from the consonantal root תתּוּמִים (t-m-m), meaning innocent,[1][2][3] while Urim (אוּרִים) has traditionally been taken to derive from a root meaning lights;[
4] these derivations are reflected in the Neqqudot of the masoretic text.[3] In consequence, Urim and Thummim has traditionally been translated as lights and perfections (by Theodotion, for example), or, by taking the phrase allegorically, as meaning revelation and truth, or doctrine and truth (it appears in this form in the Vulgate, in the writing of Jerome, and in the Hexapla).[2]

However, although at face value the words are plural, the context suggests they are pluralis intensivus – singular words which are pluralised to enhance their apparent majesty.[2] The singular forms – ur and tumm – have been connected by some early scholars with the Babylonian terms urtu and tamitu, meaning oracle and command, respectively.[2] Many scholars now believe that אוּרִים (Urim) simply derives from the Hebrew term אּרּרִים (Arrim), meaning curses, and thus that Urim and Thummim essentially means cursed or faultless, in reference to the deity’s view of an accused—in other words Urim and Thummim were used to answer the question innocent or guilty.[1][3]

1 Samuel 14:41 is regarded by biblical scholars as key to understanding the Urim and Thummim;[2] the passage describes an attempt to identify a sinner via divination, by repeatedly splitting the people into two groups and identifying which group contains the sinner. In the version of this passage in the Masoretic text, it describes Saul and Jonathan being separated from the rest of the people, and lots being cast between them; the Septuagint version, however, states that Urim would indicate Saul and Jonathan, while Thummim would indicate the people. In the Septuagint, a previous verse[5] uses a phrase which is usually translated as inquired of God, which is significant as the grammatical form of the Hebrew implies that the inquiry was performed by objects being manipulated; scholars view it as evident from these verses and versions that cleromancy was involved, and that Urim and Thummim were the names of the objects being cast.[3][disputed – discuss]

The description of the clothing of the Hebrew high priest in the Book of Exodus portrays the Urim and Thummim as being put into the sacred breastplate, worn by the high priest over the Ephod.[6] Where the Scripture elsewhere describes an Ephod being used for divination, scholars presume that it is referring to use of the Urim and Thummim in conjunction with the Ephod, as this seems to be intimately connected with it;[2] similarly where non-prophets are portrayed as asking HaShem for guidance, and the advice isn’t described as given by visions, scholars think that Urim and Thummim were the medium implied.[3] In all but two cases (1 Samuel 10:22 and 2 Samuel 5:23), the question is one which is effectively answered by a simple yes or no;[3] a number of scholars believe that the two exceptions to this pattern, which give more complex answers, were originally also just sequences of yes/no questions, but became corrupted by later editing.[3]

There is no description of the form of the Urim and Thummim in the passage describing the high priest’s vestments, and a number of scholars believe that the author of the passage, which textual scholars attribute to the priestly source, wasn’t actually entirely aware of what they were either.[3] Nevertheless, the passage does describe them as being put into the breastplate, which scholars think implies they were objects put into some sort of pouch within it, and then, while out of view, one (or one side, if the Urim and Thummim was a single object) was chosen by touch and withdrawn or thrown out;[3] since the Urim and Thummim were put inside this pouch, they were presumably small and fairly flat, and were possibly tablets of wood or of bone.[3] With the view of scholars that Urim essentially means guilty and Thummim essentially means innocent, this would imply that the purpose of the Urim and Thummim was an ordeal to confirm or deny suspected guilt; if the Urim was selected it meant guilt, while selection of the Thummim would mean innocence.

Within the Bible, in the contexts where it is worn, the ephod is usually described as being linen, but did not constitute complete clothing of any kind, as the Books of Samuel describe David’s wife Michal as taunting him for indecently exposing himself by wearing one.[1] Though some Bible translations insert the word “only” before ephod (inferring David was indecent), the book of 1 Chronicles states that David was “clothed with a robe of fine linen, as were all the Levites who bore the ark… [and] David also wore an ephod of linen,” [NAS Bible translation; 1 Chronicles, 15:27] “and David was wearing a linen ephod” [NAS Bible translation; 2 Samuel, 6:14]. There appears to have been a strong religious and ceremonial implication to wearing an ephod, since the 85 priests at Nob are specifically identified as being the type of people who wore an ephod;[2] though the Masoretic text here describes them as being linen ephods (1 Samuel 22:18) the word linen is not present in the Septuagint version of the passage, nor is it present when the Septuagint describes David and Samuel as girding themselves with an ephod. Therefore, some textual scholars regard its presence in the Masoretic text as a later editorial gloss.[2]

A passage in the Book of Exodus describes the Ephod as an elaborate garment worn by the high priest, and upon which the Hoshen, or breastplate containing Urim and Thummim, rested. According to this description, the Ephod was woven out of gold, blue, purple, and scarlet threads, was made of fine linen, and was embroidered with skillful work in gold thread (Exodus 28:6-14) the Talmud argues that each of the textures was combined in six threads with a seventh of gold leaf, making 28 threads to the texture in total.[3]

The Biblical description continues without describing the shape or length of the ephod, except by stating that it was held together by a girdle, and had two shoulder straps which were fastened to the front of the ephod by golden rings, to which the breastplate was attached by golden chains (Exodus 28:6-14) from this description it appears to have been something like a minimalist apron or skirt with braces,[1] though Rashi argued that it was like a woman’s riding girdle.[2] The biblical description also adds that there were two engraved gems over the shoulder straps (like epaulettes), made from shoham (thought by scholars to mean malachite,[2][4] by Jewish tradition to mean heliodor,[2] and in the King James Version is translated as “onyx”), and with the names of the 12 tribes written upon them; the classical rabbinical sources differ as to the order in which the tribes were named on the jewels (Sotah 36a).

Textual scholars attribute the description of the Ephod in Exodus to the priestly source and to a date later than the other mentions of Ephod;[5] biblical scholars believe that the Ephod may have evolved over time into this highly ceremonial form from more primitive beginnings (the simple linen form described in the Books of Samuel), much like the manner in which the highly liturgical maniple evolved from an ordinary handkerchief.[1]

Besides use as a garment, an Ephod was also used for oracular purposes, in conjunction with Urim and Thummim;[6] the books of Samuel imply that whenever Saul or David wished to question God via oracular methods, they asked a priest for the ephod.[6] Since the oracular process is considered by scholars to have been one of cleromancy, with the Urim and Thummim being the objects which were drawn as lots, the Ephod is considered by scholars to have been some form of container for the Urim and Thummim;[2][6] to harmonise this with the descriptions of the Ephod as a garment, it is necessary to conclude that the Ephod must have originally been some sort of pocket, which the priests girded to themselves.[1][2] However, the biblical text states the Urim and Thummim were placed in the breastplate, not the ephod (Leviticus 8:8). The integration of the stones in the breastplate, as well as the Hebrew usage of “Urim” as “lights,” suggest that the Urim and Thummim may have been a type of ocular device through which the priest would look when receiving divine communication.[7]

The object at Nob, which must have been somewhat freestanding since another object is kept behind it, and the objects made by Gideon and by Micah, from molten gold, logically cannot have just been garments.[1][2] The object made by Gideon is plainly described as having been worshipped, and therefore the idol of some deity (possibly of Yahweh), while the object made by Micah is closely associated with a Teraphim, and the Ephod and Teraphim are described interchangeably with the Hebrew terms pesel and massekah, meaning graven image, and molten image, respectively.[1][2]

Even the ephods used for oracular purposes were not necessarily just pieces of cloth, as they are not described as being worn, but carried (though some translations render 1 Samuel 2:28 as wear an ephod rather than carry an ephod[5]); the Hebrew term used in these passages for carry is nasa, which specifically implies that the Ephod was carried either in the hand or on the shoulder.[2] The conclusion thus is that Ephod, in these cases, referred to a portable idol, which the lots were cast in front of;[1][2] some scholars have suggested that the connection between the idol and the garment is that the idol was originally clothed in a linen garment, and the term Ephod gradually came to describe the idol as a whole.[2]

Other scholars[who?] suggest that the ephod originally refers to a container for the stones used to cast lots and later became associated with many objects that also could contain the stones or were used in divination.

According to the Talmud, the wearing of the ephod atoned for the sin of idolatry on the part of the Children of Israel.[8]