Rose of the World and European Union 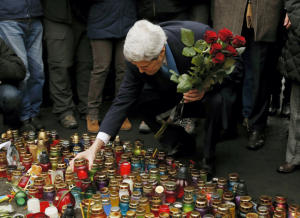 “As a result, no matter how nondogmatic the Rose of the World’s teachings will be, no matter how much they will be permeated by a spirit of religious dynamism, a great many people will have difficulty accepting them. On the other hand, many millions will respond to its call, as it will be addressed not so much to the intellect as to the heart, resounding in masterpieces of literature, music, theater, and architecture.
Works of art are more capacious and multifaceted than theosophical aphorisms or philosophical arguments. They leave more room for the imagination; they permit each person to interpret the teaching so that it is more understandable and in tune with his or her own individuality. Revelation flows down from many streams, and if art is not the purest then it is at least the widest of them. Therefore, every art form and a beautiful repertoire of ritual will outfit the Rose of the World with colorful and glittering habiliments. And for that same reason, it would be most natural for a person who possesses three of the greatest gifts—religious vision, sanctity, and artistic genius—to stand at the head of the Rose of the World.

Perhaps such a person will never come, or will come much later. It is possible that a collective of the worthiest, and not one single person, will lead the Rose of the World. But if Providence sends a person of such great spirit to our century—and it has sent them before—and the forces of evil are unable to thwart his or her mission, it will be the greatest of good fortune for the entire planet. For no one can exert a greater and brighter influence on humanity than a genius of the word who has become a visionary leader and living saint and who has been raised to the heights of being global guide of a cultural and social renaissance. That person, and only that person, can be entrusted with an extraordinary and unprecedented task: moral supervision of all the states of the Federation and guidance of nations with a view to transforming those states into a global community.
O, we Russians paid dearly for the unconditional trust we placed in a strong-willed man, whom many of us viewed as a benefactor of humanity. We will not repeat the same mistake! There are unmistakable signs that distinguish a person worthy of such a mission from an evil genius. The latter is gloomy; the former is bright with spiritual vitality. One consolidates power with executions and torture; the other will not spend a single day seeking power, and when that individual accepts power no one’s blood will be spilled. One will cultivate the cult of personality across the land; the other will consider such glorification ridiculous and repellent. One is unapproachable; the other is open to all. One is wracked by an unquenchable thirst for life and power and hides from imagined dangers behind impenetrable walls; the other is free from worldly temptations and calm in the face of danger, with a clean conscience and unshakable faith. They are two antipodes, the ambassadors of two irreconcilable camps.

MOSCOW — As a counterweight to the European Union, Russia’s Vladimir Putin is pursuing an ambitious dream rooted in memories of Soviet glory: The Eurasian Union.
It’s a strategy to pull former Soviet satellite states back into Moscow’s orbit through a combination of incentives and threats. And embattled Ukraine, a huge country of 46 million people, has lain at the center of the game-plan.

Putin has put Eurasian Union at the top of his presidential agenda, voicing hope that the new grouping could become a major economic powerhouse on par with the EU. He has sought to lure ex-Soviet nations with cheap energy and loans, while also expanding his military presence in these countries whenever he can.
Russia’s offer of $15 billion to make Ukraine drop a trade accord with the EU was a carrot in Putin’s Eurasia program. His deployment of troops to takeover Crimea is a stick.
Here is a look at how Russia has fared in bringing other former Soviet neighbors under its thumb:
IN PUTIN’S POCKET
Putin understands that it’s not just military might that matters in winning allies. Cash counts, too.
He formed an economic bloc with Belarus and Kazakhstan in 2010 with a goal to bolster mutual trade through the removal of customs barriers. Armenia and Kyrgyzstan also want to join, and Tajikistan could be on membership track, too.
This Customs Union is the basis for the Eurasian Union, a more ambitious economic bloc set to be formed in 2015.
Belarus, led by authoritarian President Alexander Lukashenko — dubbed “Europe’s last dictator” — has been Russia’s closest ally. Lukashenko has kept most of the economy in state hands and depended on cheap energy supplies and loans from Russia to keep it running. Belarus also has been an important military partner, hosting Russian military facilities and conducting joint maneuvers with Russian forces.

1 Response to Rose of the World and European Union