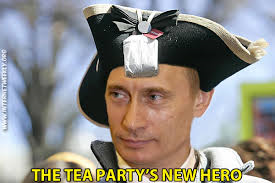 When the Christniks led by Cruz shut down our government, Putin offered to come to America and speak to the American people. I suspect the Christian-right has been sending Putin signals they support him. I am going to write my congressman and demand an investigation.

The Prophecy buffs for years said that Russia is Gog and Magog. And while they had such discussions during the cold war, Russia left communism, then the buffs wrote all sorts of conspiracy theories on the KGB and how they will revert back to communism. Yet Russia has become the only superpower nation which is reverting back to Christianity while Europe and the U.S. are falling away.

­From a biblical perspective, Russia is against the spirit of antichrist while the U.S. is advancing its cause.

MOSCOW — At the height of the Cold War, it was common for American conservatives to label the officially atheist Soviet Union a “godless nation.”
More than two decades on, history has come full circle, as the Kremlin and its allies in the Russian Orthodox Church hurl the same allegation at the West.
PHOTOS: Top 10 handguns in the U.S.
“Many Euro-Atlantic countries have moved away from their roots, including Christian values,” Russian President Vladimir Putin said in a recent keynote speech. “Policies are being pursued that place on the same level a multi-child family and a same-sex partnership, a faith in God and a belief in Satan. This is the path to degradation.”
In his state of the nation address in mid-December, Mr. Putin also portrayed Russia as a staunch defender of “traditional values” against what he depicted as the morally bankrupt West. Social and religious conservatism, the former KGB officer insisted, is the only way to prevent the world from slipping into “chaotic darkness.”
As part of this defense of “Christian values,” Russia has adopted a law banning “homosexual propaganda” and another that makes it a criminal offense to “insult” the religious sensibilities of believers.

See this? This is how a real man leads. I wish to fuck Putin would come here and run for President. This may be the guy who saves western civilization.

Vlad Putin 2016!
I think he could win!
Vlad is more trusted and better liked by AMERIKANS than Obummer!
Vlad is even better liked than Hillary or any one we have to nominate!

A Russian pensioner couple may be in trouble for criticising the country’s powerful Orthodox Church seven years ago, reports say.

Officials in Sverdlovsk have launched an investigation into Petr Tkalich, 64, and Olga, 55, both members of the evangelical Protestant Pentecostal movement, under legislation banning “incitement to religious strife”. In two short blog posts in 2006, Petr allegedly accused the Russian Orthodox Church of being sectarian and tolerating anti-Semitism among its followers. Perhaps even more risky were his harsh words for Russia’s leaders, whom he dubbed “servants of the antichrist”. After a visit by the FSB, Russia’s internal security service, the liberal Gazeta newspaper reported Olga as saying: “They told us that if we don’t like the motherland, we should leave.”

The Orthodox Church has grown in influence under President Vladimir Putin, whose government has presented itself as its defender. Last year, two members of the feminist punk band Pussy Riot were jailed on charges of “hooliganism motivated by religious hatred” after performing an anti-Putin “prayer” in Moscow’s main Orthodox cathedral. A new law signed by Putin in July introduced prison terms for “insulting religious convictions and the feelings of believers”.

Meet the man who not only would like to lead Moscow in battle against Satan, but would also like to give women two days leave from work every month during menstruation.

For Degtyarev, the battle between good and evil is one that plays out in intensely nationalist terms. “I can say as a believer that I believe in the apocalypse from the point of view of faith. And I think we must prepare,” Degtyarev said on Friday. “I believe that we’ll defeat the Antichrist — I’m sure of it — and that Russia will lead the fight against the Antichrist.”

But Degtyarev has no patience for the portended apocalypses of other religions. Late last year, he launched a campaign to stop Russian media from reporting on the possibility that the end of the Mayan calendar foretold the end of the world. “In our compatriots’ interests, we ask you to pay attention to the dissemination of pseudo-scientific information about the end of the world in your media,” he said in addressing the coverage.

Incidentally, Degtyarev serves as the deputy head of the science and technology committee in the Duma.

But Degtyarev isn’t just a kooky crusader for Christ. He’s perhaps best known for his initiative to give women paid leave during menstruation. Last month, he introduced a bill in the Duma that would require employers to provide their female employees two days off every month during what he called their “critical days.”

“In this period, the majority of women experience psychological and physical discomfort,” Degtyarev said at the time. “Often the pain for the fair sex is so intense that they are forced to call an ambulance.”

The language of that legislation reads like something of an homage to male condescension: “Strong pain induces heightened fatigue, reduces memory and work-competence and leads to colorful expressions of emotional discomfort. Therefore scientists and gynecologists look on difficult menstruation not only as a medical, but also a social problem.”

Degtyarev’s nationalism was on full display earlier this week during a visit to a traditional Russian bath house, where he made a shirtless appearance before the cameras clad only in a towel and a traditional Russian hat. In an interview, which you can view below, he declared that when the plague struck Europe, Russians were largely immune to the effects of the disease because of the restorative properties of the banya. Such are the powers, Degtyarev claims, of traditional Russian culture.