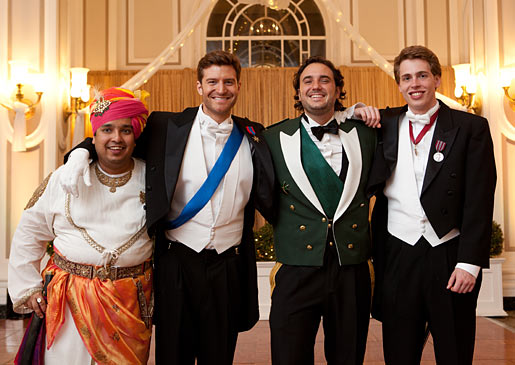 I have fired my family and now two friends because they want me to do nothing – but fail. Good riddance!

Three days ago I discovered there is a T.V. show about Princes dating Midwest Cowgirls and Southern Belles! They are doing this blog, and my novel ‘Capturing Beauty’.

In e-mails Mark Gall told me I was not invited to Jonny Gall’s memorial because I would bore his OTHER friends with my talk about genealogies. Mark has a Jewish Cabal of film buffs who think they are Argo. They meet to talk about films they have seen. They think they are hot-shit. Mark has no perception or insight on anything. But, because he contributes money to these buffs, they hang on his every word, and kiss his ass!

I talked with Mark Gall about turning my blog into a reality show and he treated me like I was deluded and insane. He declined to serve as my second named Trustee.

Here is a Prince kin to my fiancé!

Francisco de Borbón – 33 years old. Direct descendent of German and Spanish royalty. Son of the Duke of Seville and great-great-great grandson of the 1st Duke of Seville (who was the grandson of Charles IV of Spain).
Secret Princes is an American reality television series that debuted September 21, 2012, on TLC.[1] It chronicles the adventures of four members of international nobility as they leave their countries to live, work and look for love in America.[2] In addition, to guarantee that they are loved for their true selves and not due to their wealth or status, they go undercover as ordinary locals in Atlanta, Georgia during the first season and Austin, Texas in the second season. The second season premiered on October 25, 2013.[3]

Production crews follow participants as they embark on a journey to achieve their fairy tale romance while embracing American culture in Atlanta. During their pursuit of love, they are forced to leave behind their team of butlers and learn to cook, clean and shop for themselves. They accomplish this by taking jobs such as busboys, waiters and dog groomers. Even more revealing is their struggles to accommodate to the working American culture. They take these measures in order to adapt and find the perfect woman for them.

Season 1[edit]
Prince Salauddin Babi of India – 32 years old.[4] Resides in Gujarat, India. Parents have begun the arranged marriage process. Prince Salauddin chose a lawyer named Alison Langley and invited her to India after revealing his identity; they decided not to continue their relationship.
Lord Robert Jonathan Walters – 31 years old.[5] Resides in London, England. Lord of the Manor of Fullwood (inherited from his uncle).[6] Original holder of his title was King Henry VIII. Lord Rob met Jasmine Bishop, a pharmaceutical sales rep, early on. They bonded over Shakespeare and swimming together with whale sharks at the Georgia Aquarium. He also met a dolphin trainer named Molly and went on two dates with her. In the end he chose to reveal his true identity to Jasmine and invited her to his family’s villa in Marbella, Spain where she met his step-brother. In the end, Lord Rob asked Jasmine to extend her stay in Europe. Rob said that because of Jasmine he had even more of a reason to move to America and couldn’t wait to visit her home and family in Andalusia, Alabama. The couple decided to continue their relationship.
The Honourable Ludovic Watson – 22 Years old. Resides in Yorkshire, England. Son of the Baron Manton, Lord Miles Watson, but has an older brother and is therefore not the heir apparent (meaning he is not likely to become the next Baron). Relative of Marmaduke Langdale, 1st Baron Langdale of Holme;[7] Houghton Hall, his current residence, was the seat of the (now extinct) barony of Langdale. Ludovic met Melissa Braden at a nail salon and decided to reveal his title to her at the ball. She visited him in London where she and his friends did not get along. Melissa told him that they were not a match, and they did not continue their relationship.

Francisco de Borbón – 33 years old. Direct descendent of German and Spanish royalty. Son of the Duke of Seville and great-great-great grandson of the 1st Duke of Seville (who was the grandson of Charles IV of Spain). Son of the Countess of Hardenberg, whose family tree includes Karl August von Hardenberg, a Prime Minister of Prussia. Francisco met a single mother named Camille Morone. They went to the zoo and a romantic picnic before he decided to invite her to the ball to reveal his title. She joined him in Spain where she met his mother. The couple decided they wanted to see each other again.

Season 2[edit]
Prince Alexander of Russia[3] – 34 years old. Direct descendent of the House of Romanov. Has a career as a photographer and lives in Kent, England.

Prince Lorenzo de Medici of Italy[3] – 37 years old. Heir to the famous House of Medici. Has Polish and Italian royal bloodlines.
Lord James Rennell of Rodd[3] – 34 years old. 4th Baron Rennell in the United Kingdom, which was inherited in 2006 from his uncle. Works for an event planning company.

Honourable Oliver Plunkett of Dunsany[3] – 28 years old. Heir to the Barony of Dunsany Republic of Ireland. Resides in the 900 year old Dunsany Castle and Demesne. Owner of computer gaming company.

5
5 “Happily Ever After?” October 19, 2012 1.85[12]
All four Princes ask a girl to the ball, and each girl accepts the invitation to be a part of the Princes’ regular lives; without being disappointed, or angry, about the Princes’ choice to hide their identities. However, only two of the Princes were successful in their endeavour. The Hon Ludovick Watson (Waldo of England) and Melissa: Melissa admitted that she felt uncomfortable as a middle-class girl, and that she is disappointed with the “lack of work, and ideas” of Waldo; whilst he decided that he wasn’t ready for a serious relationship. Prince Salauddin Babi (Sal of India) and Alison: Alison felt uncomfortable with Sali’s family’s thoughts, and that she was not ready for the relationship, whereas he quickly stated that he was in love with her. Lord Robert Walters of the UK (Tate) and Jasmine: Tate didn’t take her to his home in the UK, because Jasmine’s dream was to go to Spain. As a result, he chose to locate his family’s holiday home there. He asked her to go on a date with him again, and to stay for a few more days, and she accepted his invitation. Prince Francisco de Borbon (Cisco of Spain) and Camille: Before the ball started, she said that “he’s totally hot, and he treats me like a freakin queen”. She accepted his invitation to Spain. After her visit to Madrid, Cisco told Camille that he wants to see her again, and that he hopes their relationship works, which she agreed with.