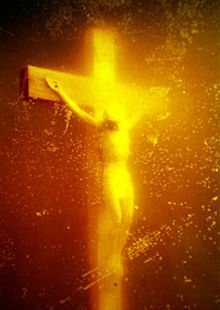 Evangelicals are zombies For Jesus who feed on Secular Sins. Without Sin and Sinners in the world, they would wither and die.

Insane ministers are going after THE ARTS, and the National endowment of the Arts because they offer an alternative to Jesus – who has all the answers! The church has become a dark bar full of drunks who are rooting for Team Jesus, who takes on everything that is not – OF JESUS!

Piss Jesus was a windfall for evangelical missionaries in America, as was Bill Clinton’s naughty penis. These insane religious addicts worship Sin and Sinners – pray they will sin some more so they will prosper. The real Jesus hated these self-righteous vampires, and tried to destroy them, drive a stake through their heart.

Secular humanists should be on guard about a new book, Mind Siege: The Battle for Truth in the New Millennium, by Tim LaHaye and David Noebel. This book is a call to arms of evangelical Christians against secular humanism and Paul Kurtz, in particular.
The main theses of LaHaye and Noebel are that secular humanism is a “religion” and that the secular humanist ideology dominates all of the major institutions of American life—including the American Civil Liberties Union, the National Organization for Women, the National Endowment for the Arts, the major television networks, the major foundations (Ford, Rockefeller, MacArthur), the National Council of Churches, the liberal wing of the Democratic Party, the United Nations, Harvard, Yale, and 2,000 other colleges and universities.
They also allege that secular humanists have “undermined the moral fabric of America” and that evangelical Christians (80 million strong) need to gear up for an all-out battle to root secular humanists out of public life and political office.
The book repeats the litany of libelous charges against secular humanism first made by LaHaye in his earlier 1980 book, Battle for the Mind. The book was influential in initiating a major fusillade against secular humanists. It helped galvanize both religious and political opposition to secular humanism during the early Reagan years. The attacks on secular humanism subsided in the 1990s, as the Religious Right turned to other enemies
Is this book a harbinger of another major assault on secular humanists?
LaHaye is coauthor of a series of best-selling novels. He is founder of the fundamentalist Creationist Institute and his wife, Beverly, heads Concerned Women of America, another ultra-conservative organization. Both LaHaye and Noebel are outspoken opponents of humanism.
What is unique this time around is that Mind Siege concentrates on Humanist Manifesto 2000, which was first published in Free Inquiry in the fall of 1999 and is held to be “the bible of humanists” along with Humanist Manifestos I and II. LaHaye and Noebel deplore “scientific naturalism” and “planetary humanism” as undermining Christian faith and American patriotism. They shift back and forth between the various Manifestos, even though the older ones were written decades ago when global political and economic conditions were different.
The Council for Secular Humanism has explicitly and repeatedly denied that it is a “religion,” and we have affirmed that secular humanists can lead a moral life and be good citizens without religious faith. Secular humanism is an ethical, philosophical, and scientific outlook. It is not a religion. Yet in this broadside, all humanist organizations in the United States are equally condemned.
Let us hope that this not the beginning of a major new assault, and that it will not be used by the religious right or their cohorts in the Bush administration and the conservative media to restrict the rights and freedom of secular humanists. We have countered this angry diatribe with a reasoned video of our own

The photograph is of a small plastic crucifix submerged in a glass of what appears to be a yellow liquid. The artist has described the substance as being his own urine.[3][4] The photograph was one of a series of photographs that Serrano had made that involved classical statuettes submerged in various fluids—milk, blood, and urine.[5] The photograph is a 60×40 inch Cibachrome print. It is glossy and its colors are deeply saturated. The presentation is that of a golden, rosy medium including a constellation of tiny bubbles. Without Serrano’s explanation, the viewer would not necessarily be able to differentiate between the stated medium of urine and a medium of similar appearance, such as amber or polyurethane.[6]

Serrano has not ascribed overtly political content to Piss Christ and related artworks, on the contrary stressing their ambiguity. He has also said that while this work is not intended to denounce religion, it alludes to a perceived commercializing or cheapening of Christian icons in contemporary culture.[7]

The art critic Lucy R. Lippard has presented a constructive case for the formal value of Serrano’s Piss Christ, which she characterizes as mysterious and beautiful.[6] She writes that the work is “a darkly beautiful photographic image… the small wood and plastic crucifix becomes virtually monumental as it floats, photographically enlarged, in a deep rosy glow that is both ominous and glorious.” Lippard suggests that the formal values of the image can be regarded separately from other meanings.[8]

[edit] ReceptionThe piece caused a scandal when it was exhibited in 1989, with detractors, including United States Senators Al D’Amato and Jesse Helms, outraged that Serrano received $15,000 for the work, part of it from the taxpayer-funded National Endowment for the Arts. Serrano received death threats and hate mail, and lost grants due to the controversy.[9] Others alleged that the government funding of Piss Christ violated separation of church and state.[10][11] The work was vandalized at the National Gallery of Victoria, Australia, and gallery officials reported receiving death threats in response to Piss Christ.[12] Supporters argued that the controversy over Piss Christ is an issue of artistic freedom and freedom of speech.[12]

Sister Wendy Beckett, an art critic and Catholic nun, stated in a television interview with Bill Moyers that she regarded the work as not blasphemous but a statement on “what we have done to Christ”: that is, the way contemporary society has come to regard Christ and the values he represents.[13]

During a retrospective of Serrano’s work at the National Gallery of Victoria in 1997, the then Catholic Archbishop of Melbourne, George Pell, sought an injunction from the Supreme Court of Victoria to restrain the National Gallery of Victoria from publicly displaying Piss Christ, which was not granted. Some days later, one patron attempted to remove the work from the gallery wall, and two teenagers later attacked it with a hammer.[14] The director of the NGV cancelled the show, allegedly out of concern for a Rembrandt exhibition that was also on display at the time.[10]

Piss Christ was included in “Down by Law,” a “show within a show” on identity politics and disobedience that formed part of the 2006 Whitney Biennial. The British Channel 4 TV documentary Damned in the USA explored the controversy surrounding Piss Christ.

On April 17, 2011, a print of Piss Christ was vandalized “beyond repair” by Christian protesters while on display during the Je crois aux miracles (I believe in miracles) exhibition at the Collection Lambert, a contemporary art museum in Avignon, France.[15][16] Serrano’s photo The Church was similarly vandalized in the attack.