Homophobe In Charge of Jewish Identity

You know I will post on this – for a week! Right now, I am just wondering what our Governor-elect thinks about this?

One of the Knesset’s most far-right politicians, who holds non-pluralist Jewish views and anti-LGBT, sexist, and anti-Arab positions, will be the next government’s head of “Jewish identity,” following an agreement signed Sunday with presumed prime minister-to-be Benjamin Netanyahu.

Avi Maoz, the single lawmaker of the fringe Noam party, will be appointed deputy minister and head a to-be-created authority for Jewish identity, which will be housed under the Prime Minister’s Office.

Maoz’s inclusion in the nascent coalition is not vital to Netanyahu’s majority — the Likud leader and his allies won 64 seats in the 120-member Knesset in this month’s elections. But Netanyahu helped pave Maoz’s path into parliament, in both this year’s and last year‘s elections, by brokering alliances on the political far-right, and was not deterred from empowering so radical a politician with so resonant a role as head of a government authority on Jewish identity, albeit one with as-yet unspecified responsibilities.

While Netanyahu’s Likud only shared partial details of the agreement on Sunday evening, the party said that among the organizations to be transferred to Maoz’s authority is Nativ, which is responsible for processing Jewish immigration to Israel from the former Soviet Union.

Among Maoz’s radical positions, he has said that he wants to constrain eligibility for Jewish immigration to Israel by removing the ability for grandchildren of Jews who are not Jews themselves to qualify under Israel’s Law of Return. Many immigrants to Israel from the former Soviet Union obtain their citizenship under the so-called grandfather clause, and transferring the office that handles their applications to Maoz’s purview may affect their processing.

The coalition agreement with Noam, with the resonant responsibilities and deputy minister’s post for Maoz was announced just days after Likud agreed to make far-right provocateur Itamar Ben Gvir police minister with expanded authorities. It brings Netanyahu one step closer to forming Israel’s most hardline government ever, comprising only right-wing, far-right, religious, and ultra-Orthodox parties.

Shortly after retaining his Knesset seat on November 1, as part of his Noam party’s alliance with Ben Gvir’s Otzma Yehudit and the Religious Zionism party (a technical alliance engineered by Netanyahu for political expedience and disbanded last week), Maoz said that the Law of Return that establishes Jewish eligibility for Israeli citizenship was being abused to “bring gentiles” into Israel.

“It has been proven once again that the Law of Return, whose purpose is to perpetuate the responsibility that the State of Israel has toward the Jews of the world, is absurdly used to bring gentiles into the State of Israel, and to systematically lower the percentage of Jews in the State of Israel,” Maoz said, as quoted by the Ynet news site. “It’s time to fix this thing, and that’s what we’ll do,” he promised. 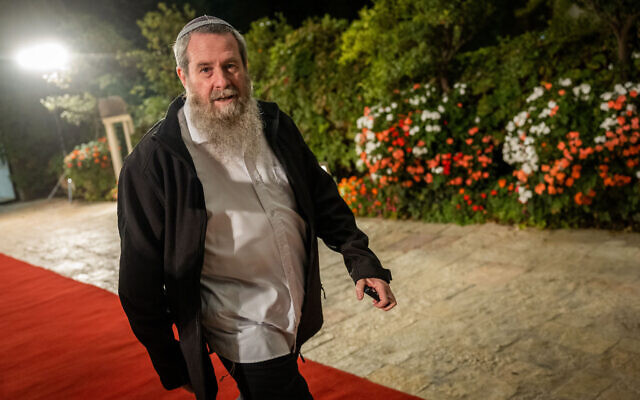 In addition to circumscribing the grandfather clause, Maoz and religious political allies are pushing to carve out non-Orthodox conversion to Judaism from acceptable proofs of Jewishness for immigration.

His Noam party also ran campaign ads in advance of the November 1 election that said that Arab teachers in Jewish schools contributed to the erasure of Jewish identity, a position condemned as racist by some Jewish lawmakers.

In terms of women, Maoz has pushed to “immediately” close the Israel Defense Forces’ gender affairs unit that promotes women’s place in the military.

He is against women in combat positions, has called to shut down egalitarian prayer at Jerusalem’s Western Wall, and supports a religious party-backed proposal to legalize gender segregation at public events.

Maoz campaigned on “strengthening the Jewish character of the State of Israel” by having stricter national observance of Shabbat, strengthening the Orthodox Rabbinate’s monopoly over religious life, injecting religious law into broader society and promoting “family values.” He and his Noam party hold a number of homophobic positions.

Noam first burst onto the political scene in 2019 with a series of provocative highway billboards and video ads with the slogan “Israel chooses to be normal.” The party claims that the LGBT community has “forced its agenda” on the rest of Israeli society, which believes in a “normal” (heteronormative) family structure.

It has also likened LGBT and Reform Jews to the Nazis. A 2019 campaign video compares Reform Jews, left-wing activists, and gay rights advocates to Nazis and Palestinian suicide bombers, saying all of them “want to destroy us.”

Maoz himself has recently advocated shutting down Pride parades, reinstating “mother” and “father” on government forms in lieu of the newly-adopted “parent,” and enabling now-banned and largely debunked gay conversion therapy.

Noam’s spiritual leader, the prominent national-Haredi rabbi Zvi Tau, has been a leading voice in the national religious community against LGBT acceptance. In 2017, he wrote that homosexuality is the “ugliest deviation, which breaks down family life… and contradicts the first basis of human existence.”

Tau has recently been accused of a spate of sexual assaults, allegedly reaching back decades.

Screen capture from video of Dorit, one of two women who accuse Rabbi Zvi Tau of rape, November 13, 2022. (Channel 13. Used in accordance with Clause 27a of the Copyright Law)

Lawmakers from the outgoing coalition denounced the agreement inked Sunday between Noam and Likud.

“From now on, according to Netanyahu and Avi Maoz, there are Class A Jews and Class B Jews,” Yesh Atid said in a statement, while Labor MK Gilad Kariv, a Reform rabbi, called the appointment a “slap in the face” to secular people, traditionalist Jews, women, and gays.

“MK Maoz will find that the majority of the public will stand up to his party’s attempts to proselytize and sow hatred,” Kariv tweeted.

The Reform movement in Israel also came out strongly against the coalition agreement.

“We remind the presumed head of the [Jewish identity] authority that there is more than one way to be a Jew or Jewess. Avi Maoz, who got a job with excessive funding from the [presumed] prime minister-elect will not decide for millions of Jews and Jewesses in Israel and the Diaspora what those ways are,” the movement said in a statement.

Likud’s agreement with Noam is the second inked during the ongoing coalition negotiations, following a partial agreement with Otzma Yehudit to appoint Ben Gvir as national security minister, as well as assign the party two additional ministers, a deputy minister, and two committee heads.

Religious Zionism, United Torah Judaism, and Shas have yet to sign a deal with Likud.