I am marrying Clarence Thomas, Pope Francis, to Bob Jones – forever! How about – Bringham Young? I will be posting on the RESTRICTED MARRIAGES ordained by religions who USE JESUS to divide people and pit them against one another. The War of the Religions have resulted in much death.

Samuel Jackson has pointed out the HYPOCRACY of Clarence Thomas in regards to mixed-race marriages.

“Mary Miller went full on white supremacist on Saturday—then tried to backtrack. During a rally at The Adams County Fairgrounds in Quincy, Illinois, which was hosted by Donald Trump, Miller urged supporters to secure her re-election in Illinois’ 15th congressional district.

However, it didn’t take long for her to praise the former president for the role he played in the Supreme Court’s official decision—revealed Friday—to reverse a woman’s guaranteed right to abortion.

“President Trump, on behalf of all the MAGA patriots in America, I want to thank you for the historic victory for white life in the Supreme Court yesterday,” Miller stated. Her words were met with cheers and applause.

AS THE SENATE prepared to vote to confirm Brett Kavanaugh to the Supreme Court on Saturday afternoon, evangelical Christian leaders were gathered at a secretive retreat in North Carolina to plan the conservative movement’s path forward.

The Council for National Policy, which operates covertly and brings together faith-based conservatives to discuss political strategy, was holding a planning meeting in a second-floor ballroom at the Westin hotel in Charlotte when the Senate confirmed President Donald Trump’s second Supreme Court pick by a 50-48 vote.

After a tumultuous few weeks in which Kavanaugh was accused of sexual assault, the group had remained cautious until the final moments, several participants told The Intercept. Following the Senate’s procedural vote on Kavanaugh’s nomination on Friday, the CNP attendees gathered that evening during dinner to pray that victory was near. 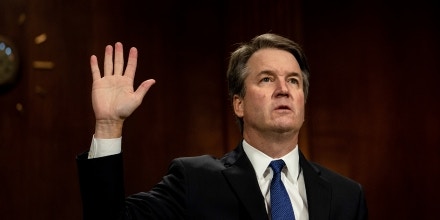 Their prayers, it seems, were answered. Kavanaugh’s confirmation cemented a decadeslong push to cement a conservative majority on the high court, an objective long desired by the CNP.

The agenda for the event featured a veritable who’s who of Christian conservatives, including Ginni Thomas, the spouse of Justice Clarence Thomas; U.S. Ambassador to the U.N. Nikki Haley; former Sen. Jim DeMint, the former president of the Heritage Foundation, a conservative think tank; pollster Frank Luntz; and Rep. Jim Jordan, R-Ohio, who is seeking a leadership role in the House after Speaker Paul Ryan, R-Wisc., retires this year.

Pope Francis presides over a mass celebrated by U.S. Cardinal Kevin Joseph Farrell in St. Peter’s Square at the Vatican for the participants into the World Meeting of Families in Rome, Saturday, June 25, 2022. The World Meeting of Families was created by Pope John Paul II in 1994 and celebrated every three years since then in different cities. (AP Photo/Andrew Medichini)

ROME (AP) — Pope Francis celebrated families Saturday and urged them to shun “selfish” decisions that are indifferent to life as he closed out a big Vatican rally a day after the U.S. Supreme Court ended constitutional protections for abortion.

Bob Jones University Apologizes for Its Racist Past (jbhe.com)

”let’s review the racial history of Bob Jones University. The university’s founder, Bob Jones, was a fundamentalist evangelist who believed that the theory of evolution was an abomination. He called the pope the anti-Christ and dismissed Catholicism as a “Satanic counterfeit.” He once said, “I would rather see a saloon on every corner than a Catholic in the White House.” Jones Sr. was of the view that twentieth-century blacks should be grateful to whites for bringing their ancestors to this country as slaves. If this had not happened, Jones wrote in 1960, “they might still be over there in the jungles of Africa, unconverted.”

The Real Origins of the Religious Right – POLITICO Magazine

But the abortion myth quickly collapses under historical scrutiny. In fact, it wasn’t until 1979—a full six years after Roe—that evangelical leaders, at the behest of conservative activist Paul Weyrich, seized on abortion not for moral reasons, but as a rallying-cry to deny President Jimmy Carter a second term. Why? Because the anti-abortion crusade was more palatable than the religious right’s real motive: protecting segregated schools. So much for the new abolitionism.

On at least three occasions (1847,[48] 1852,[49] and 1865[50]) Smith’s successor Brigham Young publicly taught that the punishment for black–white interracial marriages was death, and the killing of a black–white interracial couple and their children as part of a blood atonement would be a blessing to them.[32]: 37, 39 [51] He further stated that interracial children are sterile “like a mule“, a teaching later repeated in a church magazine.[48][52] Young taught that the moment the church consents to white members having children with black individuals the church would go to destruction,[32]: 37 [53] and that, “Any man having one drop of the seed of Cane in him cannot hold the priesthood.”[54] Young also taught that people who had children with a black person would be cursed to the priesthood.[32]: 37

Samuel L. Jackson is weighing in on the fallout around the Supreme Court’s latest ruling.

The Academy Award honoree, 73, called out Justice Clarence Thomas‘ after Thomas suggested the court should reconsider other key decisions, including the 2015 case establishing the right to same-sex marriage, following the SCOTUS decision to overturn 1973’s Roe v. Wade and the constitutional right to abortion.

Thomas, who was nominated by President George H. W. Bush as the second Black person to ever serve on the Supreme Court in 1991, wrote in a concurring opinion that SCOTUS should next “reconsider” the rulings that legalized birth control, sodomy and same-sex marriage.

Jim Obergefell, one of the plaintiffs in the historic Obergefell v. Hodge case that guaranteed the right to marry to same-sex couples, said in a statement sent to PEOPLE that Thomas is “not the Supreme Deity.”

“Clarence Thomas is a Supreme Court justice appointed by humans, he is not the Supreme Deity. The millions of loving couples who have the right to marriage equality to form their own families do not need Clarence Thomas imposing his individual twisted morality upon them. If you want to see an error in judgment, Clarence Thomas, look in the mirror,” he said.

RELATED: Alexandria Ocasio-Cortez Opens Up About Being Raped in Her 20s: ‘I Felt So Alone’

U.S. Senator Elizabeth Warren also called out Thomas in a tweet on Sunday: “Clarence Thomas made it clear: right-wing extremists aren’t stopping at abortion. They’re coming after marriage equality, contraception, & anyone who doesn’t live & look like their idea of the ideal American. But the Supreme Court won’t get the last word—the American people will.”

Friday’s 6-to-3 ruling reversed nearly 50 years of precedent, giving states the power to pass their own laws around abortion. Since the decision, Arkansas, Kentucky, Louisiana, Missouri and South Dakota have already banned abortion in their states, after putting “trigger bans” in place that governors enacted after the SCOTUS ruling.

Protests have since erupted around the country, and President Joe Biden has spoken out against the ruling, which he called the “realization of an extreme ideology and a tragic error by the Supreme Court.”

The decision comes after the SCOTUS opinion was leaked to Politico last month. A poll conducted by CNN has since found that 66 percent of Americans did not want Roe v. Wade to be overturned.