“Redevelopment of the Downtown Riverfront has been part of the community’s vision for decades,” the City said Thursday, “and this is another opportunity to ensure our new neighborhood reflects Eugene and its community members as the vision starts taking shape.”

I rode my bicycle almost everyday, from 19th and Kincaid, to the Cambell Center to visit my friend Ed, who used to be my Nighbor. Night nor rain stopped me. I would work on this blog until 2:00 P.M. then head to Ed’s to play Tiger Woods Golf, or Go-Kay. If he were still alive we would be mapping out a new course on the new grass.

Here is a punk pushing around fellow Seniors, he blaming us for all that has gone wrong for his generation. The Seniors in Eugene have been deprived of a downtown park for twenty years thanks to the homeless and young thugs. One Senior takes off his glasses. We got to fight for our park bench.

A heckler disrupted the grand opening of the new park along the Willamette River in Eugene to protest the sweeps of homeless camps. Police cited the 23-year-old Springfield man for a violation of park rules. (SBG)

EUGENE, Ore. – A heckler disrupted the grand opening of the new park along the Willamette River in Eugene to protest treatment of the homeless.

Police cited the 23-year-old Springfield man for a violation of park rules.

EUGENE, Ore. — A vibrant park downtown is a new hub for community events in the city of Eugene.

Downtown Riverfront Park is located across the DeFazio Bridge and is the city’s effort to turn the old Eugene Water and Electric Board’s utility yard into a park that connects downtown Eugene to the Willamette River.

At the grand opening Friday, city officials including Mayor Lucy Vinis and City Manager Sarah Medary made speeches about the development.

The four-acre property stretches about a third of a mile along the Willamette River.

Construction began in May 2020. Improvements to the property include walking paths, seating areas, decks, river outlooks and a new section of the bike path.

Dozens of community members came to the grand opening. Several of them told KEZI they are excited about the park.

“It’s a sight to behold and it’s so beautiful,” said Eugene resident Stanley Hamilton. “It’s the perfect addition of things to do in Eugene, Oregon.”

Many said it’s a place to escape the bustling downtown.

“Anything you have a downtown area, you need a place to chill from all the hecticness,” said Eugene resident Lorian Reynolds. “It’s so nice to have a place to walk right next to the river and hang out.”

The grand opening of the riverfront park comes about one month before the World Athletics Championships kicks off at Hayward Field.

“I’m excited to see, when the athletic events open, what this park is going to look like,” said Eugene resident Thomas Hiura. “Visitors to the area, especially if they’re interested in athletics, are probably going to enjoy the opportunity to walk all the way up the river and make their way up to Hayward.”

During the World Athletics Championships, Downtown Riverfront Park is holding a festival free to community members.

It will offer food, music, entertainment and a livestream of the championships.

City leaders said the Downtown Riverfront Festival is the only public place to watch the championships live for free.

Both the World Athletics Championships and the festival go from July 15 to July 24.

The Glenwood Refinement team switched allegiance to the Patel Family of India. The Register Guard does not give any background on the Patel family, a name that means

“one who holds pieces of land”

When the Glenwood opens ‘The Gateway to Bombay’  us old McKenzie River Loggers and Bohemian Men will come down and play a game of Gokay on the grass islands. Gokay is the combination of golf and croquette.

When the Republican King of Bombay and Babylon wins another term, we can hold a Grand Elephant parade. My vision of the Carpenter Ant Queen, was spot on!

The Downtown Riverfront Park is located along the Willamette River at the site of the former EWEB utility operations yard. (City of Eugene)

Free “Artistic Encounters” performances by Harmonic Laboratory will take place under the new art pavilion, SubSupra, through the weekend:

The Downtown Riverfront Park is located in the former EWEB utility operations yard. Construction began in May of 2020. 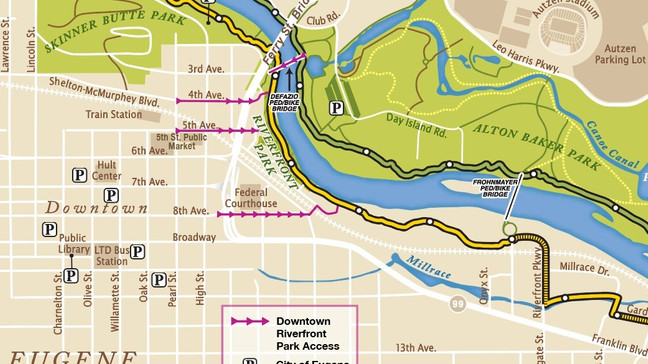 The Downtown Riverfront Park is located along the Willamette River at the site of the former EWEB utility operations yard. (City of Eugene)

According to the City of Eugene:

The Downtown Riverfront Park will host a free fan festival for the World Athletics Championships, held at Hayward Field July 15-24.