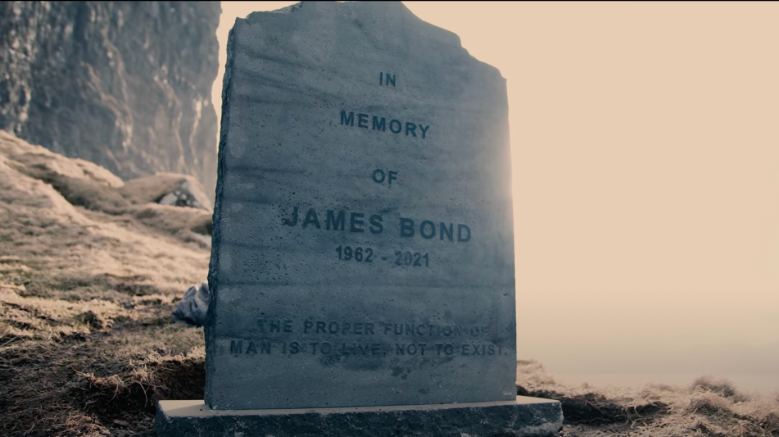 “No Time to Die” grave

After the final installment of Craig’s turn as Bond, the Faroe Islands commissioned a custom grave to honor the filming location of “No Time to Die.” The island of Kalsoy served as the villain’s lair for Bond’s nemesis Lyutsifer Safin (Rami Malek), who ultimately kills the famed MI6 agent.

Yesterday I made three videos about the British Intelligence in the Siege Charleston. My space bar is acting up. I am going to give a live video report from now on. My Bond novel – is real intelligence.

CANBERRA, Australia (AP) — Demoralized Russian soldiers in the Ukraine were refusing to carry out orders and sabotaging their own equipment and had accidentally shot down their own aircraft, a U.K. intelligence chief said on Thursday.

Paris — The head of France’s military intelligence has quit his post in what’s being seen as fallout from France misjudging Russia’s intentions in Ukraine. As the U.S. predicted Russia was ready to invade Ukraine, France preferred to believe it wouldn’t go that far.

Early in March, the head of France’s armed forces, General Thierry Burkhard, admitted there had been very different interpretations of available intelligence.

“The Americans said that the Russians were going to attack, and they were right,” he told Le Monde newspaper. “Our services thought instead that the cost of conquering Ukraine would be colossal and that Russia had other options” to bring down the regime of President Volodymyr Zelenskyy.

On Wednesday, General Eric Vidaud quit his post as head of French military intelligence. French media reports said he was to be moved to another service this summer as part of an organizational reshuffle, but he preferred to quit now.

Vidaud had only been in the job for seven months, following two years as head of Special Operations. He was previously posted to the French Defense Ministry, working closely with the then Defense Minister Yves Le Drian (now Foreign Minister). Prior to that he was commander of the 1st Marine Infantry Parachute Regiment.

Reports suggested that French intelligence on Russian plans lagged behind that of the U.S. and Britain – but as both Washington and London opted to publicly release much of their intelligence, there was criticism that France’s own military intelligence agency had failed to accurately interpret it.

That, as French president Emmanuel Macron continued to push for a diplomatic solution to the crisis. As he returned from an in-person visit with the Russian president in Moscow in February, just ahead of the invasion, Macron told journalists that Vladimir Putin had changed considerably since he last saw him in 2019, before the outbreak of the coronavirus pandemic.

Sources at Macron’s office said at the time that Putin seemed clearly “paranoid,” and suggested it would be much more difficult to predict his movements than they had previously believed.

nderstand the ‘style of our work’ amid reports that Putin’s advisors are too scared to tell him the truth (msn.com)

The Kremlin on Thursday pushed back on US reports that Russian President Vladimir Putin is being fed bad information by his top advisors about his military’s failures in Ukraine because they are “too afraid to tell him the truth,” saying that American officials “don’t understand” how Russia works.

The Farmer’s Dog Putin’s spokesman Dmitry Peskov told reporters that “it turns out that neither the State Department nor the Pentagon have real information about what is happening in the Kremlin,” according to state-run newspaper Rossiyskaya Gazeta.

Peskov added, “It is not just regrettable, it elicits concern, because this complete lack of understanding leads to erroneous decisions, tragic decisions that could have very bad consequences,” according The Associated Press.

A US official, citing declassified intelligence, told reporters on Wednesday that it is believed that Putin is being deceived by his senior advisors about Russia’s five-week invasion of Ukraine because they are “too afraid to tell him the truth.”

“We believe that Putin is being misinformed by his advisors about how badly the Russian military is performing and how the Russian economy is being crippled by sanctions because his senior advisors are too afraid to tell him the truth,” the official said.

“Putin didn’t even know his military was using and losing conscripts in Ukraine, showing a clear breakdown in the flow of accurate information to the Russian president,” the official said.

Yet despite Ukraine’s armed forces being greatly outnumbered and outgunned by Russian troops, the Ukrainians have put up fierce resistance, resulting in a mounting Russian death toll and a largely stalled invasion.