This Futurian Reporter – saw this coming!

DGFD For a world without Gay Nazism

“Can not live without oysters and gender freedom!”

” attendees were told they would have Russian flags and should put white “Z” marks on their clothing, a pro-war symbol seen daubed on the country’s military vehicles in Ukraine.”

There is a mysterious gap in The Dead Show. Was this where Putin introduced Starfish, and, she held up a DEATH TO PUTIN sign – then went berserk?

“The best proof is the way our boys are fighting in this operation: shoulder to shoulder, supporting each other, and if need be, protecting each other like brothers, shielding one another with their bodies on the battlefield. We haven’t had this unity for a long time,” Putin told the crowd.

Datsishin, a principal dancer with the National Opera of Ukraine, was wounded in Kyiv two days after Russia launched a large-scale invasion on Feb. 24, according to the Evening Standard, which reported he was 43. 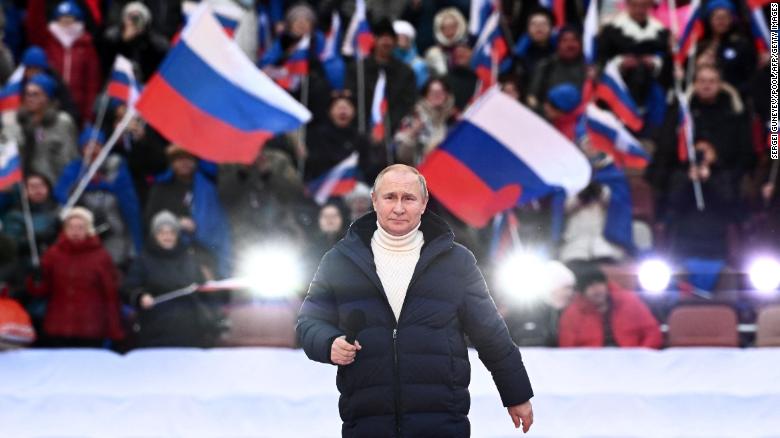 Russian President Vladimir Putin attends a concert marking the eighth anniversary of Russia’s annexation of Crimea at the Luzhniki stadium in Moscow on March 18, 2022.

(CNN)Russian President Vladimir Putin justified the invasion of Ukraine at a rally in Moscow on Friday, where his speech was abruptly cut off on the state TV broadcast in what the Kremlin described as a technical error.

Tens of thousands of people waved the Russian flag at the national stadium as they took part in celebrations commemorating the eighth year of Russia’s annexation of Crimea — which is deemed illegal by the Ukrainian government and not recognized in the West.

Speaking from a stage in front of a banner that read, “For a world without Nazism,” Putin said Russia “will definitely implement all our plans” in Ukraine.

“To spare people from this suffering, from this genocide — this is the main reason, motive and purpose of the military operation that we launched in the Donbas [an eastern Ukrainian region] and Ukraine,” he said.

Russian state TV later replayed Putin’s full speech without problems, but the Kremlin refused to confirm or deny if the event was live or pre-recorded.

Zardoz came to the Wayne Morse Free Speech Square. I saluted a fellow Wizard of Oz.

Come back………when you know something!

Play half the Shofar video, then hit the drum circle video. Halfway into that, play Shofar, and at end of drumming. The New Jubilee Week will end on Friday, and sundown. 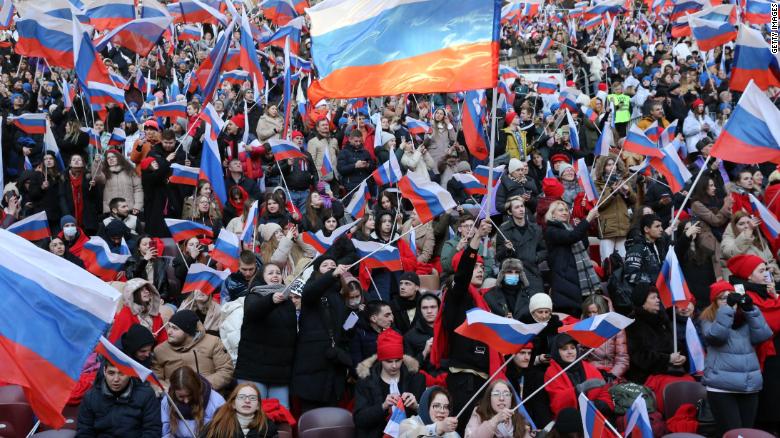 Russians hold flags and cheer during the concert that featured live music and speeches from high-profile Putin supporters. 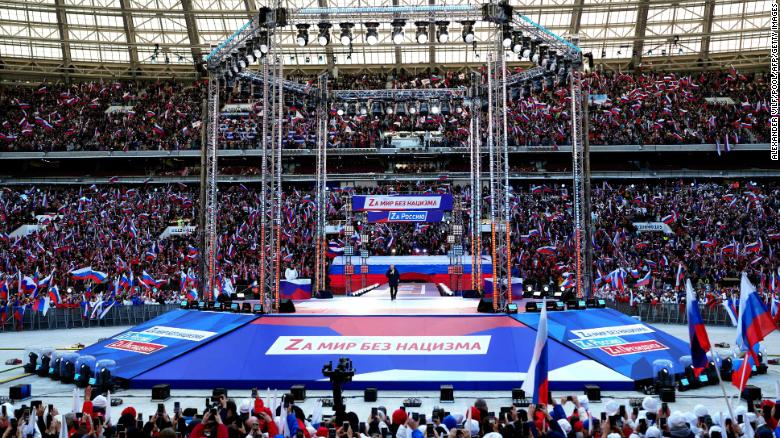 Putin gave an upbeat assessment of the invasion during his speech at the concert.

Putin insisted that national unity was the strongest in a long time, even as many people flee Russia or protest against war in the streets, and as the country is increasingly isolated on the global stage.

Enter your email to subscribe to the CNN Five Things Newsletter.

“The best proof is the way our boys are fighting in this operation: shoulder to shoulder, supporting each other, and if need be, protecting each other like brothers, shielding one another with their bodies on the battlefield. We haven’t had this unity for a long time,” Putin told the crowd.

State workers were told by authorities to attend the celebrations. In an invitation given out to teachers in one of Moscow’s state schools and obtained by CNN, attendees were told they would have Russian flags and should put white “Z” marks on their clothing, a pro-war symbol seen daubed on the country’s military vehicles in Ukraine.

But not everyone was happy to go. Ekaterina, 26, an elementary school teacher at the school, told CNN that she and her colleagues were asked by their school administration to attend the concert the morning before. She asked only to be identified by her first name.

“I refused to go because this goes against my moral principles and I told them that it is not part of my work contract to attend such events. However, I also have a friend from another school who refused to go and was fired,” Ekaterina told CNN.

CNN could not independently verify that her friend was fired.

Presenters and many in the crowd wore pins on their clothes with an orange and black letter Z. The hosts said “well done” when the audience clapped, and Russian pop stars and singers including Polina Gagarina sang tunes at the event.

Presenters, who accused the West of aggression towards Russia, also introduced Russian Olympic athletes like Dina Averina on stage while the crowd chanted “Russia, Russia.” 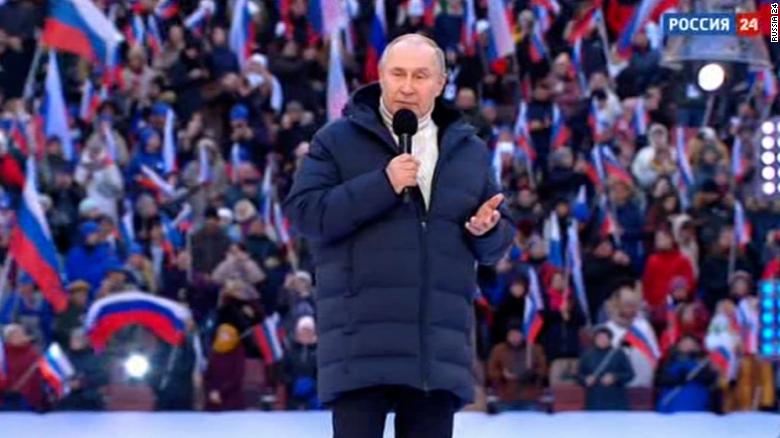 State workers were told by authorities to attend the celebrations.

The rally comes at a tense moment for Russia, as its military struggles to capture key cities like Ukraine’s capital Kyiv and Western officials estimates the country’s troop losses are in the thousands.

US and Western intelligence officials have also observed that Russia is having difficulty replacing its forces, which is having a significant impact on troop morale, senior NATO officials said on Wednesday.

But none of that pessimism was evident in Putin’s speech on Friday. “It so happened that the beginning of the operation … quite by chance coincided with the birthday of one of our outstanding military leaders [and] canonized saints, Fyodor Ushakov, who in his entire brilliant military career did not lose a single battle,” he told the crowd.

“He once said that these thunderstorms will go to the glory of Russia. So it was then, so it is today, and so it will always be!”