Property in Montecito is soaring. There is a strange undeveloped property up for sale. Three days ago Christine Wandel told me her mother made her come home for lunch to keep her from enjoying the wonderful lunches at Brimmer and May. Miss McCoy asked Christine what she had for lunch.

My dear friend was systematically being tortured for causing the Filene scandal. Our mothers were very toxic, to put it mildly. They are women out of Greek Dramas. How fitting they both will haunt the (relocated to Camarillo) Ampitheater above the new ranch of Ruben Blades & Family!

I wanted to marry Christine and introduce her to……..Rosemary! But, then they would have met! The Rose and The Thorn of Beacon Hill would team up to – rule the world! Ruben has escaped the wrath – for now!

Ellen Bothin is the daughter of Anthony Chabot ‘The Water King’. His ghost will haunt the ruins of Mar Y Cel, he tormented by the two Harpies who complain they are forever thirsty. All of California’s water woes are blamed on him. Shades of Chinatown.

I texted Peter last night and said he needs a bigger role in The Haunted Robe. He has not responded. I will offer him the role of Ruby Blaze ‘The Gourd Master’ who plants sacred gourds in the ruins of Mar Y. I will play an old Private Detective – John-John Kennedy – who believes the 1925 earthquake was manmade, or, caused by aliens who built a secret chemtrail spaceport employing a nuclear weapon. John-John got the attention of The Trumpwon Cult when he posted a search for his lost son….

The cult believes the JJJ stands for John, Joseph, and Jesus! The J Trinity!

In the foothills above Montecito, Calif., a roughly 330-acre property with the remains of an amphitheater and stone aqueducts is hitting the market for $78 million.

With views of the coast, it is one of the largest undeveloped properties in the wealthy enclave, said listing agent Chris Harrington of Coldwell Banker Realty. Known as Mar Y Cel, the property is a series of 18 parcels, he said.

The sellers are Keith Schofield, 83, a research chemist and retired professor at the University of California at Santa Barbara, and his wife, Kay Robinson Schofield, 74. The couple bought the property for $14 million in 2000 with the intent of building a family compound, Mr. Harrington said.

Mar Y Cel is a local landmark developed at the turn of the last century by Henry and Ellen Bothin, Mr. Harrington said. Mr. Bothin was an industrialist who made a fortune in steel and real estate, according to “Henry E. Bothin, Philanthropist of Steel,” by Michael Casey, Mr. Bothin’s great-grandson.

In the early 1900s, Mr. Bothin and his wife built a roughly 12,000-square-foot mansion called Piranhurst at the foothills of the Santa Ynez mountains, records show.

The Remains of the Day 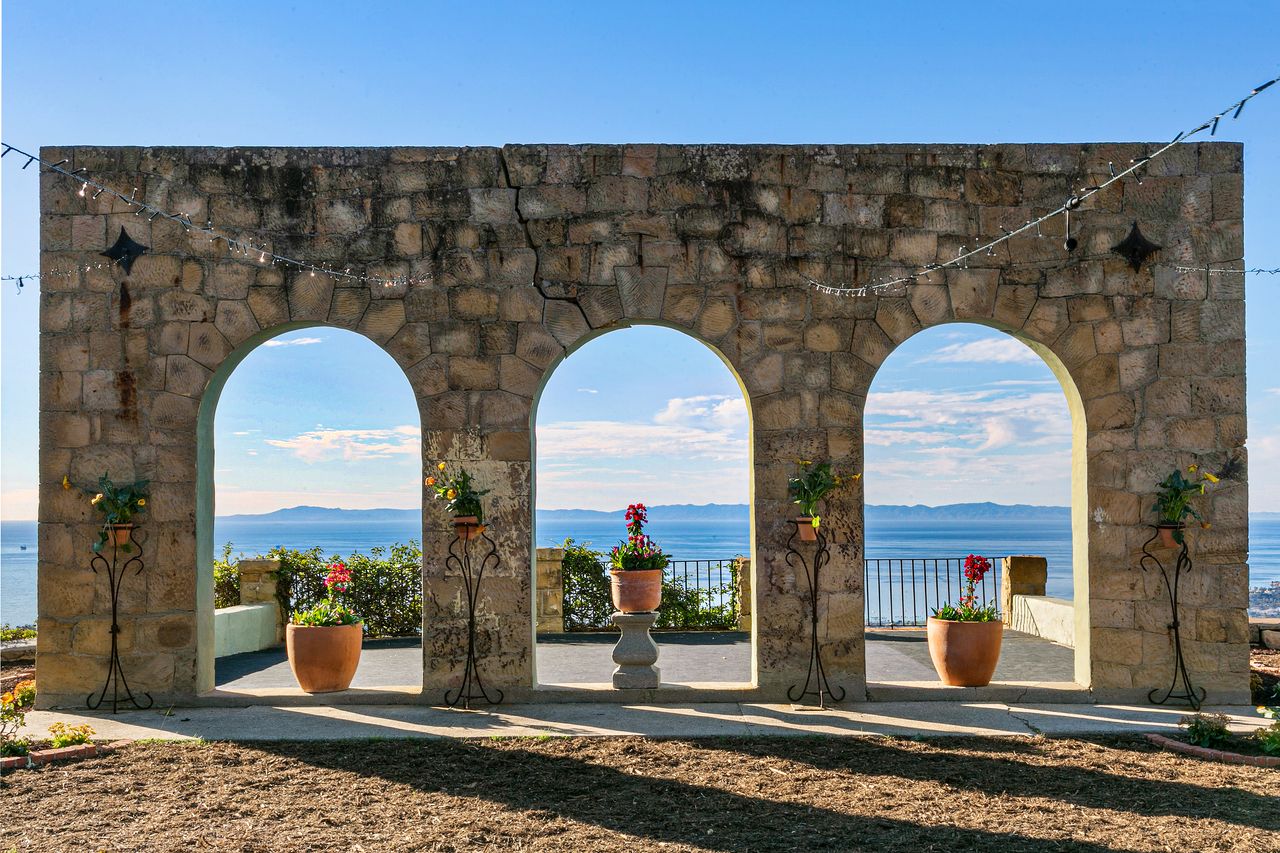 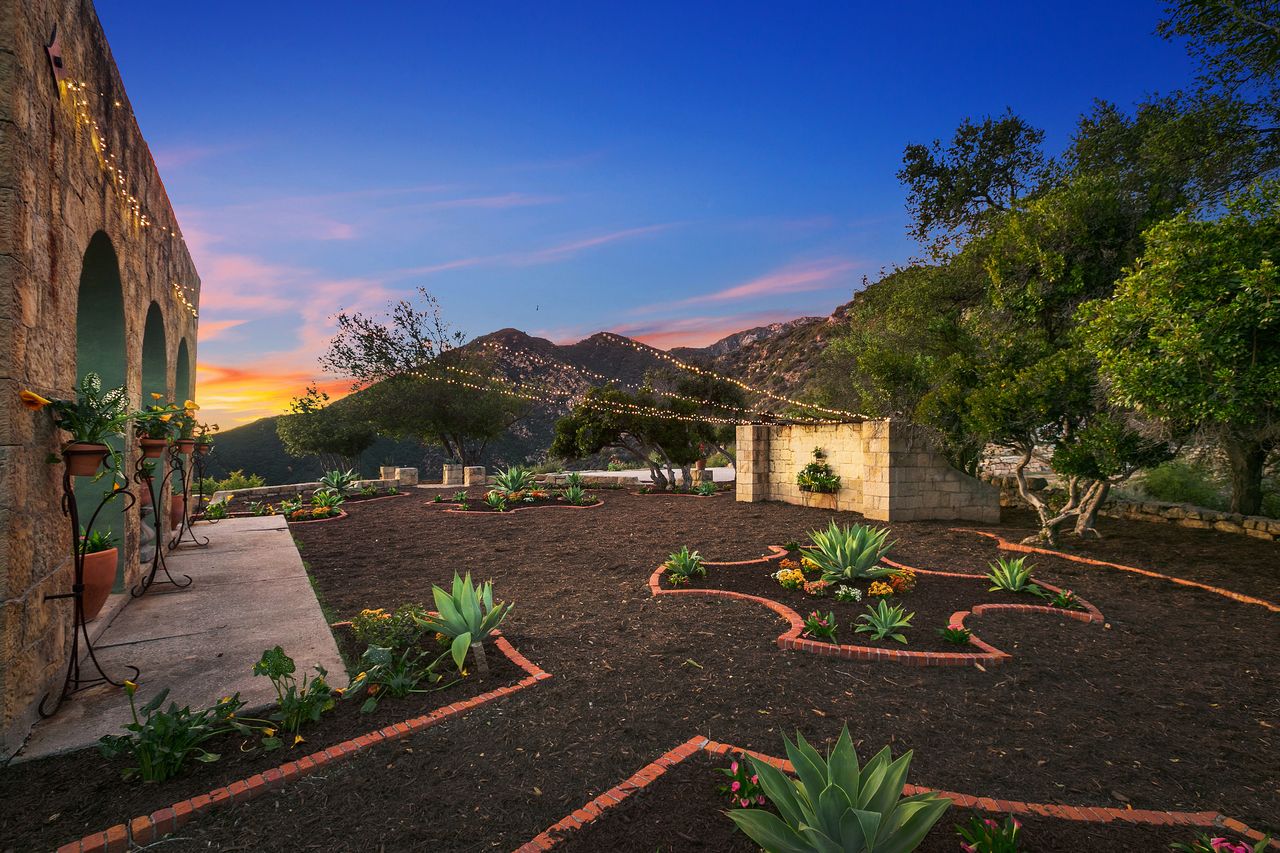 After an earthquake in 1925, a wall with arches remains. PHOTOS: PREVIEW FIRST(2)

To bring water to the estate, they developed an elaborate irrigation system consisting of gardens and reservoirs, as well as gravity-fed aqueducts, waterfalls and scalloped basins. “They were obsessed with water,” said Mr. Schofield. “Back in 1900, water was everything—as it is today.”

The Bothins also built an amphitheater with about 200 seats halfway up the hill, and a “tea house” at the apex of the mountain where they hosted parties. Both were largely destroyed by an earthquake in 1925, Mr. Harrington said.

After Mrs. Bothin died in the 1960s, her heirs split the property in two, selling Piranhurst separately.

Mar Y Cel, comprising the remains of the tea house and amphitheater, traded hands several times before the Schofields bought it in 2000, records show. By then, it had fallen into disrepair, Mr. Harrington said. The couple cleared some of the paths, re-established water lines and repaired and maintained stonework, he said, but their plans to build on the property never came to fruition.

“We do have a house in Santa Barbara already, on the Riviera, and it boils down to you can’t have two major houses in the same town,” Mr. Schofield said. Now that the couple is getting older, he said, they are ready to move on.

What would you like to see happen to this property?

About 150 acres of Mar Y Cel are held in conservation by the Land Trust for Santa Barbara County. Mr. Harrington said 10 of 18 parcels could be easily developed and are ready for the permitting process. He said a potential owner could build a family compound, as the Schofields envisioned, or a community of luxury homes. In addition to the 18 parcels, Mr. Harrington said three other parcels spanning about 12 acres are being offered separately for $12 million.

Mr. Harrington said the “crazy market” makes it the right time to sell. “What makes this unique is the ruins that are on it,” he said. “It feels like old Italian ruins.”

When Ruby Blaze entered the Cosmic Bagel, he was happy to see there was only one place to sit now that the COVID had been defeated by a vaccine cleverly put in the mysterious Chem-Trails. Those paranoids who believed in Chem-trails, were exactly the people who refused to get vaccinated, thus, they were more open to the idea their Personal Choice and Willpower was constantly under attack, and, they lost this battle, but, there would be more in the future. Oh well! You can’t win them all!

Placing his plate and cup of Java carefully on the table, so as not to disturb the elderly gentleman with the long white beard, he was soon befuddled as to what this hermit-like dude was doing. He has a stack of four books before him, and one book in his hand. His lips are moving as he reads, then, he puts that book at the bottom of the stack, and opens the next book, and reads from the marked page. Ruby detects faint whispering as he takes a sip of Columbia-strong. Then, that book is placed at the bottom of the stack – and the next book is raised to the wrinkled tanned face of this very absorbed – nut! He has to be a nut. This is why there was a seat open next to him. The COVID was gone, but, mental illness was here to stay. There is no cure, no vaccine one can take. Gently clearing his throat, Ruby ventures this;

“Excuse me. I read the book you have in your hand. It is a very good book.”

“Excuse me….Did I ask you for a book review. Look what you have done. You broke my concentration. I’m going to have to start all over again.”

Laying Claim To The Literary History of Ventura County

Here is a writer for the LA Times declaring there is no Literary History in Ventura County. I beg to differ – because I know better! My Aunt Lillian told me she saw her father, Royal Rosamond, typing in the living room with Erle Stanley Gardener.

“My father taught him how to write!”

Did Lillian mean Royal taught Erle how to type? My aunt told me that her mother, Mary Magdalene Rosamond went to Ojai to visit her friends in the Theosophic Society. Did they have their library, yet? Then there is the Meher Baba retreat. I read God’s book ‘God Speaks’.

Christine Wandel and I talked for four hours last night. Peter and Christine went to see the thirteen year old guru. We read Yogananda’s book. She had a dog she named Dogananda. At…