Attack of the Compost Commies

The Compost Commies haver duplicated the BIG THINK way of life. Cortez is putting her Puritanical Socialism on hold until after the elections in Georgia. She and her ilk – who back BIG THINK SOCIALISM – are looking for a New Way To Pray – without praying! They have almost invented ‘The Church of Jesus – Without Jesus’.

Below is the Commie Dude that got arrested with Belle and Alley. Why are those tents pitched next to a busy street? Doesn’t the noise bother the poor homeless campers who got nothing to do – all day? Any minute, a car is going to pull up, and, the passenger, or driver, will stick a twenty dollar bill, or a – BIG CHECK – out the window!

“Come and get it you poor saps!”

For asking Belle Burch – if Whoville was keeping an account of these donations like OCCUPY was – they came after me. One of Alley’s BIG THINK goons suggested a lynching party. Big Queen of BIG THINK Haffner – knew this, and is why she got why she got our neighbors all in a froth and cam up with THUG THINK for Springtucky.

There’s no one in those tents. They are – staged! After getting evicted from Whoville and Ken Kesey Square – they spread out! These Grifters set up a Tent Show! Each of them were given at least three NEW tents that they could easily afford after getting some BIG CHECKS! Look at that gang of Shovel Leaners – pretending they love to work!

After seeing the movie Wise Blood, I wanted Harry Dean Stanton to play me in the movies – before I became famous as The Stalker of Belle – who asked me to tell her how I got sober. I’m going to tell the whole story – in a post of two.  Harry was the guy some saw when I drank too much. Paul Drake tried to describe this guy, and them became him as Mick in the movie ‘Sudden Impact’ 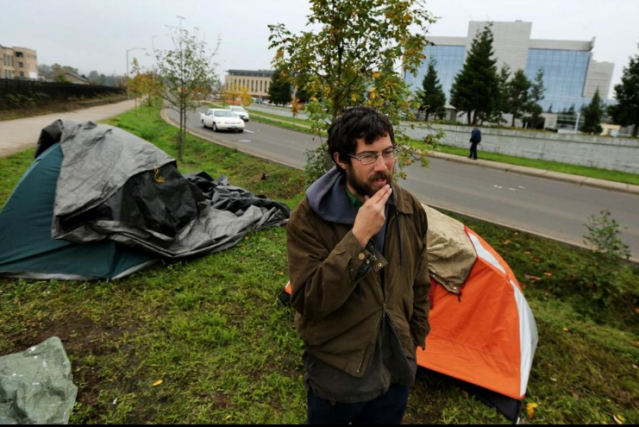 Alley Valkyrie thinks she is hot shit, and was the rightful heir to the Hippie Movement. Then, Belle tried to recruit me into the Order of the Compost Commies who were waging a Wicccan War with the Religious Right, but, didn’t quite get that. Like before, anyone over  thirty – was the enemy. They wanted my newspaper and it’s circulation. They were willing to put up with some  of us old Trippers to achieve their goals. Voting was not on their plate. Composting like crazy, is!

Meanwhile, the King of the Bullshitters is going gaga over Twitter. I suspect Alley went to City Hall meeting stoned on Acid. I was looking for someone to help me thwart the rise of the South and the Evangelicals. But, that couldn’t be real! Rather than debate me. Alley plays her BIG VICTIM CARD that Trump and his End Time Christians play – every…