My kindred Christopher Lee was engaged to Henrietta von Rosen. Her father wanted a reference. Lee gave Douglas Fairbanks Junior whose military service resembles that of Ian Fleming. I am wondering if he is the real model for James Bond. Douglas was made a member of the Knights of Malta. I now wonder if Lee and Fairbanks were spying in the von Rosen family who had ties to the Nazis. Were they looking for stolen art? Why not a secret bloodline that was at the coYour re of the Master Plan for the Master Race?

Clive de Rougemont made sure Victoria was stabilized before he lay it on her.

“You had an affair with Karl von Suttmeister the studmaster of the Royal Stables of  Sweden. He almost go to third base with you. You two settled for dry-humping. He proposed marriage. You turned him down. I suspect he knew of your lineage. You must marry him and have a child. Yes I know that you recently chose to be a Lesbian, but, nine months of pregnancy is essential in capturing a dangerous bloodline. We have tried other ways.  Your child will be the preverbal lamb tied to the stake in Tiger Jungle, You will have to lose your virginity – of course! Here, take another gander at Karl. You must rekindle your affair. You must girt your loins for Nation and Queen.

Lee was engaged for a time in the late fifties to Henriette von Rosen, whom he met at a nightclub in Stockholm. Her father, Count Fritz von Rosen, proved demanding, getting them to delay the wedding for a year, asking his London-based friends to interview Lee, hiring private detectives to investigate him, and asking Lee to provide him with references, which Lee obtained from Douglas Fairbanks, Jr., John Boulting and Joe Jackson. Lee found the meeting of her extended family to be like something from a surrealist Luis Buñuel film and thought they were “killing me with cream”. Finally, Lee had to have the permission of the King of Sweden to marry. Lee had met him some years before whilst filming Tales of Hans Anderson and received his blessing. However, shortly before the wedding, Lee ended the engagement.

Having witnessed (and participated in) British training and cross-Channel harassment operations emphasizing the military art of deception, Fairbanks attained a depth of understanding and appreciation of military deception then unheard of in the United States Navy. Lieutenant Fairbanks was subsequently transferred to Virginia Beach where he came under the command of Admiral H. Kent Hewitt, who was preparing U.S. naval forces for the invasion of North Africa.

Fairbanks convinced Hewitt of the advantages of a military deception unit, then repeated the proposal at Hewitt’s behest to Admiral Ernest King, Chief of Naval Operations. King thereupon issued a secret letter on March 5, 1943 charging the Vice Chief of Naval Operations with the recruitment of 180 officers and 300 enlisted men for the Beach Jumper program.

The Beach Jumpers’ mission would simulate amphibious landings with a very limited force. Operating dozens of kilometers from the actual landing beaches and utilizing their deception equipment, the Beach Jumpers would lure the enemy into believing that theirs was the principal landing.

United States Navy Beach Jumpers saw their initial action in Operation Husky, the invasion of Sicily. For the remainder of the war, the Beach Jumpers conducted their hazardous, shallow-water operations throughout the Mediterranean.

For his planning the diversion-deception operations and his part in the amphibious assault on Southern France, Lieutenant Commander Fairbanks was awarded the United States Navy’s Legion of Merit with bronze V (for valor), the Italian War Cross for Military Valor, the French Légion d’honneur and the Croix de guerre with Palm, and the British Distinguished Service Cross.

Count Carl Gustaf Ericsson von Rosen (19 August 1909 – 13 July 1977) was a Swedish pioneer aviator, humanitarian, and mercenary pilot. He flew relief missions in a number of conflicts as well as combat missions for Finland (whose first military aircraft his father had donated in 1918) and Biafran rebels. His flights for the Biafran rebels were notable for using the small Malmö MFI-9 in a ground attack role.

Von Rosen was born in Helgesta, Flen Municipality, Södermanland, Sweden and grew up on Rockelstad Castle. He was the son of the explorer Count Eric von Rosen (1879–1948), co-founder of National Socialist Bloc, and baroness Mary Fock (1886–1967).[1] He was nephew of Carin Göring, wife of Hermann Göring. Throughout his upbringing, Carl Gustaf appeared to have had serious differences in opinion with his family, with one author referring to him as the “black sheep of his family.”[2] One brother, Björn (1905–1989), was a writer, graphic artist and painter. The sister Birgitta Wolf (1913–2009) was a writer and human rights activist. At an early age, Carl Gustaf was interested in mechanics; his subsequent fascination with flying machines was likely influenced by his uncle, who was a fighter ace during World War I (and later head of the German Luftwaffe).

He was a student at Lundsbergs boarding school from 1920 to 1926 and at AB Aeromateriel’s flight school in 1929 and took the pilot’s license test in the same year. Von Rosen took the airline pilot exam in 1934.[1] Von Rosen himself started his flying career as a mechanic before becoming an aerobatic stunt pilot in a travelling circus.

When the Italians under Benito Mussolini attacked the independent empire of Ethiopia, von Rosen joined the Swedish Red Cross ambulance mission. He also repeatedly flew casualties out from the battlefield under extremely dangerous conditions.[3] This activity resulted in him receiving mustard gas burns due to the use of the gas by the Italian Air Force.[3]

After his return from the war in Ethiopia, he went to the Netherlands to join KLM, the first public airline in the world, and became one of their foremost pilots.

Von Rosen’s happiness with Hanny ended with the outbreak of World War II. She joined the resistance, was arrested by the Gestapo and sent to Dachau in Germany. After the war she committed suicide[citation needed] in 1949.

When the Soviet Union invaded Finland in 1939 in the Winter War, von Rosen quit his job to fly bombing missions for the Finns. He purchased a KLM Douglas DC-2, had it converted to a bomber in Sweden, and made one operational mission in March 1940 against the Soviet Union with it.[4] Later the same year, as the Germans attacked the Netherlands, von Rosen with a Dutch KLM-crew flew a DC-3 with Dutch government documents to England and applied for service with the RAF but was turned down, on account of his family relation to Hermann Göring. Carl Gustaf von Rosen went on flying for the Swedish airline AB Aerotransport (ABA) from August 1940 until the end of the war.

Between 1945 and 1956 von Rosen worked in Ethiopia as the chief instructor for the Imperial Ethiopian Air Force.[5] Afterwards von Rosen was employed by the Swedish charter airline Transair. The company was engaged by the UN during the Congo Crisis 1960. Von Rosen also served as the pilot for the second Secretary-General of the United Nations, Dag Hammarskjöld. However, von Rosen was grounded by illness when Hammarskjöld was killed in an air crash while mediating in the Congo Crisis.

Von Rosen’s involvement in Africa did not end with the Congo Crisis. He gained international fame seven years later when he flew relief missions for aid organisations into war torn Biafra, a breakaway republic of Nigeria.[4] These flights included flying a DC-7 from São Tomé to Uli at only a little above sea level in August 1968.[6]

Disgusted at the suffering the Nigerian government inflicted on the Biafrans and the continuous harassment of international relief flights by the Nigerian Air Force, he hatched a plan in collaboration with the French secret service to strike back at Nigerian air power. He imported five small civilian single engine MFI-9 planes produced by Malmö Flygindustri, at that time owned by SAAB, which he knew could also be used for a ground attack role in warfare. He had the planes painted in camouflage colours and fitted with license manufactured 68 mm SNEB type rockets, and proceeded with a crew of two Swedes and two Biafrans to form a squadron called ‘Biafra Babies’ to strike the air fields from which the federal Nigerian Air Force launched their attacks against the civilian population in Biafra. On 22 May 1969, and over the next few days, von Rosen and his five aircraft launched attacks against Nigerian air fields at Port Harcourt, Enugu, Benin and other small airports. The Nigerians were taken by surprise and a number of expensive jets, including a few MiG-17 fighters and three out of Nigeria’s six Ilyushin Il-28 bombers, were destroyed on the ground.[7] The Igbo intellectual Fola Oyewole who fought for Biafra recalled of all the Westerners who served with the Biafrans that Rosen was the most idealistic and the one who cared about the Igbos as a people the most.[8]

Despite his controversial methods, Count von Rosen would later be remembered for his efforts to modernize relief efforts to remote conflict zones. One of the notable figures assisting Count Carl Gustav von Rosen was Lynn Garrison, an ex-RCAF fighter pilot. He introduced the Count to a Canadian method of dropping bagged supplies to remote areas in Canada without losing the contents: a sack of food was placed inside a larger sack before the supply drop. When the package hit the ground, the inner sack would rupture, but the outer one kept the contents intact. With this method many tons of food were dropped to many Biafrans who would otherwise have died of starvation. Later models of the Malmö Flygindustri MFI-9 became the SAAB MFI-15 Safari, with official modifications, developed from the Biafran concept, to facilitate the dropping of food supplies from underwing hard points. Von Rosen was utilizing this type in Ogaden when he was killed during a rebel ground assault. 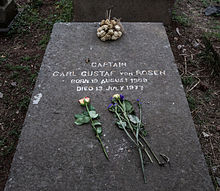 The last action Count von Rosen saw was again in Africa in 1977, during the Ogaden War between Ethiopia and Somalia. Again flying famine relief for refugees, he was killed on the ground on 13 July 1977, during a sudden Somali army attack in Gode at the outbreak of the war.[9][10]

He was buried in Gulale cemetery, Addis Ababa.