Obituaries  are claiming Michael McClure and other Beat Poets began the Summer of Love. They were the invited guests of the owners of The Oracle.  Michael Bowen appears to be the creator of this vision – that did not elect leaders of our Hippie Movement! We were not in need of leaders. McClure has been guilty of feathering his own nest. That the College of Arts and Crafts was founded by Frederick Meyer who was inspired by the Pre-Raphaelite artist and writer, William Morris, changes the Genesis of the Hippie and Bohemian scene in the Bay Area, and is more inclusive of Artists. J.R. Tolkien was inspired by Morris as was Joaquin Miller who I have depicted as Gandalf. The Hobbits inspired the lifestyle of the Hippies – who I renamed. The establishment newspaper put that name on us, and put their own ignorant spin on our new cultural movement.

McClure was of the previous era as was Ginsberg and Leary. Bowan had to know he too was on the way out, and thus he did not protest.  He had to know of BEAF that held shows around the corner of McClure’s classroom. I lived down the street on Broadway. Up Broadway were camped the Temescal Group of Artists and writers, including George Sterling, the ‘King of the Bohemians’ and co-founder of the Bohemian Club. The Great White Brotherhood proceeds the Beat poets – who should have know about seventeen year old Thelma Reid. My late friend was a good friend of McClure, Jim Morrison, and the Stackpole family. He went to CCAC.

In 1927, 17-year-old Thelma Reid had just begun her first year of college at UC Berkeley. She was living on 45th street in Oakland’s Rockridge district with her family and did many of the typical things a college coed did—went to class, helped around the house and did her homework. She never expected her studies would spawn one of the biggest scandals in Rockridge history. But then again, it wasn’t ordinary homework.

The collection of poems that would eventually set into motion police raids, arrests and a full-blown media circus was assigned to Reid not by any of her UC Berkeley professors, but by a neighbor, Gertrude Wright. Wright’s home, a few blocks away from Reid’s at 468 Forest Street, served as the international headquarters for a mystical society—called the “Great White Brotherhood”—that blended aspects of Eastern religion with notions of Christian love, racial harmony and communing with God through sexual acts. Reid had been attending one of Wright’s “Sacred Schools”—classes where Wright delivered her unconventional teachings and handed out writings advocating “sacred phallic laws” and “mystical marriages” in which both parties had absolute freedom to explore love in all its exotic forms. Reid’s mother discovered the poems in the family’s home, and referred them to the Oakland Police Department.

CCA was founded in 1907 by Frederick Meyer in Berkeley as the School of the California Guild of Arts and Crafts during the height of the Arts and Crafts movement. The Arts and Crafts movement originated in Europe during the late 19th century as a response to the industrial aesthetics of the machine age. Followers of the movement advocated an integrated approach to art, design, and craft. Today, Frederick Meyer’s “practical art school” is an internationally known and respected institution, drawing students from around the world.[2]

Michael Bowen (December 8, 1937 – March 7, 2009) was an American fine artist known as one of the co-founders of the late 20th and 21st century Visionary art movements.[1] His works include paintings on canvas and paper,[2] 92 intaglio etchings based on Jungian psychology, assemblage, bronze sculpture, collage, and handmade art books.[3]

An icon of the American Beat Generation and the 1960s counterculture, Bowen is also known for his role in inspiring and organizing the first Human Be-In in San Francisco.[4] Chronicled in books and periodicals reflecting on the turbulent 1960s, Bowen’s historical impact on both the literary and visual art worlds is well documented.[5] He remains influential among avant-garde art circles around the world.[6]

Michael Bowen was born December 8, 1937 in Beverly Hills to Grace and Sterling Bowen. His father was a dentist.[7] His mother’s lover was Benjamin (Bugsy) Siegel, affectionately known as “Uncle Benjie”, who would often take the youthful Bowen to not only the Flamingo Hotel on the Las Vegas Strip in Paradise, Nevada that he created, but also to the Sir Francis Drake Hotel near Union Square in downtown San Francisco. Bowen’s early romance with San Francisco established this city as his home base from which he would frequently travel to other places in the world.[8]

He started his art career at age 17, when he joined the American installation artist Ed Kienholz in his Los Angeles studio. There he met and joined with other influential Beat Generation artists including Wallace Berman, John Altoon, and Dennis Hopper. Bowen participated in the construction of the Ferus Gallery and Now Gallery created by Ed Kienholz[9] and curated by Walter Hopps.[10] Bowen attended the Chouinard Art Institute for several years during his formative artistic experiences in Los Angeles.[11]

Bowen’s grandmother, Alma Porter, was a member of The Theosophical Society in Ojai, California, where young Bowen was exposed to the significance of esoteric metaphysics and modern art.[8] In Los Angeles, teenage Bowen’s many visits to the mystical gatherings at Samson De Brier‘s house further solidified his early Asian philosophical studies.[citation needed]

In the late 50s and early 60s, Bowen continued his spiritual training and research. He investigated and practiced a variety of occult topics,[12] Eastern philosophies, and mysticism, and his artwork reflected these themes.[13][14] Bowen is often referred to as a mystic artist. As a lifelong student of the Bhagavad-Gita, Bowen’s entire career has emulated the spiritual warrior archetype of Arjuna, fighting for the Bill of Rights of the United States Constitution.[15] 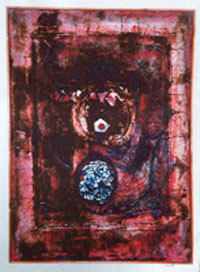 Michael Bowen moved to San Francisco in the late 1950s, and along with fellow artist comrades[16] Arthur Monroe[17] and Michael McCracken,[18] lived and worked out of 72 Commercial Street. Painting spontaneous, impromptu, hectic canvases, along with assemblage and collage, Bowen became an integral part of the San Francisco Renaissance.[citation needed]

The Norwegian art patron and physician Reidar Wennesland[19] befriended Bowen and many of his bohemian artist friends and collected their artwork.[20] Bowen’s work now makes up the majority of the paintings in the Wennesland Foundation Collection[21] located in Kristiansand, Norway, alongside many other important North Beach artists, such as Jay DeFeo.[22]

A 1963 painting of Janis Joplin by Bowen, along with his prophetic 1966 Love painting,[23] are examples of the Bowen works in the Wennesland collection.[24]

His style progressed from large abstract expressionist canvases to figuratives and large faces, to assemblage. Bowen’s painting about McCarthyism, Red Future? from the Wennesland Collection, was featured in the 1995 Whitney Museum exhibition Beat Culture and the New America, 1950-1965, which opened in New York City,[25] and then traveled to the Walker Art Center in Minneapolis and the De Young Museum in San Francisco, California.[citation needed]

In 1963, police brutality and persecution drove many of the Beat Generation writers, musicians, and artists out of San Francisco.[citation needed] Michael Bowen, along with many of his artist friends moved to an old Abalone Factory in Princeton by the Sea, where they lived and painted for many months. Bowen’s singer friend, Janis Joplin was a frequent guest at the Princeton Abalone studio.[26]

In 1963, on one of Bowen’s visits to be with his mentor in Tepoztlan, he was initiated into an ancient Aztec shamanic ceremony that inspired his future work with world consciousness transformation.[citation needed] After his initiation, Bowen traveled to New York City, where he established a studio in the Lower East Side and met with many of the Beat Generation artists, writers, and musicians living on America’s East Coast. He often visited the two former Harvard professors Timothy Leary and Ram Dass, then Richard Alpert, in their mansion at Millbrook, New York, where a new variety of consciousness experimentations were being conducted.[27]

Haight-Ashbury and the Summer of Love[edit]

In the summer of 1966, Bowen traveled back to San Francisco and established a studio/ashram in the middle of the newly burgeoning Haight-Ashbury neighborhood. Along with the poet Allen Cohen, Bowen co-founded the underground newspaper, San Francisco Oracle[28] that broadcast the 60s counterculture ideology. Bowen became the art director and let his studio become the offices for the Oracle,[29] while Cohen was the editor.[30]

As the S.F. Oracle guru, Bowen hosted the first underground press meeting at his studio at Stinson Beach.[31]

On October 6, 1966, Bowen and Cohen organized the Love Pageant Rally, a celebration against the new law criminalizing LSD in California. Because of Bowen’s friendship and invitation, Janis Joplin came to the event along with her band, Big Brother and the Holding Company, and played for free.[32] About 3,000 people attended the Love Pageant Rally, and towards the end, Ram Dass, Cohen, and Bowen discussed having another event, this time much bigger, to celebrate the newly developing hippie counterculture and consciousness expansion in San Francisco.[33][34]

The event the three counterculture leaders previously envisioned became the Human Be-In, which took place on January 14, 1967. The event was primarily organized by Bowen.[35][36] He created the poster promoting the event,[37] organized the city permit,[38] invited the Beat Generation speakers, including Allen Ginsberg, Gary Snyder, Lenore Kandel, Michael McClure, and Timothy Leary, and scheduled the San Francisco rock bands, including The Grateful Dead and Jefferson Airplane, who played for free at the event. The Hells Angels provided security, and a flatbed truck with amplification driven by a gas generator was donated to create a stage. The Human Be-In was a coming together of people for no other reason than to just “BE”; to make love, not war, to share and commune with new friends and to celebrate life.[39] The Human Be-In, sometimes referred to as a Love-In,[40] was specifically designed by Bowen to be imitated and to be remembered into the future.[41] As a lifelong fine artist, Bowen considers his creation of the Human Be-In to be performance art.[citation needed] This notion was confirmed by an Italian journalist, who calls Bowen “The father of performance art” for his Human Be-In creation.[42]