Bond Movie Canceled To November Due To Coroanvirus

When I did a painting of Rena Easton in 1972, I wanted to immortalize her. I believed if I did that, she would marry me. When I began my Bond novel, inspired by Rena, I wanted to make her a immortal, and, then she would marry me on the condition her rancher husband – was dead! In a letter Rena told me she and her husband were in poor health. I was concerned for both.

Five days ago I had a dream about a panther in a jungle. I awoke and composed another chapter for ‘The Royal Janitor’. Then I read John Rust’s concern for the homeless on facebook, and, have been distracted by the coronavirus. Yesterday, Barbara Broccoli to responsible for her movie. Did she read my lambasting in a Bond group? The death in Roseville is prompting officials to take a hard look at the cruise ship. It is suspect a thousand people have been exposed. History is going to record these lapses in reasoning as wishful thinking by people with much money and power who wanted to maintain the stutus quo – for selfish reasons! They threw the dice in hoe it would all go away. Wouldn’t that be great – for them!

If Ian Fleming depicted his agent as a man who will get to the truth by any means possible, then, I am the Real James Bond!

President: Royal Rosamond Press ‘A newspaper for the Arts’

I have been…..True to My Art! This Truth is recorded in this blog. I suffered for my art.

No Time To Die, the 25th James Bond film, has had its release pushed back to November due to the current coronavirus outbreak.

In a statement via the film’s Twitter, “MGM, Universal and Bond producers, Michael G. Wilson and Barbara Broccoli, announced today that after careful consideration and thorough evaluation of the global theatrical marketplace, the release of NO TIME TO DIE will be postponed until November 2020. The film will be released in the U.K. on November 12, 2020 with worldwide release dates to follow, including the US launch on November 25, 2020.”

Greg Presco Is saving hundreds from certain death the real concern here? Or, is the loss of a billon dollars in ticket sales the real motive? Can there be a co-motive? How about a co-conspiracy, where it would look bad for Broccoli and the board to ask for a delay because of coronavirus? How many members of the community are we talking about? A million? Five? What about the cut the theatres take – and the venders? Are there contracts? This is par for the course for this movie. Nothing has gone right, or, as it should be. This film – is cursed – and that is bad publicity, which is a Hollywood invention. Are we looking at another publicity stunt that so far is based upon the little people wanting the big people to rake in the big bucks, as if this was some kind of sporting contest. Team Bond must win – at all costs! Why not premiere it on cable? There goes the popcorn, soda, and candy sales! What about the janitors? I feel like we are in China, or North Korea. Let our happy community break out in praise of our golden leader. “”With the Coronavirus [COVID-19] reaching pandemic status, it is time to put public health above marketing release schedules and the cost of cancelling publicity events.”

Jerry Rust Greg Presco the fat old ones? I have other priorities to worry about. Be my guest to monitor this by all means.

Greg Presco I have a blog newspaper and wiil start covering this like I did the fake Patriots who gathered at post office in Springfield 12 years ago. The tea party was started by end time evangelicals who put Trump in office. I want to help author a paper that will be presented to every city council in Oregon giving them a clear picture of our grassroots concerns so there will be no wondering if we are going to get help from above. Republicans hate Orgonians and will put us last in line. Our Patriot Plan will be the plan for other states who are also being kept in the da

The Rieckmanns are about $300,000 in debt, and bill collectors are hounding them about the feed bill and a repayment for a used tractor they bought to keep the farm going. But it’s harder than ever to make any money, much less pay the debt, Mary Rieckmann says, in the yellow-wallpapered kitchen of the sagging farmhouse where she lives with her husband, John, and two of their seven children. The Rieckmanns receive about $16 for every 100 pounds of milk they sell, a 40 percent decrease from six years back. There are weeks where the entire milk check goes towards the $2,100 monthly mortgage payment. Two bill collectors have taken out liens against the farm. “What do you do when you you’re up against the wall and you just don’t know which way to turn?” Rieckmann says, as her ancient fridge begins to hum. Mary, 79, and John, 80, had hoped to leave the farm to their two sons, age 55 and 50, who still live with them and run the farm. Now they’re less focused on their legacy than about making it through the week.

In the American imagination, at least, the family farm still exists as it does on holiday greeting cards: as a picturesque, modestly prosperous expanse that wholesomely fills the space between the urban centers where most of us live. But it has been declining for generations, and the closing days of 2019 find small farms pummeled from every side: a trade war, severe weather associated with climate change, tanking commodity prices related to globalization, political polarization, and corporate farming defined not by a silo and a red barn but technology and the efficiencies of scale. It is the worst crisis in decades. Chapter 12 farm bankruptcies were up 12 percent in the Midwest from July of 2018 to June of 2019; they’re up 50 percent in the Northwest. Tens of thousands have simply stopped farming, knowing that reorganization through bankruptcy won’t save them. The nation lost more than 100,000 farms between 2011 and 2018; 12,000 of those between 2017 and 2018 alone. 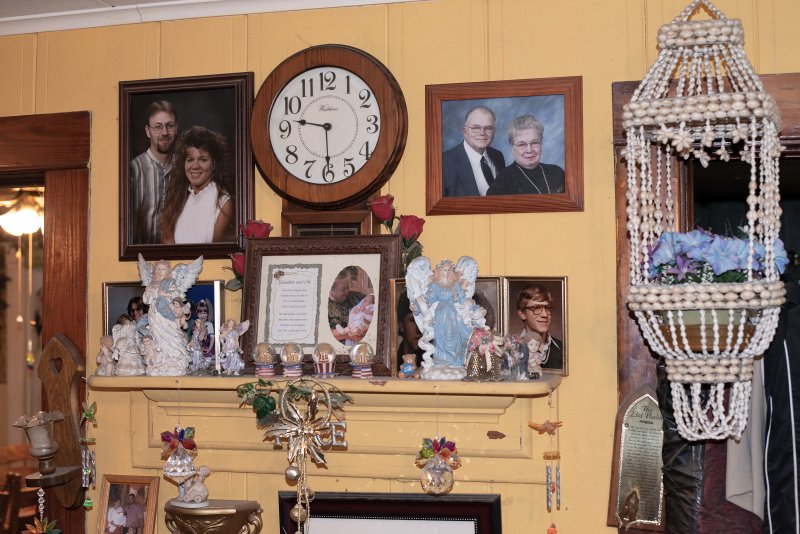 The Rieckmann’s mantle in their home in Fremont, Wisconsin, on Nov. 20, 2019.
Jason Vaughn for TIME

Farm debt, at $416 billion, is at an all-time high. More than half of all farmers have lost money every year since since 2013, and lost more than $1,644 this year. Farm loan delinquencies are rising.

1 Response to Bond Movie Canceled To November Due To Coroanvirus