The No.1 topic in this blog is my accusation the Christian-right has used the Tribulation as a Terrorist Weapon to get more Americans to believe in their Doomsday Jesus, become Republicans – and vote the Democrats all to hell!

“Do it to the Democrats – not us!” has been the rallying cry of Big Brother For Jesus in the real 1984 where the Trumpire conducted Orwellian news conference, where the Christian- right present their Wish&Prayer List which wanted to make it all go away. Evangelical Leaders were very concerned about the Coronavirus hurting the economy and thus they and the Trumpire will lose the coining election. The idea that Jesus was going to help everyone deal with a possible pandemic – flew out the window – and the market did a tail-dive, because Stock Investors are not – IN CHURCH! They making a living reading the writing on the wall.  DRATS! Foiled again – by the Truth!

God is the Truth!

These hypocrites, liars, and blasphemers – are all for the Tribulation – as long as it does not involve them. To see the President and his Cabinet try to wiggle his way out of the very prophecy that put them in power – does spell DOOM!

Note the sun rising between the two towers in the DEATH card. Note the dead on the ground. This tarot card is inspired by The Plague.

“How the mighty have fallen!”

When Donald Trump Jr said Democrats hope coronavirus “kills millions of people” in the US because they want to bring his father down, he was merely “pushing back” at politicisation of the viral outbreak by Trump opponents, Mike Pence claimed in an interview broadcast on Sunday. 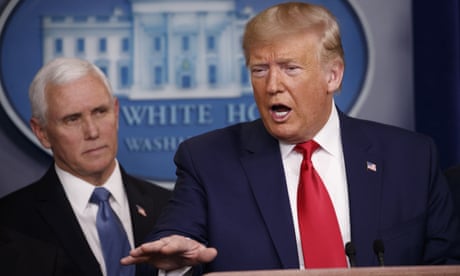 Here, we see Death riding a beautiful white horse while holding up a black flag with a white pattern. It is portrayed as a living skeleton, the bones being the only part of the human body existing after death. He wears armor, which gives him his invincibility – signaling that no one can destroy Death. The white horse that he rides stands for purity, as Death purifies everyone. Beneath him, all classes of humans lie in the dirt – a king, and a pauper, meant to remind us that death does not differentiate between class, race, gender.

“It’s time for the other side to turn down the volume,” the vice-president told NBC’s Meet the Press.

At a White House press conference on Saturday, Trump was forced to defend his use of the word “hoax” in reference to the outbreak. Harshly criticised by contenders for the Democratic presidential nomination, the president said he had been referring to politicisation of coronavirus, not the outbreak itself.

In the interview broadcast on Sunday, NBC host Chuck Todd played Pence clips of Trump allies discussing the outbreak which on Saturday claimed its first US death, a man in Washington state.

Rush Limbaugh, the conservative shock jock to whom Trump gave the Presidential Medal of Freedom, said: “The coronavirus is being weaponized, as yet another element to bring down Donald Trump.”

Republican National Committee chair Ronna McDaniel said: “Democrats are using this for their political gain to try and stoke fear in the American people, which is shameful, wrong, and I think un-American.”

And Donald Trump Jr, appearing on Fox News, said: “For them to try to take a pandemic and seemingly hope that it comes here and kills millions of people so that they could end Donald Trump’s streak of winning is a new level of sickness.”