I took my Old Man Nap around three today, and had the saddest dream I ever had. I went to Roseville and was looking for something. I was in Melba Charlotte’s garage. I found her son’s old fishing pole that looked like the one I bought at Goodwill. I climbed up to a loft and found some old rusty bicycles. I looked down on my father’s mother and asked if I could have them. I expected to hear her say “No!” But she was saying there is no one left who would want them, so, they’re years. I started to pull them apart, when I heard;

“What are you looking for my brother?”

I looked down and saw my sister Vicki.

“I’m looking for you. I have been so utterly alone since you went away!”

I climbed down the ladder, and we hugged each other, hard. I began to cry from a very deep place.

“All the time we lost that we could have been together. All that time, gone. Let us spend all our remaining days together.”

I awoke…….all alone. I believe all members of my natal family, are dead. I had been researching the Stuttmeisters and found mention they descend fron Teutonic Knights. The street they lived on may the esplanade hat Napoleon rode down with him army after he defeated the Prussian Army. Then, I googled the sculptor who rendered the image that looks over the Stuttmeisters. This image was based upon the statue done by Bertel Thorvaldsen, the ancestor of my ex-wife, Mary Ann Thorvaldsen.

I said to myself, the Stuttmeisters lived in Charlottenburg Castle. They have royal blood. You are home! You have prevailed…..Parzival!

I did some more research and found Sophia Dorothea – and was blown away by her insane and brutal husband who thwarted her attempt to unite Britain and Prussia via a marriage of her children. Sophia looks like Melba.

For several days I have been considering what I would say to my new therapist on the first day. I considered not going. Who would believe me? The fight over the Presco Children – is still raging! I have looked at this being passed in our DNA.  Hohenzollern Castle was built to impress many people. We capture beauty. I had concluded I and my three siblings were not told who the Stuttmeisters were because it would stir up the old hornet’s nest. Victor Stuttmeister went to Germany during WW 1, and died fighting for the Germans. His body was shipped home across the sea.

Fighters and Ritters – with an occasional Artist to be our Witness!

The Christus was not well known outside of Denmark until 1896, when an American textbook writer wrote that the statue was “considered the most perfect statue of Christ in the world.

Berlin-Mitte (Mitte district of Berlin, Mitte district), Dorotheenstadt cemetery, Chausseestrasse 126 (see above); Grave system of the Stuttmeister family, owner of chivalry from Charlottenburg, built in 1890 from granite, grave wall with a round-arched niche in a columnar pedicel (aedicule niche) and Christ figure made of bronze based on the design by the Berlin sculptor Julius Moser (1832-1916) based on the famous Christ figure from 1839 by the sculptor Bertel Thorvaldsen (1770-1844) in the Frauenkirche in Copenhagen;

The street connects the Dolomitenstraße with the Berliner Straße. It was created in 1874 by the Charlottenburg manor, Stuttmeister, who owned the property. The route does not yet have a name on a map from 1877. A free space at the end of the esplanade was projected as Wilhelmplatz in 1892. The street forms the border to the Pankow district. At the western end, a pedestrian tunnel under the tracks connects the Esplanade with Grüntaler Straße in the Gesundbrunnen district. Until the turning point , several foreign diplomatic missions were based in the GDR.

Esplanade, a French term for a large open space or forecourt, as found between rows of houses or between fortifications and the associated city. In 1874 the road was created by the knight’s owner Stuttmeister (Charlottenburg), who probably owned this terrain. The route is still shown on the map from 1877 without a name. Originally, a free space, called Wilhelmplatz on a map from 1902, was to be created at the end of the esplanade. On that map, the esplanade also runs at a right angle. The north-facing piece, which was only projected like Wilhelmplatz, was not added to the esplanade, but was later given the name Trienter Strasse. The south side of the esplanade now belongs to Prenzlauer Berg, the north side to Pankow.

The Ober-Stallmeister (German: Oberstallmeister – literally “senior head of the stable“) was a post (rank) in the Tsardom of Russia and the Russian Empire, from February 4, 1722 – a court rank of the 3rd class in the Table of Ranks[1] (in 1766 it was moved to the 2nd class of the table[2]).

Like other court officials, abolished after the February Revolution – from March 17, 1917, in connection with the liquidation of the institution of imperial power.

Fedor Alexander Gustav von Rauch (8 August 1822 – 15 January 1892) was a cavalry officer in the Prussian Army and son of Gustav von Rauch. Born in Berlin, he was ‘Oberstallmeister’ (chief equerry) on the privy councils of William I, Frederick III and Wilhelm II. He also took a major part in horse breeding and racing, becoming vice-president of the Union Club in Berlin (modelled on the British Jockey Club).

The National Leadership of the Order

The order was divided in three national chapters, Prussia, Livland
and the territory of the Holy Roman Empire Highest officer of each
chapter was the Landmeister (country master). They were elected by
the regional chapters. In the beginning, they were only substitutes
of the Hochmaster but were able to create a power of their own.
Within their territory, the Hochmeister could not decide against
their will. In the end of the rule over Prussia, factual, the
Hochmeister only was Landmeister of Prussia. There were three

* The Landmeister of Prussia…………………..since 1309 united with the office
of the Hochmeister, who was situated in Prussia since then.

For the statue of Jesus in Indianapolis, Indiana, see Christus (Indianapolis). 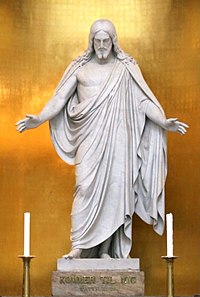 The original statue at the Church of Our Lady, Copenhagen.

Christus (also known as Christus Consolator) is a 19th-century Carrara marble statue of the resurrected Jesus by Bertel Thorvaldsen. Since its completion in 1838, the statue has been located in the Evangelical Lutheran Church in Denmark‘s Church of Our Lady in Copenhagen, Denmark. In the 20th century, images and replicas of the statue were adopted by the leaders of The Church of Jesus Christ of Latter-day Saints (LDS Church) to emphasize the centrality of Jesus Christ in church teachings.

The Christus was not well known outside of Denmark until 1896, when an American textbook writer wrote that the statue was “considered the most perfect statue of Christ in the world.”[2][non-primary source needed][dubious – discuss]

Use by the LDS Church[edit]

In the 1950s, Stephen L Richards, an LDS Church apostle, purchased a 3.4-metre (11-foot) replica of the Christus and presented it to church president David O. McKay. In 1966, the statue was placed at the church’s Temple Square in Salt Lake City, Utah. The church’s second Christus replica was created to be displayed in its pavilion at the 1964 New York World’s Fair. The display of the replica “was intended to help visitors understand that Latter-day Saints are Christians”.[3]

Since the display of the Christus at the World’s Fair and at Temple Square, the church has created replicas of the statue and displayed them in visitors’ centers near LDS temples in Hamilton, New Zealand; Laie, Hawaii; Los Angeles, California; Mesa, Arizona; Mexico City; Nauvoo, Illinois; Oakland, California; Palmyra, New York; London, England; Portland, Oregon; Rome, Italy; St. George, Utah; Washington, D.C.; Paris, France; São Paulo, Brazil; and Provo, Utah.[3][4] Replicas are also on display at the church’s visitors’ centers at the Hill Cumorah and in Independence, Missouri.[4] The church uses the image of the Christus on its webpages and in other official publications.[4]

A full-size replica of the Christus is located in The Johns Hopkins Hospital in Baltimore, Maryland; the hospital refers to the statue as Christus Consolator.[5]

A replica is located at Forest Lawn Memorial Park in Glendale, California in “The Court of the Christus” on Cathedral Drive.[6]

In 2009, a six-foot Christus replica was built out of 30,000 white Lego pieces by parishioners of a Swedish Protestant church in Västerås.[7]

Another copy of the statue is in front of the Friedenskirche in Potsdam, which was built from 1845-1854.

An additional replica of Bertel Thorvaldsen‘s Christus statue is found in the church of Sankt Petri Stavanger, Norway where it has been on display since 1853.

One replica is in the Koranda Congregation Chapel of the Evangelical Church of Czech Brethren in the Czech city of Pilsen.