My Puritan ancestors banned Christmas that had become a drinking game.

I wish the Windsor family well. 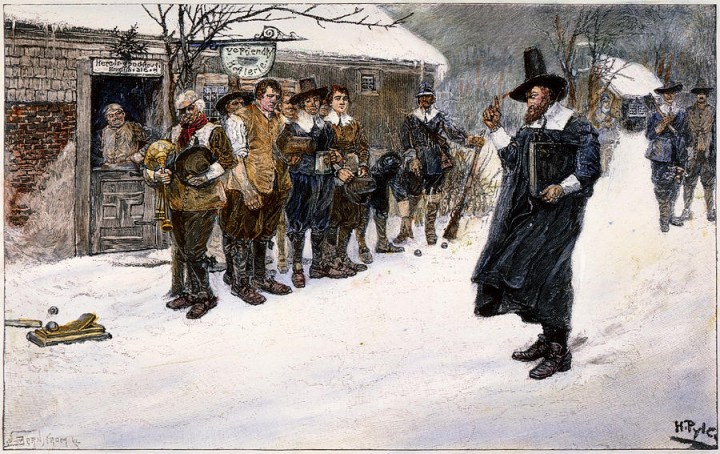 A short, easily-overlooked paragraph from an early law book of the Massachusetts Bay Colony reads as follows:

“For preventing disorders arising in several places within this jurisdiction, by reason of some still observing such festivals as were superstitiously kept in other countries, to the great dishonor of God and offence of others, it is therefore ordered by this Court and the authority thereof, that whosoever shall be found observing any such day as Christmas or the like, either by forbearing of labor, feasting, or any other way, upon such accountants as aforesaid, every person so offending shall pay of every such offence five shillings, as a fine to the county.”

Yes, you read that right. In 1659 the Puritan government of the Massachusetts Bay Colony actually banned Christmas. So how did one of the largest Christian holidays come to be  persecuted in the earliest days of New England?

Christmas in  17th century England actually wasn’t so different from the holiday we celebrate today. It was one of the largest religious observances, full of traditions, feast days, revelry and cultural significance. But the Puritans, a pious religious minority (who, after all, fled the persecution of the Anglican majority), felt that such celebrations were unnecessary and, more importantly, distracted from religious discipline. They also felt that due to the holiday’s loose pagan origins, celebrating it would constitute idolatry. A common sentiment among the leaders of the time was that such feast days detracted from their core beliefs: “They for whom all days are holy can have no holiday.”

This meant that Christmas wasn’t the only holiday on the chopping block. Easter and Whitsunday, other important historical celebrations, were also forbidden. Bans like these would continue through the 18th and 19th centuries (the US House of Representatives even convened on Christmas in 1802). As Puritanism started to fall out of favor, however, Christmas was almost universally accepted throughout the US by 1840, and was eventually declared a National Holiday in 1870.