Crimea’s Chief Prosecutor Natalia Poklonskaya (C) carries an icon with a portrait of the last Russian tsar Nicholas II as she takes part in the Immortal Regiment march during the Victory Day celebrations in Simferopol, Crimea, on May 9, 2016.
/ AFP PHOTO / Max Vetrov

These are the three ugliest works of our time……..

You will find these words in this bad news.

My evangelical neighbor said I have no friends in the complex, and, she has been in touch with my daughter, which, I heard thus;

“We are in touch with your daughter, and she agrees with us, you should be locked up. So does Belle and Alley Valkyrie!”

When other neighbors came to my door, they shouted I should be locked up. I suspect some are connected with Christian Militias. I suspected Rea Easton was being pressured by Radical Christians. Kim Haffner said I called Christians “Nazis” while in her car – any times! She lied. She read my blog.

I was going to use my fictional character, Victoria and Miriam, to show my readers why Putin and his Orthodox church is warring with the people of the Ukraine, and the breakaway church. I believe Trump has been filled in on this by Franklin Graham and Tony Perkins. Jeff Sessions was doing missionary work in Russia. He needs to be questioned at the Senate Trial along with all the people Trump and Putin protect.

How deep and expansive is the Manhattan Declaration that I am sure Matthew Shea has read. Reporters can get murdered over this. I take all threats made against me – very seriously! I have talked to the FBI about these anarchists who believe they only need follow special laws and rules, tailormade for them.

Republican state Rep. Matt Shea, pictured at a gun rights rally in January, has been suspended from the House Republican Caucus and removed from several committees.

Six-term Washington state Rep. Matt Shea is accused of participating “in an act of domestic terrorism against the United States,” according to a report released Thursday.

Independent investigators commissioned by the Washington State House of Representatives found that Shea, as a leader of the Patriot Movement, “planned, engaged in, and promoted a total of three armed conflicts of political violence against the United States government” between 2014 and 2016.

The report also concluded that Shea was involved in training young people to fight a “holy war.” He created a pamphlet called Biblical Basis for War and advocated replacing the government with a theocracy and “the killing of all males who do not agree.”

Following the release of the report, Shea was suspended from the House Republican Caucus — a serious form of discipline.

He was also stripped of his position as the ranking member of the House Environment and Energy Committee and will be removed from two committees.

Catch up on the latest headlines and unique NPR stories, sent every weekday.

“He cannot use House Republican staff, he cannot meet with the caucus, his office will be moved,” Wilcox added.

But late Thursday, Shea said he will not resign.

“Like we are seeing with our President this is a sham investigation meant to silence those of us who stand up against attempts to disarm and destroy our great country,” Shea said in a Facebook post. “I will not back down, I will not give in, I will not resign.”

Shea maintains he was not given an opportunity to review or respond to the report.

The report states he declined to be interviewed as part of the four-month investigation.

The Army veteran was a public supporter of Cliven Bundy, a Nevada rancher who led a 2014 standoff with FBI agents in a dispute over grazing rights.

According to investigators, Shea visited the Bundy Ranch in Bunkerville for a couple of days. While there, he “developed a strategy for leadership over future Patriot Movement armed resistance against the federal government by creating” a coalition of western state leaders from Idaho, Washington, Arizona and Nevada.

The Patriot Movement is a far-right, anti-government extremist group, according to the Southern Poverty Law Center. A core tenet is that the government should not own public lands.

About two months after the Bundy Ranch standoff, the report notes a meeting between Shea and leaders of the Oath Keepers Militia at a restaurant in Spokane. There he was overheard discussing “militias, weapons, stockpiling ammunition, the Bundy Ranch, Special Forces and snipers.” 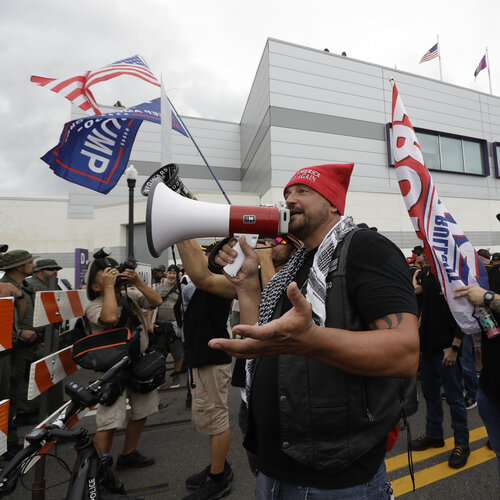 Politics Shape The Debate Over What To Call Far-Right Extremism

Previously unknown is Shea’s involvement in the 2015 armed conflict with the U.S. Veterans Affairs Department in Priest River, Idaho.

When VA officials planned to remove weapons from the home of a veteran who was flagged by health care officials, Shea issued a call to action for Patriot Movement members. In a Facebook post, he urged them to arm themselves and drive to Priest River.

“That resulted in the use of armed militia members who blocked access to the veteran’s home and prevented the lawful retrieval of the guns by the Veterans Administration,” the report said.

In early 2016, Shea again teamed up with the Bundy family in an armed takeover of the Malheur National Wildlife Refuge in Oregon.

The 41-day standoff between armed militia men and government officials resulted “in devastating financial, physical and emotional harm to a community and its residents; and the loss of one life.”

At the time, Shea said he had gone on a “fact-finding mission.”

State Rep. Laurie Jinkins, a Democrat, said the House needed time to review and digest the full report prior to taking further action.

She added: “In its 130-year history, I am unaware of House members ever having received such a comprehensive and disturbing investigatory report about another member.”

The gravity of the findings prompted the Chief Clerk’s Office to forward the report to the U.S. Attorney’s Office and the FBI, Jinkins said.

“We respect Rep. Shea’s right to free speech and his personal beliefs, but those ideals are not what this is about,” she added. “This is about a state lawmaker who, according to the investigative findings, engaged in an act of domestic terrorism rather than choosing political or legal avenues to change laws and policies he disagrees with.”

Shea could be removed from the state House entirely but that would require a two-thirds majority vote of House members, and, the nonprofit news site Crosscut reports, that “has happened only once in the history of Washington’s Legislature.”