Why I Moved To Springfield

“In a Facebook post, demonstrators said they will gather at plaza outside the Lane County Courthouse before heading inside to the Eugene City Council meeting, which starts at 7:30 p.m. in Harris Hall.

Here’s what we know so far about what happened Friday:

Three months ago, I ran into a neighbor that was acting aloof. I asked him if he and his wife were reading my blog. He said no. I had shown them my blog two years ago. The wife is a ameteur writer.

Yesterday, I saw this guy with a new dog. I asked the dog’s name, and then why he was acting unfriendly. He accused me of something very outrageous. I asked him what my motive was for my behavior. He could not give me one. Then I wondered if he was violating my Copyright.

Most Republicans, and the lawmakers they put in office, are saying the Democrats are making everything up and they will say anything to get the President.  I have famous people in my family tree. This is stalking. Trump is good friends of the owner of The National Inquirer. Parasites make up stories about famous people and their families in order to make their dull life a part of the folks in the news. They write books.

When Kim Haffner and two neighbors said I should be locked up because I was a lunatic, I asked them their motive. Did I do anything to them, or, exhibit behavior that caused them some real concern – FOR ME! Why didn’t they call Cahoots, or dial 911. Cheryl asked me to call 911 when she came to my door. Why didn’t she dial them herself – in her appartment! What was her motive for getting me involved. I had Kim Haffner call her.

Kim worked many years at the Johnson Unit in the psych ward with patients who were having a mental health crisis. Cheryl was taken to the Johnson Unit. Why didn’t Haffner follow her training, and get help – FOR ME? Why weren’t the police called? If these people thought I was severely mentally ill, why would they mock me, and laugh at me, and provoke me – and recite the names of people who were harassing me and terrorizing me……like Alley Valkyrie who sent me this warning. EPD never heard of me. She posted this on her facebook and has many homeless friends who are mentally ill. This cunning witch is removing police protection and giving her lunatic base permission to administer vigilante justice. Threats on my life followed because I was escaping justice. I showed this to two Springfield Police Officers – inside my home. I called the FBI a couple of days later. Kim knows how to manipulate lunatics – like a pro!

Take note of the sign hung around the neck of Ken Kesey the author of ‘One Flew Over The Coo-Coos Nest’. Alley Valkyrie and SLEEPS took over Kesey Square and held REVIVAL gatherings. This is why they sent Belle to meet with me. They wanted my – living approval! That’s Alley playing a instrument. She believed she was The Queen of Downtown. Kim Haffner thought she was The Queen of McKenzie Meadows. Both lunatics got their gang to go after me. This will make a great book! The Downtown Crazies formed a human shield around their champion, Jeffrey Don Walton, who was arrested in California for inserting a coke bottle in the vagina of a fifteen year old girl. This is why he was supposed to register as a Sex Offender when he moved to Oregon. Will President Trump, who claims he is above the law, be ordered to register as a Sex Offender, when Justice is served?

As predicted by me, society is crumbling around us. Am I a true prophet, or, did I get powerful clues from the citizens of Lane County? As a art historian I know Alley’s Crew is defacing a public work of art by hanging their advertisements around his neck, nd thus altering the original message the sculptor and the Kesey family intended. I did muster the courage to go downtown to a City Hall meeting where I and Zane Kesey objected to the take over of Ken Kesey Square by the homeless, and their leaders, they never got a chance to vote for.

“Alley Valkyrie; ” I will also say that going downtown would be a mistake, as EPD is quite aware of who and what you are, and they have nine uniformed officers downtown. But then again, you said you were going to City Council and you didn’t have the balls to do that, and…See More

Alley Valkyrie: And if you do go downtown, you will have to deal with me personally, by the way.”

The jail said 29-year-old Jeffery Don Walton was arrested in July for failing to register as a sex offender and delivering marijuana to a person under 18. 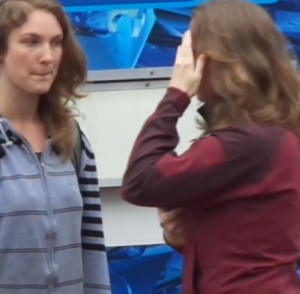 Six months ago, Kim Haffner, ordered me back in my appartment when I emerged. She had riled up our neighbors, filled them with lies. She told me, and them, Alley Valkyrie warned her about me. I called up EPD five years ago, and they have no record on me. I have no arrest record. This lunatic posted vile lies on her facebook in order to incite her friends to commit acts of violence upon my person. This admitted witch is telling many of her homeless friends they would be helping the police if they confront me and make me afraid. This is what TERRORIZM looks like!

There is mention of how powerless the police are to stop me from stalking women – which is a lie! Alley claims I am going to have to deal with her “personally” but then gets many to volunteer their assistance. One owns a armed…