Mary White Ovington and The Ring

When Eric Richardson ragged on Walt Disney, I knew about Mary Ovington being influenced by my Hero, William Morris, the Pre-Raphaelite. Tolkien was very inspired by William Morris, who ragged on Walt the “poor boob”. In 1969 I declared myself a New Pre-Raphaelite, and let my hair grow real long. The Evil Lord of Modor is stomping around Europe today, and no one has a clue how to stop him. I got more than a clue! How about Eric, and the NAACP?

Is there a movement in the Democratic Party to move white people to the curb, and let the Woman of Color parade, march by?  We have to be on the same team, and may not know what our team looks like. We can do as many restarts as we need. We may end up with a fantastic new look!

Mary White Ovington (April 11, 1865 – July 15, 1951) was an American suffragist, journalist, and co-founder of the National Association for the Advancement of Colored People (NAACP).[1]

Mary White Ovington was born April 11, 1865 in Brooklyn, New York. Her grandmother attended the Connecticut congregation of Samuel Joseph May. Her parents, members of the Unitarian Church were supporters of women’s rights and had been involved in anti-slavery movement. Educated at Packer Collegiate Institute and Radcliffe College, Ovington became involved in the campaign for civil rights in 1890 after hearing Frederick Douglass speak in a Brooklyn New York City church and a 1903 speech by Booker T. Washington at the Social Reform Club.

In 1895 she helped found the Greenpoint Settlement in Brooklyn. Appointed head of the project the following year, Ovington remained until 1904 when she was appointed fellow of the Greenwich House Committee on Social Investigations. Over the next five years, she studied employment and housing problems in black Manhattan. During her investigations, she met W.E.B. Du Bois and was introduced to the founding members of the Niagara Movement.[2]

Ovington joined the Socialist Party of America in 1905, influenced by the ideas of William Morris where she met A. Philip Randolph, Floyd Dell, Max Eastman and Jack London, who argued racial problems were as much a matter of class as of race. She wrote for journals and newspapers such as The Masses, New York Evening Post, and the New York Call. She also worked with Ray Stannard Baker and influenced the content of his book, Following the Color Line, published in 1908.

On September 3, 1908 she read an article written by Socialist William English Walling, entitled “Race War in the North” in The Independent. Walling described a massive race riot directed at black residents in the hometown of Abraham Lincoln, Springfield, Illinois that led to seven deaths, the destruction of 40 homes and 24 businesses, and 107 indictments against rioters. Walling ended the article by calling for a powerful body of citizens to come to the aid of blacks. Ovington responded to the article by writing Walling and meeting at his apartment in New York City along with social worker Dr. Henry Moskowitz. The group decided to launch a campaign by issuing a call for a national conference on the civil and political rights of African-Americans on the centennial of Lincoln’s birthday, February 12, 1909.[2]

Ovington remained active in the struggle for women’s suffrage. She was also a pacifist who opposed the United States’s involvement in the First World War. During the war Ovington supported A. Philip Randolph and his magazine The Messenger, which campaigned for black civil rights.[3] 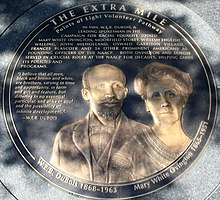 After the war, Ovington served the NAACP as board member, executive secretary, and chairman. She inspired other women to join the NAACP, and in so doing, made a significant contribution to the multi-cultural composition of the organization.[5] NAACP fought a long legal battle against segregation and racial discrimination in housing, education, employment, voting, and transportation. They appealed to the Supreme Court to rule that several laws passed by Southern states were unconstitutional and won three important judgments between 1915-1923 concerning voting rights and housing.

In June 1934, Mary White Ovington gave speeches to 14 different colleges. Her goal was to show the youth that the NAACP association was made up of blacks and whites, specifically to show black youth that there were whites who hated race oppression. [3] During her speeches, Ovington would show the geography of all the NAACP location branches and how far the association has come. “They should know the power the race has gained” – Mary White Ovington[6]

The NAACP was criticised by some members of the African American community. Members of the organization were physically attacked by white racists. John R. Shillady, executive secretary of the NAACP, was badly beaten up when he visited Austin, Texas in 1919.

Ovington wrote several books and articles, including a study of black Manhattan, Half a Man (1911); Status of the Negro in the United States (1913); Socialism and the Feminist Movement (1914); an anthology for black children, The Upward Path (1919); biographical sketches of prominent African Americans, Portraits in Color (1927); an autobiography, Reminiscences (1932); and a history of the NAACP, The Walls Came Tumbling Down (1947).

Ovington retired as a board member of the NAACP in 1947, ending 38 years of service with the organization. She died on July 15, 1951. Mary White Ovington I.S.30 Middle School in Brooklyn was named in her honor. She is one of the persons named on The Extra Mile—Points of Light Volunteer Pathway National Memorial in Washington, D.C. In 2009 she was depicted on a United States postage stamp with Mary Church Terrell.[7]

Mary White Ovington was forced to resign from the NAACP due to poor health. In her eighties, Ovington spent her final years with her sister in Massachusetts and in 1951 died in Newton Highlands, Massachusetts, at the age of 86. Ovington also wrote novels and children’s books, including Hazel, which told the story of a young Boston Black girl spending a winter in Alabama at the turn of the century.[8]

1 Response to Mary White Ovington and The Ring