I saw all this coming – whatever it is! I was made out to be insane. My daughter joined in.

“I’m just a small town prophet who likes to grow vegetables. Sometimes when I’m staking my tomatoes, a light comes down on me from above!”

TRAITORS! Instead of concentrating on the Kurdish crisis, Traitor Trump went after the Bidens – and all Democrats.

“We chose the latter path, which seemed to all of us — Secretary (Rick) Perry, Ambassador (Kurt) Volker, and myself — to be the better alternative,” Sondland continues. “But I did not understand, until much later, that Mr. Giuliani’s agenda might have also included an effort to prompt the Ukrainians to investigate Vice President Biden or his son or to involve Ukrainians, directly or indirectly, in the President’s 2020 reelection campaign.”
Sondland’s testimony Thursday comes as he’s under fire for his role in the July 25 call between Trump and Zelensky, in which Trump repeatedly urged Zelensky to open an investigation into the Bidens. Sondland’s testimony is likely to ratchet up the Democrats’ focus on the concerns top officials expressed about Giuliani’s involvement in Ukraine — and how they disagreed with Trump’s assistance on using his private attorney to negotiate diplomatic efforts. 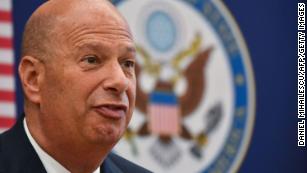 ‘Forceful, blunt and undiplomatic’: the ambassador now at the center of the impeachment probe
Sondland’s text messages with top US diplomat in Ukraine, Bill Taylor, are a key data point for the impeachment investigation, in which Sondland told Taylor there was “no quid pro quo” after speaking to Trump about the matter.
Sondland’s testimony says that he knew of no arrangement tying US security assistance to Ukraine with an investigations into the Bidens — but also that it would be wrong to do so.
“Let me state clearly: Inviting a foreign government to undertake investigations for the purpose of influencing an upcoming U.S. election would be wrong,” Sondland will say. “Withholding foreign aid in order to pressure a foreign government to take such steps would be wrong. I did not and would not ever participate in such undertakings. In my opinion, security aid to Ukraine was in our vital national interest and should not have been delayed for any reason.”
https://rosamondpress.com/2014/03/10/24094/

Former British Ambassador, Kim Dorach, said President Trump sabotaged President Obama’s treaty with Iran – out of spite! Yesterday I said the Republican Party is poised to declare war on Iran and the Democrats,who by majority vote defeated the Republicans in two elections. Hillary got MORE votes than Trump who may have vowed to undo all that Obama did – if he got elected! This suggests the Trumpites wanted to put an end to our bond with the European Union – by dividing the United States.

The Red State Union with Brexit Leader, Boris Johnson, replicates the business deals the Confederacy had with Britain before the Civil War. This reeks of Neo-Confederatism – a new word! We know Neo-Confederates and Neo-Nazis were outraged that a black man was elected President. Dorrach said;

“was “set upon an act of diplomatic vandalism, seemingly for ideological and personality reasons — it was Obama’s deal.”

I have claimed I am a Seer and a Prophet. Who saw this day coming? I did. I have filled this bog, Royal Rosamond Press, with the visions of portence, after Rena Easton had Deputy Sheriff, Dan Wayand, call me from Bozeman Montana. I immediately wondered if this had something to do with Rena’s late husband, Commodore Sir Ian Easton, who headed the British Defence Staff that I tried to contact two years ago. So believing in my visions of a cataphoric time to come, that I began my Ian Fleming novel and script starring a woman based upon Rena Easton, and, perpetuated by my model and muse, Lara Roozemond. Elizabeth Rosemond Taylor is my cousin in the Rosamond Family Tree. Dame Taylor is now my Historic Muse, that will………….carry on!

There are around 350 Alumni of the British Defence Staff in the United States. Where will they stand in the Boris-Trump union? I am prepared to call for a boycott of all British goods, if I see any attempt to hurt the Democratic Party. I am a Republican candidates for the office of the President of the United States.

We are – IN CIVIL WAR. Families have been divided by the Tea Party Traitors who ideologue pretended to bring back Patriotism. But the only patriots they recognize are Confederate Soldiers. Real History has ended the wound they made between my daughter and myself. We descend from the Rosamond Patriots, and Commodore Isaac Hull. These men made America Great! The Greatest has gone out of America.