Thee are many ancient Christians sects in Syria that the Kurds were protecting from ISIS who were beheading them. Frankli Graham is converned for their safety – after Trump unleashed hell upon the Kurds. 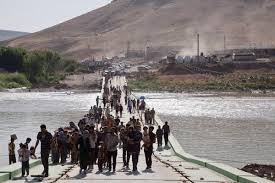 Today I heard Mount Sinjar is the resting place of Noah’s Ark.

Since the 12th century,[6] the area around the mountains have been mainly inhabited by Yazidis[7] who venerate them and consider the highest to be the place where Noah’s Ark settled after the biblical flood

What are the odds that out of all the mountains on the earth that the central hot spot in the middle east just happens to be located in the general vacinity of the final resting spot of Noah’s Ark on Mount Sinjar? I though it was recorded in the bible as being on Mount Ararat?
Well –actually not Mount Arart singlly speaking–since the bible says the Mountains –plural –of Ararat! That means one among a whole range of mountains!!