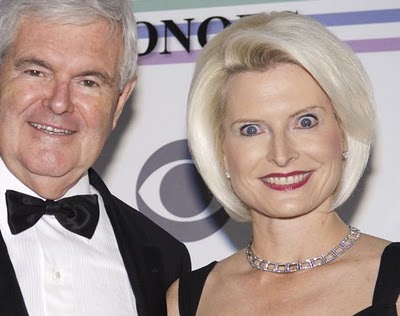 Newt Gingrich was converted to Catholicism by his present wife who wanted a fresh, clean, sin-free husband. Newt ‘Space Kitty’ attacked the secular left for trying to spoil the vision of the founding fathers, claiming it was a religious one. Prove it! Describe this vision!

Gingrich said that the religious foundation of America is being attacked on two fronts: “We have a secular elitist wing that deeply, deeply disbelieves in America, that wants to create a different country based on a different set of principles,” he said. “And we have a radical Islamist one which legitimately and authentically hates us and should.”

Is there a catholic saint for LSD? How about Saint Lucy of Diamonds at Tiffany?

Newt claims he is not being religious, but, claims there EXISTS a religious base that gives our Democracy “meaning”. Such as – not freeing the slaves. Not giving women the right to vote…