The Red Hand of Bond

{ Kehinde Andrews puts a target on the backs of royals by invoking the name of black extremists in regards to Harry and Meghan going to Africa.)

I found a Professor Kehinde Andrews Doll on T.V.  Give him his que, and he recites his three favorite words “Black Panther” and “Malcom X”. Then, its off to the bank to cash his check. American Black Radical Men sure have been good to Kehinde.

Marcus Garvey was blessing the Red Hand, like the one we see in the coat of Arms of James Bond a avatar created by my kin, Ian Fleming. In a virtual world taken over by computer devices, and where one powerful nation attacks another powerful nation via our computers: whereby a racist President is elected that honors neo-Confederate monuments and symbols, it stands to reason anyone who attempts to put these Brands on the side of good, should be – FUNDED and PROTECTED!

As an author I could go far with this Red Hand, and in a fictional manor create a hundred conspiracies that would cause people to buy my books and make me rich and famous. I could create my own comic book ‘The Red Hand’ in answer to ‘Black Panther’.

Kehinde Andrews has not replied to my e-mail because he knows with me ‘The Jig Is Up’. He is a snot-nosed headhunter, a British Subject who does well for himself in a ex-colonial empire, that saw the errors of their ways, ended slavery, and sent Men of War to blockade ports in Brazil in order to keep Portugal from bringing more slaves from Africa. Brazil did not end slavery until 1888. Outrageous!

In my next post I will introduce to you the white men and women who worked hard for Civil Rights in this country – before Martin Luther was born. What we are seeing is a Exclusiveness where blacks are saying they do not want the help of white people. Those who try, will be put through several gauntlets such as the one ‘She The People; foisted on Democrats. Surely the offspring of people who created a huge mess, should be given the opportunity – to rectify this disaster! Kehinde does not lay a glove on any Bubba in America. Why doesn’t he got after Lindsay Graham? I would buy a ticket!

Royal Bashing comes easy – to little men! King Trump is just the head of the monstrous snake that comes slowly out of the grass. Does Kehinde own a sword, or, a suit of armor? All he’s got, is some black skin………….and a big mouth!

(This is targeting. The Windsor family has received many death threats.}

What about this “Hollywood production? Would Malcom X approve? Hail King of Wakanda! Braun over Brains!

Hey – Professor! What kind of clothes is your hero wearing? Are those – regal clothes? With those plumes, we might be looking at………Royal Wear! Yes! That’s it. Now, add some swords and bodyguards driving their King around in a Rolls Royce, and you surely have the idea there’s some Post Colonialism Ideas going on here – with turned tables! I see a pattern here, black men go to prison and they come out kings and prophets!

Hypocrites garnishing more votes for King Bobo – who should be on his way to prison! Instead, we are playing Therapy Session Politics – again! Let’s heal the black people first for what white folks did to them. Then, its the turn of the Wounded Women. Then, the poor Gay folks need extra special attention and therapy. Let’s not forget Malcom X who got his ass blown away. Who cares! Beat Trump!!!! Go to the polls – and vote! Register folks!

On my way home to the dock where I lived on my boat, I saw a crowd gathered. There were about twenty Black Panthers doing their clenched fist routine. They were shouting at a white man in a white shirt who was giving a speech. I was blown away when I recognized Robert Kennedy’s voice. I could not believe he was – at that park! Everyone get’s killed at that park. Black gangs rumble – at that park! No white man had been – at that park – in seventy years. I pulled over and listened. Whoever booked Bobby – at that park – did not know Oakland. It was in the middle of the Oakland ghetto. He was being told the Panthers don’t want him there – in their park!  They must have invited him to meet with them – which he did – at midnight! They didn’t think he had the guts to show up!

All our hearts were broken when Bobby died. Young people may never have heard of him. If you want to know how to run a campaign (minus getting shot in a kitchen) study Bobby.

I walked out of ‘Black Panther’ during the fight for kingship! I hated the half-hearted dancing on the wall. I hated the queen on her thrown. I hated the dudes that came out of the cave. I hated the idea that these people made incredible flying machines, but, not a voting booth and machine. And most of all, I hated the lack of poverty which Huey Newton understood, and talked about every time he opened his mouth, even more than Jesus. Jesus appeared in a market place 162 times, and no meeting with a rich or royal person is recorded. You got to wake up!

Marcus Garvey did not live long enough to see two Irish Catholic brothers rise to the heights of American politics. He did not see them cut down, and have their brains blown out. Marcus admired the guts of the Irish Catholics. He emulated them.

Last week I wanted to ball up on the floor, in unfathomable pain, thinking about Bobby. Of all the things I have been through, all the injustice I have suffered, and my generation – not seeing Bobby Kennedy put his hand on the Bible and swear an oath of office of President of the United States of America – is more than I can bare. My generation is the Lost Generation. No generation has ever done so many things, right, to end up seeing so many things done wrong – to all of us!

Muhammad preached his own version of Islam to his followers in the Nation. According to him, blacks were known as the ‘original’ human being, with ‘evil’ whites being an offshoot race that would go on to oppress black people for 6,000 years. He preached that the Nation of Islam’s goal was to return the stolen hegemony of the inferior whites back to blacks across America.[2] Much of Elijah Muhammad’s teachings appealed to young, economically disadvantaged, African-American males from Christian backgrounds.[16] Traditionally, Black males wouldn’t go to church because the church did not address their needs. Elijah Muhammad’s program for economic development played a large part in the growth in the Nation of Islam. He purchased land and businesses to provide housing and employment for young black males.[16]

By the 1970s, the Nation of Islam owned bakeries, barber shops, coffee shops, grocery stores, laundromats, night-clubs, a printing plant, retail stores, numerous real estate holdings, and a fleet of tractor trailers, plus farmland in Michigan, Alabama, and Georgia. In 1972 the Nation of Islam took controlling interest in a bank, the Guaranty Bank and Trust Co. Nation of Islam-owned schools expanded until, by 1974, the group had established schools in 47 cities throughout the United States.[17] In 1972, Muhammad told followers that the Nation of Islam had a net worth of $75 million.[5]

In 1946, at the age of 21, Malcolm was sent to prison on a burglary conviction. It was there he encountered the teachings of Elijah Muhammad, the leader of the Nation of Islam, whose members are popularly known as Black Muslims. The Nation of Islam advocated black nationalism and racial separatism and condemned Americans of European descent as immoral “devils.” Muhammad’s teachings had a strong effect on Malcolm, who entered into an intense program of self-education and took the last name “X” to symbolize his stolen African identity.

Nonetheless, the rise of white-nationalist violence during Trump’s tenure is emerging as an issue as the president turns his attention toward his reelection campaign.

According to the most recent annual report by the Anti-Defamation League (ADL), which has long tracked extremist activity, 39 of the 50 extremist-related murders tallied by the group in 2018 were committed by white supremacists, up from 2017, when white supremacists were responsible for 18 of 34 such crimes.

Trump has previously played down the threat posed by white nationalism. After a gunman last month killed 49 Muslims in two consecutive mosque attacks in New Zealand, Trump was asked by a reporter whether he thought white nationalists were a growing threat around the world. “I don’t, really,” Trump replied. “I think it’s a small group of people that have very, very serious problems.”

Garvey paid attention to and was inspired by Ireland, naming a headquarters in Harlem “Liberty Hall” after the building in Ireland, which was the headquarters of the ITGWU and the Irish Citizen Army. Garvey believed “We have a cause similar to the cause of Ireland”

The union was founded by James Larkin in January 1909 as a general union.[1][2] Initially drawing its membership from branches of the Liverpool-based National Union of Dock Labourers, from which Larkin had been expelled, it grew to include workers in a range of industries. The ITGWU logo was the Red Hand of Ulster, which is synonymous with ancient Gaelic Ulster.

The ITGWU was at the centre of the syndicalist-inspired Dublin Lockout in 1913, the events of which left a lasting impression on the union and hence on the Irish Labour Movement.

After Larkin’s departure for the United States in 1914 in the wake of the Lockout, James Connolly led the ITGWU until his execution in 1916 in the wake of the Easter Rising. In turn, William X. O’Brien became the union’s leading figure, and ultimately served as general secretary for many years. Throughout World War I, the ITGWU consistently opposed Irish belligerence, and staunchly supported the advanced nationalist cause. In fact, ITGWU members, in the uniform of the Irish Citizen Army, played a leading role in the Easter Rising, while the Transport Union led a national strike that crippled an attempt to introduce conscription to Ireland in 1918.[3]

James Bond Fans have gone over every Bong Thing with a fine-tooth comb, and, can not answer the riddle of the Red Hand of Ulster being in the Bond cote of arms. 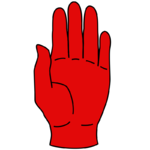 The Red Hand of Ulster, right and left hand versions

The Red Hand of Ulster (Irish: Lámh Dhearg Uladh) is an Irish symbol used in heraldry[1] to denote the Irish province of Ulster. It is an open hand coloured red, with the fingers pointing upwards, the thumb held parallel to the fingers, and the palm facing forward. It is usually shown as a right hand, but is sometimes a left hand, such as in the coats of arms of baronets